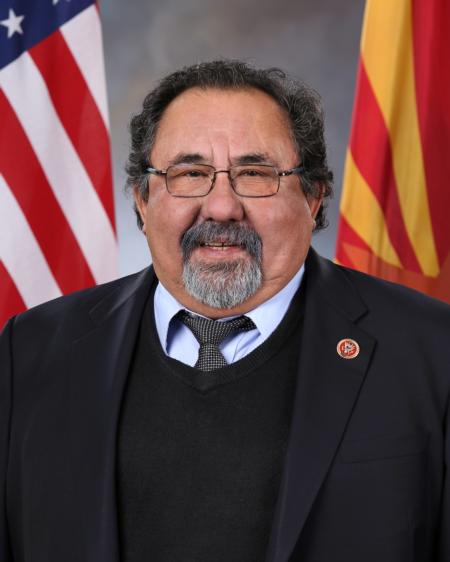 Contact Representative Raúl Grijalva
Raúl Manuel Grijalva is an American politician who serves as the U.S. Representative for Arizona's 3rd congressional district, serving since 2003. He is a member of the Democratic Party.

Raúl Grijalva began his career in public service as a community organizer in Tucson. Four decades later, he continues to be an advocate for those in need and a voice for the constituents of his home community. From 1974 to 1986, Raúl served on the Tucson Unified School District Governing Board, including six years as Chairman. In 1988, he was elected to the Pima County Board of Supervisors, where he served for the next 15 years, chairing the Board for two of those years. Raúl resigned his seat on the Board of Supervisors in 2002 to seek office in Arizona’s newly created Seventh Congressional District. Despite a nine-candidate primary and the challenge of being outspent three-to-one by his closest competitor, Raúl was elected with a 20-point victory, thanks to a diverse coalition of supporters that led the largest volunteer-driven election effort in Arizona.

Throughout his career, Raúl has always fought for underrepresented voices. The passions that drove him as a School Board member to fight for and succeed at implementing bilingual education in Arizona are the same passions that motivated him to help pass the first bond package containing a $10 million commitment to reinvest in older, poorer neighborhoods while he was a County Supervisor. Likewise, they are what drive him today as he fights to reform our broken immigration system, ensure livable wages for American workers, and create vital land protections to safeguard our nation’s natural treasures for the next generation.