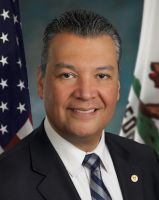 Contact Senator Alex Padilla (D-CA)
Alejandro Padilla is an American politician and engineer serving as the junior United States senator from California since 2021. A member of the Democratic Party, Padilla served as the 32nd secretary of state of California from 2015 to 2021.

The proud son of immigrants from Mexico, Senator Alex Padilla believes in giving everyone a fair shot at the American dream. A progressive problem solver, Alex has dedicated his career to finding solutions to the toughest challenges and fighting for communities that are too often left out and left behind.

Alex Padilla is a lifelong Californian. He was born and raised in the proud, working class community of Pacoima, in the San Fernando Valley. Alex’s parents immigrated to Los Angeles from different parts of Mexico in the 1960s. Once in California, they met, fell in love, and applied for green cards.

Alex’s parents had little formal education, but they shared a strong work ethic and big dreams. For forty years, Alex’s father worked as a short order cook in various Los Angeles diners. For the same forty years, his mom worked cleaning houses. They instilled in Alex, his sister, and his brother the importance of getting a good education as well as the value of service to others. As a result, Alex spent many weekends at community clean-ups and other neighborhood service projects.

Alex attended Los Angeles public schools and graduated from San Fernando High School. While his first love was baseball, he also excelled in math and science. With the encouragement of several teachers, he applied and was accepted to the Massachusetts Institute of Technology (MIT) where he earned a Bachelor of Science degree in Mechanical Engineering.

After graduating from MIT, Alex returned home eager to begin his career. However, a rising tide of anti-immigrant sentiment in California at the time drew Alex towards politics. He knew he had to take a stand against cynical rhetoric demonizing people like his parents, friends, and neighbors. In 1994, Alex joined protests against California’s Proposition 187, which sought to deny public benefits to immigrants. He went on to manage political campaigns for several legislative candidates and served as a field representative for Senator Dianne Feinstein.

In 1999, at the age of 26, Alex was elected to the Los Angeles City Council to represent the district where he grew up. In 2001, just two years later, he was elected by his colleagues to serve as President of the City Council—the youngest person in city history and the first Latino in over 100 years to hold the position. Alex served as acting Mayor of Los Angeles during the aftermath of 9/11, leading the city through a time of heightened security and tensions. As a council member, he worked to create economic opportunity zones in his district and reduce crime through improved community-police relations.

In 2006, Alex was elected to California’s State Senate, where, over the course of two terms, he became known as one of California’s most effective state legislators. A problem-solver with an ability to build consensus, Alex authored landmark bills requiring nutritional information on restaurant menus, streamlining the process for community college students seeking to transfer to four-year universities, phasing out single-use plastic bags, and mandating the deployment of the state’s earthquake early warning system. For six years, he served as Chair of the State Senate Committee on Energy, Utilities, and Communications, where he was instrumental in developing California’s renewable energy and climate policies—among the most ambitious in the world—as well as expanding access to broadband and modernizing California’s electrical grid.

In 2014, Alex was elected California Secretary of State, the first Latino in state history to serve in the office. As Secretary of State, he worked to make elections more accessible and inclusive while protecting the integrity of voting systems. Alex helped establish automatic and same-day voter registration, secured $500 million to upgrade California’s voting systems to meet higher security standards, and oversaw the implementation of the landmark Voter’s Choice Act, which expanded mail-in and in-person early voting. Under Alex’s leadership, the state reached a record high number of more than 22 million Californians registered to vote and the highest percentage of eligible citizens registered to vote in 80 years.

In January 2021, Alex was appointed to the United States Senate to fill the vacancy created by the election of Vice President Kamala Harris. He was sworn in on January 20, 2021 and is the first Latino to represent California in the U.S. Senate.

Alex’s top priority upon entering the U.S. Senate has been to address the COVID-19 pandemic and deliver equitable economic relief for working families and communities across California. Since being sworn in to office, Padilla has established himself as a champion of voting rights, climate action, and ensuring everyone has a fair shot at the American dream.

Alex is the first Latino to serve as Chairman of the Senate Judiciary Subcommittee on Immigration, Citizenship, and Border Safety. His first bill, the Citizenship for Essential Workers Act, seeks to create a pathway to citizenship for undocumented immigrants who served as government-recognized essential workers in key sectors during the COVID-19 pandemic. He is also a member of the Senate Committees on Budget; Environment and Public Works; Homeland Security and Governmental Affairs; Judiciary; and Rules.

Alex lives in the San Fernando Valley with his wife, Angela, and their three sons, Roman, Alex, and Diego.