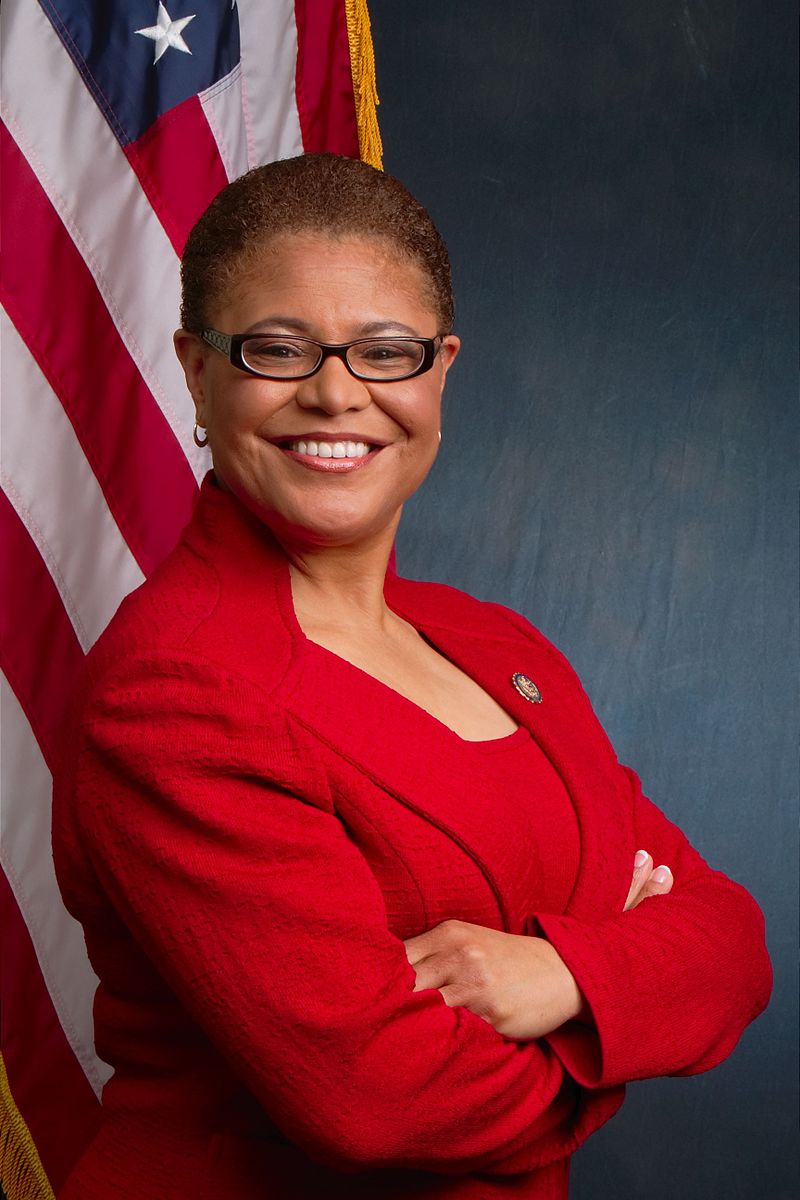 Contact Representative Karen Bass
Karen Ruth Bass is an American politician serving as the U.S. Representative for California's 37th congressional district since 2011. The district, numbered as the 33rd district for her first term, covers several areas south and west of downtown Los Angeles.

Congressmember Karen Bass was re-elected to her sixth term representing the 37th Congressional District in November 2020. Congressmember Bass serves on the House Committee on Foreign Affairs where she is the Chair of the Subcommittee on Africa, Global Health, and Global Human Rights. She also serves on the House Judiciary Subcommittee on Crime and Terrorism, where she is active in working to craft sound criminal justice reform policies.

Congressmember Bass has served on the House Foreign Affairs Subcommittee on Africa, Global Health, Global Human Rights and International Organizations for as long as she’s served in Congress. As Chair of the Subcommittee, Congressmember Bass has acted to build coalitions and support economic growth and partnerships with the African continent, with a goal to transform how the United States engages with African nations and to promote the many opportunities to expand trade and economic growth between America and African nations. In 2015, Congressmember Bass acted swiftly during her first term to bring legislators, advocacy groups and international leaders together to extend the third country fabric provision of the African Growth and Opportunity Act (AGOA). The provision supports stability, development, and economic growth of sub-Saharan African countries by protecting jobs in the apparel sector and providing some of the best markets for American businesses to sell their goods and services. Congressmember Bass has traveled to the continent upwards of 30 times and continues to push to increase the diversity among our diplomatic corps serving there.

Congressmember Bass has also served on the Judiciary Committee since 2012. Her work on this committee includes passing sweeping criminal justice reforms including the First Step Act and reforms to our prison system with an eye on how women are treated in prisons. Congressmember Bass also helped pass the Equality Act of 2020, which would provide consistent and explicit anti-discrimination protections for LGBTQ people across key areas of life, including employment and housing. She also serves on the House Judiciary Subcommittee on Courts, Intellectual Property, and the Internet where she works on protections of intellectual property right infringements that threaten the economic health of the 37th District. On this committee, Congressmember Bass also voted to impeach the 45th President of the United States.

Upon arriving in Congress, Chairwoman Bass founded the bipartisan Congressional Caucus on Foster Youth. The caucus has a membership of more than 150 Members of Congress who are dedicated to improving the child welfare system and has successfully promoted passage of many key policies aimed at improving the nation’s foster care system.

Prior to her election to Congress, Chairwoman Bass served in the California State Assembly, where in 2008, she made history by becoming the first-ever African-American woman in U.S. history to serve as Speaker of any state legislature. During her tenure as Speaker, California endured its greatest economic crisis since the Great Depression. Under her leadership, the State Assembly came together to address the financial emergency with legislation to help Californians affected by the economic crisis. For her action, she was one of four legislative leaders awarded the John F. Kennedy Profile in Courage Award in 2010.

In the early 1990s, she convened a small group of community organizers, both African-American and Latino, and founded Community Coalition, known locally as CoCo. CoCo’s mission is to help transform the social and economic conditions in South Los Angeles that foster addiction, crime, violence and poverty by building a community institution that involves thousands in creating, influencing and changing public policy. CoCo has become a nationally known community institution that has successfully changed many areas of public policy and trained a new generation of leaders.

Congressmember Bass had one daughter, Emilia Bass-Lechuga and son-in-law Michael Wright. She continues to be inspired by Emilia and Michael’s passion for life. Emilia planned to follow in her mother’s footsteps working for social change. Congressmember Bass also has four step children.