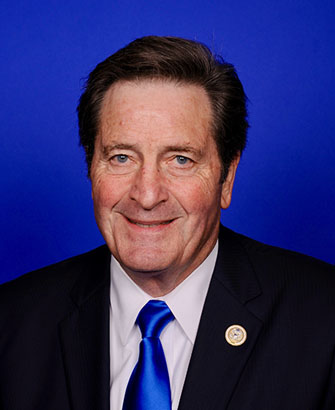 Contact Representative John Garamendi
John Raymond Garamendi is an American businessman, politician, and member of the Democratic Party who has represented areas of Northern California between San Francisco and Sacramento, including the cities of Fairfield and Suisun City, in the United States House of Representatives since November 2009.

John Garamendi was raised on his family’s ranch in Mokelumne Hill, California. He received his B.A. in business from UC Berkeley where he was a Wheeler Scholar, second team All America offensive guard, two-time all Pacific Coast Conference team, and the 1964 West Coast heavy weight wrestling champion. He also holds an MBA from Harvard Business School. He and his wife Patti served in the Peace Corps in Ethiopia before returning to the U.S and settling down in Walnut Grove, where they raised six children. They now have 14 grandchildren and continue to raise Angus cattle on their ranch and grow pears in their Delta orchard in Walnut Grove.

Elected to the state legislature in 1974, Garamendi authored the first solar, wind and energy conservation tax credit in the nation. He also authored the Rural Health Act of California to ensure that underserved residents in rural communities had access to quality health care. As a state senator, he established a work-oriented welfare program, developed a state agenda for economic competitiveness and scientific advancement, and authored legislation to fund the construction of research facilities across the UC system.

Appointed Deputy Secretary of the Interior in 1995 by President Clinton, Garamendi led the U.S. CALFED negotiating team in a process to restore the environment in the Sacramento and San Joaquin River basins, the Delta and San Francisco Bay, while improving water availability for farmers and the region’s rapidly growing cities. In what came to be known as the “Garamendi Process,” city leaders, farmers, fishing interests and environmentalists worked to resolve their differences and adopt mutually acceptable plans and policies to implement the Central Valley Improvement Act.

Building on his Washington experience and 30 years of experience in California water issues, Garamendi has become the leading advocate for a comprehensive water plan for all California. A plan that calls for water recycling, aquifer replenishment, Ag and urban water conservation, forest management, and off stream storage.

As California’s elected Insurance Commissioner in 1991-95 and again in 2003-6 Garamendi earned a reputation among state and national consumer organizations as the most effective protector of consumer interests in the nation. He successfully forced insurance companies to pay claims to policyholders, reduced homeowner, auto, and worker’s compensation rates, and significantly curtailed insurance fraud.

Elected Lieutenant Governor in 2007, he became Chairman of the State Land Commission where he successfully protected California coastal beaches and stopped further offshore oil and gas development. As Chairman of the California Commission for Economic Development, he led successful efforts to expand workforce development and vocational education. He became a University of California Regent, and CSU Trustee where he fought for increased funding for higher education and research. He voted against every proposal to raise undergraduate tuition.

Congressman Garamendi is the Chairman of the House Armed Services Subcommittee on Readiness where has enacted legislation to direct the military to reduce its greenhouse gas emissions, to prepare all bases to withstand the effects of climate change, improve military family housing, and remove toxic substances from drinking water in and around military installations. The Readiness Committee oversees over one-third of the Department of Defense’s annual budget, has jurisdiction over 1,100 military installations and bases worldwide, and oversees all U.S. military training, logistics, and equipment maintenance.

On the House Transportation and Infrastructure Committee, Congressman Garamendi has helped author a much-needed five-year bill to improve highways, a $1.5 trillion plan to rebuild American infrastructure, and four water resource development bills. Garamendi is also a member of four Transportation and Infrastructure Subcommittees: Coast Guard and Maritime Transportation, Water Resources and Environment, Railroads, Pipelines and Hazardous Materials, Economic Development, and Public Buildings and Emergency Management. In these capacities, he advances his “Make It In America” agenda to create new middle-class jobs and rebuild our nation’s crumbling infrastructure using American materials and workers.

As the former Ranking Member of the Subcommittee on the Coast Guard and Maritime Transportation, Garamendi became a leader in shaping America’s maritime and port policy to grow the America domestic fleet and improve ports to reduce air and water pollution. and to accommodate larger ships.

Promoting policies that create jobs, Garamendi has become the leading advocate for the Make It In America program to strengthen manufacturing. He is the author of four Make It In America bills that require that our tax money be spent on American-made equipment and jobs. His goal is to create a pathway to the middle class for thousands of hardworking Americans.

When Garamendi served as a member of the House Agricultural Committee, Garamendi helped shape a Farm Bill that gives family farmers access to national and international markets. He used his insurance experience to work across the aisle to improve the National Flood Insurance Program.