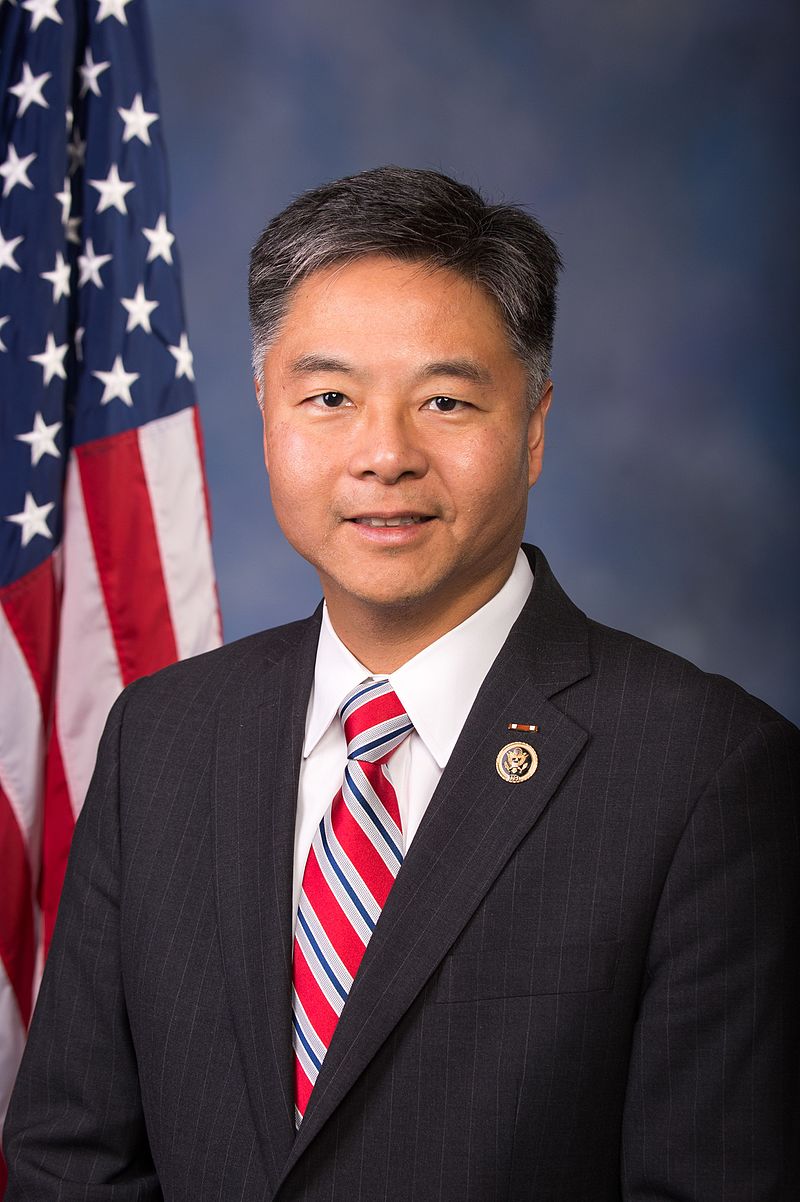 Contact Representative Ted Lieu
Ted W. Lieu is an American politician serving in his third term as the U.S. Representative for California's 33rd congressional district since 2015.

Ted W. Lieu represents California’s 33rd Congressional District in the United States House of Representatives. Ted is serving in his fourth term in Congress and currently sits on the House Judiciary Committee and the House Foreign Affairs Committee. He was also elected by his Democratic Colleagues this Congress to serve as a Co-Chair of the Democratic Policy and Communications Committee for a third time. Ted is a former active duty officer in the U.S. Air Force. Following active duty, Ted served in the Air Force Reserve, retiring with the rank of Colonel in 2021.

In Congress, Ted has established himself as a leader on the environment; cybersecurity; civil liberties; government ethics and veterans. He is also an outspoken proponent of more effective government oversight. Following the Jan. 6 insurrection, Ted co-authored the Article of Impeachment advanced by the House and subsequently served as an Impeachment Manager for the second Senate impeachment trial of President Donald Trump.

In addition to government reforms, Congressman Lieu is a champion of measures to reduce the harms of climate change. The first bill Ted introduced after coming to Congress was the Climate Solutions Act, which aims to make California’s ground-breaking renewable energy goals and climate emissions reduction targets a national model. In 2019 and again in 2021, Ted introduced an aggressive version of the legislation in order to tackle society’s most pressing issue. Ted is also a founder and co-Chair of the California Coastal Caucus, which advocates for issues that impact California’s coastal communities.

As one of only four computer science majors currently serving in Congress, Ted is frequently sought out for his insight on technology and innovation matters including cybersecurity, cloud computing and innovation as well as the sharing and creative economy. He has also introduced legislation to prioritize consumer safety in technologically-advanced cars as well as legislation that would ensure law enforcement and tech companies protect consumer privacy.

Ted has been a leader in Congress against ethnic and racial profiling, including discrimination against the LGBT community and hate toward the Asian American community. He serves as Whip of the Congressional Asian Pacific American Caucus, Vice Chair of the LGBT Equality Caucus, and Co-Chair of the Cloud Computing Caucus.

Prior to being elected to Congress in 2014, Ted served as a California State Senator from 2011 to 2014, and before that, as a State Assemblyman from 2005 to 2010. Ted’s legislative accomplishments included authoring landmark legislation regulating the subprime mortgage industry; a first-in-the-nation ban on gay conversion therapy for children; and a first-in-the-nation ban on the use of tanning beds for minors. Ted fought for California state tax reform that saved small businesses from millions in retroactive taxes, and tax incentives for film and TV production. Ted also co-authored California’s landmark Global Warming Solutions Act and co-authored the law banning state pension funds from investing in Iran’s nuclear and energy industries.

Ted started his elected service as a Member of the Torrance City Council in 2002. Prior to serving on the Council, Ted was a Torrance Environmental Quality Commissioner.

Looking for a better life and opportunity, Ted and his family immigrated to the United States when he was three years old. Settling in Cleveland, Ohio, Ted’s parents sold gifts and jewelry at flea markets to make ends meet. They were eventually able to operate six gift stores, where Ted and his younger brother worked as teenagers. With the support of hard-working parents and a country that provided limitless opportunity, Ted would go on to attend Stanford for his undergraduate degrees in Computer Science and Political Science, and then Georgetown University, where he received his law degree magna cum laude after serving as Editor-in-Chief of the law review. Ted also received four American Jurisprudence Awards.

Recognizing the great opportunities America had given to his family, Ted wanted to serve his country to preserve the American Dream. He joined the United States Air Force, where he served in the JAG corps. After serving on active duty for four years, Ted continued to serve his country and joined the Air Force Reserve before retiring from the Air Force in 2021. Ted received numerous medals for his outstanding military service, including the Air Force Humanitarian Service Medal and multiple Meritorious Service Medals.

Ted’s wife, Betty, is a member of the Torrance Board of Education and a former California Deputy Attorney General. They live in Torrance with their two sons, Brennan and Austin.