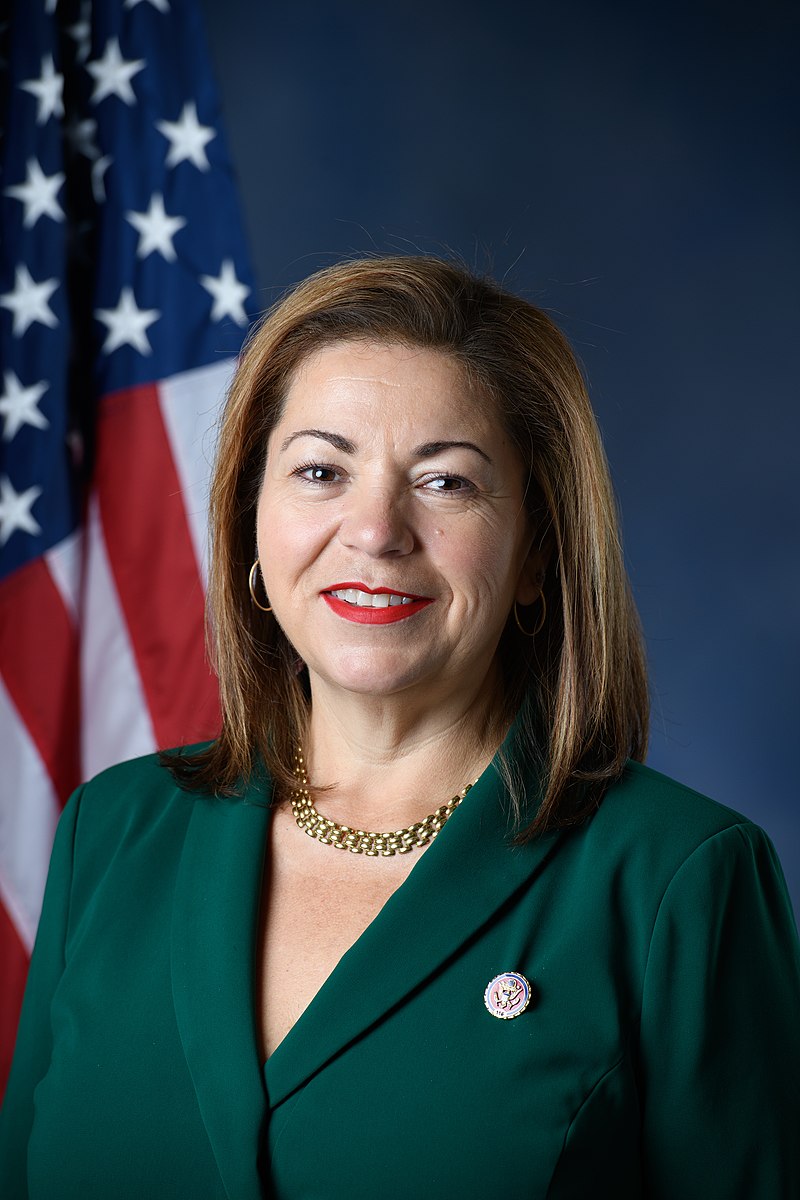 Contact Representative Sánchez Linda
Linda Teresa Sánchez is an American politician and former labor lawyer who currently serves as the U.S. Representative for California's 38th congressional district. She is a member of the Democratic Party and was first elected to Congress in 2002.

A former labor lawyer, Linda T. Sánchez represents California’s 38th congressional district – but the first thing her family and friends will tell you is that she’s never stopped “kicking ass for the working class.” Most of all, she is also a proud mom, dog lover, and Dodgers fan.

Elected to the U.S. House of Representatives in 2002, Sánchez is the first Latina to serve on the powerful House Committee on Ways and Means and the House Judiciary Committee. A lifelong progressive, Sánchez has devoted her career to helping working people get ahead: advocating for families, improving America’s education system, and bringing jobs to Southern California.

Linda Sanchez and her family

Sánchez was born in Orange, California, the sixth of seven children, to immigrant parents from Mexico. Her father Ignacio worked as an industrial machinist and mechanic at a plastics and rubber plant, and her mother Maria was an elementary school teacher who decided to further her education by attending school at night. Growing up in a proud Latino household, Sánchez’s parents inspired her to take advantage of the opportunities they never had.

When reflecting upon the importance that her family and parents had in her life, Sánchez says, “In every Latino family, there’s a sense of ‘We need to stick together.’ But I think in our particular family, that’s even stronger because our folks expected great things from us. They wanted us to take advantage of all the opportunities they never had.”

Throughout her time in Congress, Sánchez has been a steadfast advocate for working people, including improving school safety; enabling more women, minorities, and veterans to establish small businesses; reforming the tax code to provide relief for long-term caregivers; bringing scrutiny to the misuse of arbitration that unfairly harms workers; and keeping families in their homes through changes to bankruptcy law. She has been a staunch advocate for Alzheimer’s beneficiary and caregiver support, having lost her father and watching her mother suffer from the disease.

Sánchez currently serves on the House Committee on Ways and Means, where she advocates for the protection of Social Security and Medicare, fairness for U.S. workers and businesses in trade agreements, and an even playing field for the middle class through tax code reform. As an active member of that committee, the Congresswoman has championed many bills that have become law. Among her proudest achievements are a bill to assist small businesses in providing retirement benefits for their employees; enhanced customs enforcement; as well as bills to improve mental health coverage related to opioid addiction recovery. She has fought to improve childcare funding options for working parents and remains committed to shoring up pension funding for workers across the county. Sánchez also proudly secured a parcel of land in Norwalk, California that formerly served as a tank farm property for her local community to redevelop.

In addition to co-founding the Congressional Labor and Working Families Caucus, Sánchez has also served in several leadership positions. From 2011 to 2017 (112th–114th Congresses), she was the Ranking Member of the House Ethics Committee. In the 114th Congress, Sánchez served as Chair of the Congressional Hispanic Caucus (CHC). During the 115th Congress (2015–2017), Sánchez served as Vice Chair of the House Democratic Caucus. She is the first Latina elected to a leadership position in the U.S. Congress.

In addition to Ways and Means, she has also served on the following committees: Judiciary, Ethics, Oversight and Reform, Small Business, Education and Labor, Veterans’ Affairs, Foreign Affairs, and the Select Committee on Benghazi.

As the only first-term Democrat to earn a seat on the Judiciary Committee during the 108th Congress (2003–2005), Sánchez sponsored measures to improve school safety. From her seat on the Small Business Committee, she worked to assist women, minorities, and veterans establish businesses. In 2008, as Chairwoman of the House Judiciary Subcommittee on Commercial and Administrative Law (CAL), Sánchez led an investigation into the politicization of the Department of Justice and another investigation into the firing of nine U.S. attorneys during the Bush administration.

In 2009, Sánchez helped expose the dangers of concussions in the National Football League (NFL), which resulted in changes to how football teams and youth sports address concussions. During a Judiciary Committee hearing, Sánchez confronted NFL Commissioner Roger Goodell for denying the link between football and cognitive decline saying, “The NFL has this blanket denial or minimizing of the fact that there may be this link. And it sort of reminds me of the tobacco companies pre-’90s when they kept saying, ‘Oh, there’s no link between smoking and damage to your health.’”

From her seat on the Ways and Means Committee, Congresswoman Sánchez in 2016 introduced bipartisan legislation to provide tax deductions for caregivers who incur expenses for long-term care for spouses or other dependent relatives. In 2009, Sánchez introduced the Gender Equity in Health Premiums Act, to bar health insurance companies from charging women more for health care premiums than men. The Gender Equity in Health Premiums Act became part of the Affordable Care Act, which President Obama signed into law in 2010.

From 2014-2016, Sánchez served as a member of the Select Committee on Benghazi, which was formed to further investigate the Benghazi attack on September 1, 2012. She spoke out against the politicization and costliness of the committee, in which the final report found no new evidence of wrongdoing.

Prior to her service in the House of Representatives, Sánchez worked as an attorney practicing appellate law, civil rights, and employment law. After the 1998 election, Sánchez worked for the International Brotherhood of Electrical Workers (IBEW) Local 441 and the National Electrical Contractors Association (NECA) as a compliance officer on public works and prevailing wage issues. In 2000, she was elected executive director of the Orange County Central Labor Council, AFL-CIO.

In 2002, Sánchez ran for a seat in the U.S. House of Representatives from a new working-class district created after the 2000 Census. At 34 years old, she was the first woman IBEW member elected to Congress. She and her sister Loretta, who was in the House from 1997 to 2017, are the first women of any relation to serve together in Congress.

Sánchez is one of the few women to play in the Congressional Baseball Game, where Democrat and Republican Members of Congress play against each other for charity. She was the only woman on the field for more than a decade and was awarded the Democrat’s MVP award in 2015. A pinch-hitter, she wears “IX” as her number to represent Title IX, the landmark legislation that gave women equal opportunity in higher education and sports. In 2009, a Congressional Women’s Softball Game was started and Sánchez played on both teams for a few years, ultimately sticking with her true passion, baseball.

Sánchez is the proud mom of Joaquín, born in 2009. She is only the eighth woman in history to give birth while serving in Congress. They live with their dog, Scully.