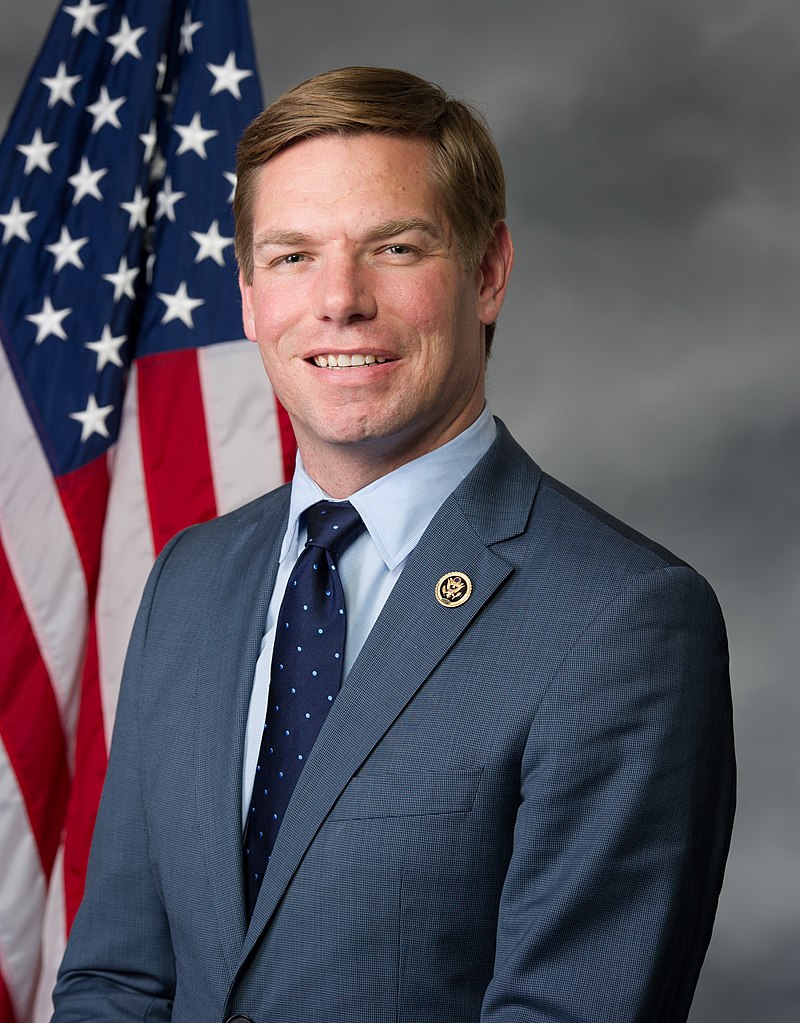 Contact Representative Eric Swalwell
Eric Michael Swalwell is an American politician serving as the U.S. Representative for California's 15th congressional district since 2013. A member of the Democratic Party, his district covers most of eastern Alameda County and part of central Contra Costa County.

Growing up in what now is California’s Fifteenth Congressional District taught Eric Swalwell a lot about hard work, strong principles, and planning for a brighter future.

The oldest of four boys and son to Eric Sr., a retired police officer, and Vicky, who works as an administrative assistant, Swalwell was raised and attended public schools in the East Bay. A Division I soccer scholarship was his ticket to becoming the first person in his family to go to college. During college, he worked as an unpaid intern in the office of his representative, Congresswoman Ellen Tauscher, and so was on Capitol Hill on September 11, 2001. This inspired his first legislative achievement: using his Student Government Association position to create a public-private college scholarship program for students who lost parents in the attacks.

After earning undergraduate and law degrees from the University of Maryland, he returned to the East Bay to serve as a prosecutor in the Alameda County District Attorney’s Office for seven years. He also served as chairman of the Dublin Heritage & Cultural Arts Commission, on the Dublin Planning Commission, and was elected to the Dublin City Council.

Eric Swalwell in 2012 was elected to represent California’s Fifteenth Congressional District, which includes a large part of the East Bay. Now in his fourth term, he’s working hard to bring new energy, ideas, and a problem-solving spirit to Congress, with a focus on advancing policies that support equality, opportunity, and security.

Congressman Swalwell serves on the House Permanent Select Committee on Intelligence, and believes protecting Americans is Congress’ most solemn duty. He chairs the Intelligence Modernization and Readiness Subcommittee, which oversees overall management of the Intelligence Community: the policies and programs focused on making sure that all 17 U.S. intelligence agencies have the workforce, infrastructure and services they need to succeed. This involves fostering greater collaboration and better use of resources across the entire Intelligence Community in personnel management, security clearance reform, information technology modernization, and other areas.

He serves on the House Judiciary Committee, where his experience as a prosecutor and as a son and brother of law enforcement officers informs his perspective on criminal justice reform while he also addresses issues including voting rights, LGBT equality, comprehensive immigration reform, and protecting a woman’s right to make her own health care decisions.

And he also serves on the House Homeland Security Committee and its Intelligence and Counterterrorism Subcommittee, working to protect America against violent extremism and domestic terrorism.

A leader in the House, he is co-chair of the Democratic Steering and Policy Committee, which makes committee assignments and sets the caucus’ policy agenda. He also founded and is chairman emeritus of Future Forum, a group of almost 50 young Democratic Members of Congress focused on issues and opportunities for millennial Americans including student loan debt and home ownership.

But in keeping with his promise to work across the aisle, in his first term, Congressman Swalwell co-founded the bipartisan United Solutions Caucus to bring new Members together; the group met regularly to advance common-sense solutions and overcome the partisan divide. And in his second term, Swalwell cofounded the bipartisan Sharing Economy Caucus to explore how this burgeoning new economic sector can benefit more Americans.

Congressman Swalwell’s first-term legislative accomplishments included two of his bills signed into law – tied for the most bills signed by any freshman Member of his class – including one that incentivized charitable giving after Typhoon Haiyan devastated the Philippines. And, while serving on the Homeland Security Committee in his first term, he led a successful effort opposing a TSA proposal to allow certain knives aboard airplanes and advocated for enhancing airport perimeter security with innovative technological solutions.

Even while addressing national and international issues, Congressman Swalwell remains rooted in the region he represents. He is present and attentive in the district, and was an early leader in adopting social media and video-conferencing technology to stay in constant contact with constituents.