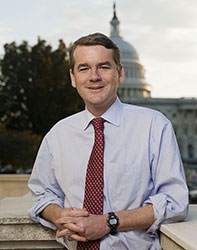 Contact Senator Michael Bennet (D-CO)
Michael Farrand Bennet is an American businessman, lawyer, and politician who has served as the senior United States Senator from Colorado since 2009. A member of the Democratic Party, he was appointed to the seat when Senator Ken Salazar became Secretary of the Interior.

Senator Michael Farrand Bennet is an American Politician, lawyer, and businessman from Colorado. He has been serving as a senior U.S. Senator under the Democrats since 2009.

Bennet worked as the managing director of the Anschutz Investment company. He was also once the Chief of Staff to Mayor John Hickenlooper, and later, the superintendent of Denver Public School.

Bennet was born in India on November 28, 1964. Yet, he grew up with his family in Washington. He graduated from Wesleyan University with a Bachelors’ Degree in 1987.

Bennet started his career as an aide to the Ohio Governor. He then proceeded to Yale Law School, where he acquired his J.D. in 1993. After his J.D. He worked as a clerk and later as a counsel for the U.S. Deputy Attorney General. He also worked as a special assistant to the U.S. Attorney for Connecticut.

In 1997, Bennet became the director of Anschutz Investment company in Denver. His work in restructuring and guiding troubled and bankrupted businesses earned him Denver’s Chief of Staff in 2003.

In 2005, he became the Superintendent of Denver Public Schools. He garnered public notice for his notable work in improving the failing state of Denver education

In 2009, Governor Ritter appointed Senator Michael Bennet to fill the U.S Senate seat when Ken Salazer became the secretary of Interior. Bennet ran for the seat after Ken’s term and won in 2010 and 2016. He also chaired the Democratic Senatorial Campaign Committee in 2014.

In 2019, Bennet announced his interest in representing the Democrats for the U.S. President. He dropped out during the primary elections in 2020

While in the Senate, Bennet was a strong ally of the former U.S. President Barack Obama.

Bennet is a co-sponsor of the amendment of the Equality Act to include sexual orientation and gender identity.

He was also known for his bipartisan support for his legislative proposals.

Senator Michael Bennet’s works on immigration reforms is his most significant work in the Senate. He co-sponsored the Dream Act, which gives residency to immigrants in military or high schools.

He was also part of the eight Senators as a bipartisan group that introduced comprehensive immigration reform legislation.

Also, he was one of the Senators who spearheaded the immediate attempt to reunite 539 immigrant children and families.

Senator Michael Bennet’s influence on the educational sector is also noteworthy. He pledged to ensure equal access to quality education by 2028. He also ensured the broadening of technology for schools.

Bennet’s work on reforming gun laws earned him a C+ grade from the National Rifle Association. He voted against the reinstatement of banned assault weapons and called for stricter gun control. He also implored a background check on secondary firearm sales

Bennet’s senate campaign was reportedly in debt of $374,819 to Bennet himself. His campaign committee is still paying off two loans, amounting to $750,000. The loans stemmed from his primary and general elections.

Also, while working as Denver’s superintendent, his decisions led to a positive outlook on the educational system. The schools, however, went into debt worth tens of millions under his watch. Bennet also suffered prostate cancer in which he was treated for in 2019