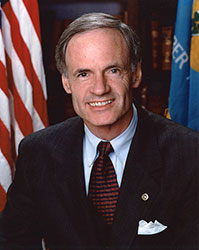 Contact Senator Tom Carper (D-DE)
Thomas Richard Carper is an American politician serving as the senior United States Senator from Delaware, having held the seat since 2001. A member of the Democratic Party, Carper served in the United States House of Representatives from 1983 to 1993 and was the 71st governor of Delaware from 1993 to 2001.

Senator Thomas Richard Carper is an American politician. He has served as a U.S. Senate under the Democrats since 2001. Formerly a military officer, Carper served in the U.S. House of Representatives from 1983 to 1993. He was also a former Governor of Delaware from 1993 to 2001.

Carper was born in Beckley, West Virginia, on January 23, 1947. He graduated from Ohio University with a B.A. in Economics in 1968. After his graduation, he enrolled as a Naval Flight Officer in the U.S. Navy from 1968 to 1973. He obtained an MBA from the University of Delaware in 1975.

Senator Tom Carper served as the state treasurer for the state government of Delaware from 1977 to 1983. He led the development of Delaware’s first cash management system. In 1991, he retired as a Captain from the U.S. Naval Reserve after 18 years of service.

Senator Tom Carper started his political career as a campaign aide to presidential aspirant Eugene McCarthy in 1968. He also served as Delaware’s state treasurer from 1976 till 1983.

In 1982, Carper won his position to the only seat in the U.U house of Representatives. He took over from the Republican’s incumbent and was re-elected four times.

During his time at the U.S. Senate, Senator Tom Carper worked on healthcare reforms, improving the environment while ensuring the effective running of federal programs.

As a top Democrat, Carper was a principal advocate for the protection of the air and environment. He defended several environmental and air regulations from attempts to repeal them. Carper saw the creation of the highest fuel efficiency standards. He also led the effort to reduce air pollution from the combustion of diesel.

In his continued hard work at the Senate, Carper focused on ensuring national security and improving cybersecurity. Carper worked extensively on gun law reforms. He requested executive action to reduce gun violence in the U.S.

Senator Carper has faced several accusations of abuse scandals from his ex-wives. He was also accused of abusing his wife’s two children from a previous relationship.

In 1998, Carper finally admitted that the allegations were true. He then apologized, affirming his zero-tolerance against domestic and child abuse.

Carper was also caught uttering unethical expletive words at a virtual Senate hearing in 2020. The virtual meeting was a Senate hearing on United States Postal Service, aired live and uncensored.

During the hearing, Senator Tom Carper seems to be having an issue with his internet connection. He turned away his computer in frustration and shouted the expletive in frustration. But, his colleague called his attention, and Carper muted his mic