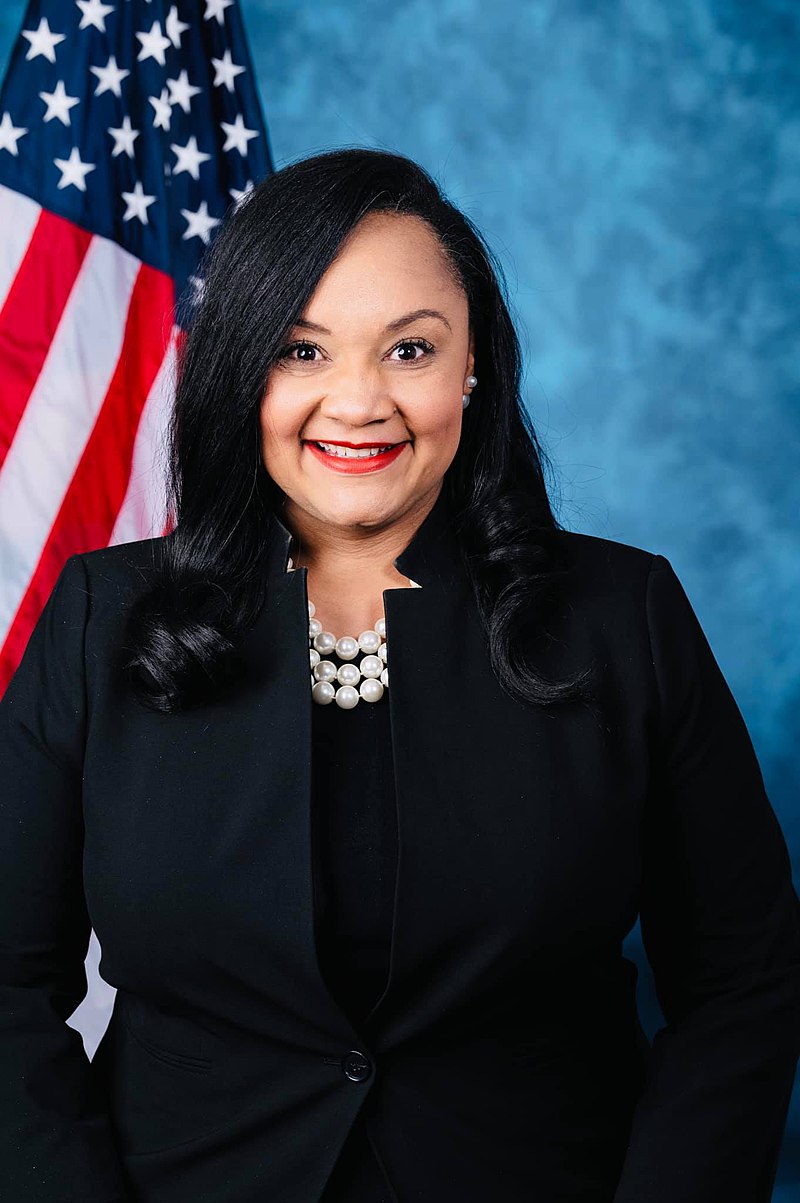 Contact Representative Nikema Williams
Nikema Natassha Williams is an American politician and political executive serving as a member of the Georgia State Senate for the 39th district. She is also the chair of the Democratic Party of Georgia. In November 2020, Williams became the representative for Georgia's 5th congressional district.

Congresswoman Nikema Williams has been a fierce advocate for social justice, women and families throughout her political and professional career.

As a Member of Congress, Congresswoman Williams continues to uplift the legacy of her mentor and predecessor, Congressman John Lewis, by fighting to prevent voter suppression and expand free and fair access to the ballot box.

She always centers the voices of those who are most marginalized. She brings this concern to Congress having seen firsthand how women and people of color continue to fight for racial and social justice in our country.

Congresswoman Williams was elected as the Freshman Class President for the 117th Congress. As President, she organizes and advances the interests of her Freshmen Democratic colleagues to fulfill their oath to work for the people. She currently sits on the Financial Services Committee, where she is Vice Chair of the Subcommittee on Investigations & Oversight, and the Transportation and Infrastructure. Congresswoman Williams is also a member of the Select Committee on the Modernization of Congress. She has membership in several caucuses including the Congressional Black Caucus, Democratic Women’s Caucus, Congressional Progressive Caucus, Voting Rights Caucus, LBGTQ+ Equality Caucus and the HBCU Caucus.

Congresswoman Williams has a passion for a number of legislative issues including voting rights, reproductive justice, social justice, economic justice and healthcare—her work addresses delivering on the promise of America for all.

Congresswoman Williams has a history of advancing the issues that matter to Georgians and underserved people across the country, regardless of their bank account or ZIP code. Before her congressional service, Congresswoman Williams served in the Georgia State Senate. As a State Senator, Williams got in the “Good Trouble” Congressman Lewis spoke about. In the wake of the disastrous 2018 Georgia elections, marked with rampant voter suppression, she was arrested at the Georgia State Capitol while peacefully protesting with her constituents, demanding that every vote be counted.

Congresswoman Williams was born in Columbus, GA and raised by her grandparents in Smiths Station, Alabama. She attended Talladega College – a liberal arts Historically Black College (HBCU) in Talladega, Alabama – where she was initiated into Chi Chapter of Alpha Kappa Alpha Sorority, Incorporated.

Congresswoman Williams has been recognized as one of Georgia Trend magazine’s 100 Most Influential Georgians, Forty under Forty, Power 30 Under 30, Outstanding Atlanta, and Who’s Who in Black Atlanta. As State Senator, she received the Freshman Legislator of the Year award from the Georgia Legislative Black Caucus and the 2020 Pinnacle Leadership Award from Delta Sigma Theta Sorority. Recently, she was awarded the ACLU of Georgia’s Dare to Create – Liberty Award.

Congresswoman Williams and her husband, Leslie Small, reside in Atlanta with their son, Carter.