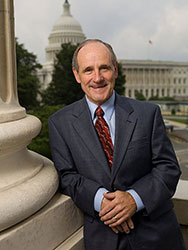 Senator James Elroy Risch is an American lawyer and politician. He has been serving as a junior Republican U.S. Senator from Iowa since 2009. He was a lieutenant governor of Idaho from 2003 to 2006.

He served as lieutenant governor again from 2007 to 2009 after serving as the Governor of Idaho from 2006 to 2007. Before delving into politics, Risch was a prosecuting attorney. He also taught criminal law at Boise State University.

He held the position till 1974 when he won a seat at the Idaho Senate. But, he was dramatically defeated by Democratic nominee Mike Burkett in 1988. Senator Jim Risch lost again to Roger Madsen in 1994. Yet, Governor Phil Batt appointed him to fill a vacant seat in the State Senate in 1995. In 2003, he became Idaho’s lieutenant governor till 2006.

Risch is renowned for his longstanding commitment to community service and passion for improving his quality of life.

He has implemented his result-focused approach to serve and protect the interest of his people. Committed to serving the people of Idaho, he has worked on advancing business in international trade and promoting exports. He was also an advocate for human rights, tackling drug and sex trafficking in the state.

In support of his anti-abortion advocacy, Risch co-sponsored the Child Interstate Abortion Notification. The Act will prevent minors from crossing state lines for abortion.

He has also worked to promote gun rights statewide and nationwide. He was endorsed with an A+ grade by the National Rifle Association. He advocates gun rights, stating that gun violence is not a reason for gun control legislation.

He also voted against the blockage of the sale of guns to people who are suspected or convicted terrorists.

Risch was part of 47 Republican senators who signed Senator Tom Cotton’s warning letter to Iran in 2015. But, the letter caused backlash from Congress and the Obama administration. He also voted to oppose the use of minimal force against Syria in 2013.

In 2019, Risch walked out of an interview with a reporter when asked about Trump’s involvement in a Ukrainian scandal