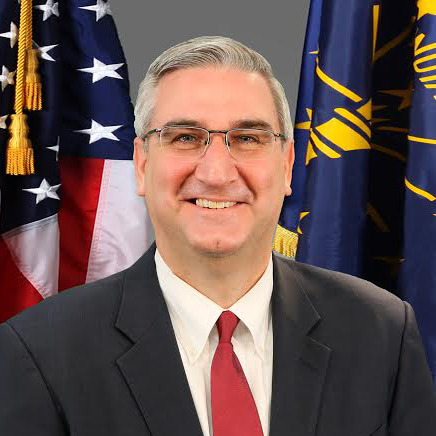 contact Governor Eric Holcomb
Governor Eric J. Holcomb is the 51st Governor of Indiana. A lifelong Hoosier, Gov. Holcomb is a veteran of the United States Navy, served as the state’s 51st Lt. Governor, was a trusted advisor to both Gov. Mitch Daniels and Sen. Dan Coats, worked for Congressman John Hostettler and is a former state chairman of the Indiana Republican Party. He was elected governor in November 2016. The governor is a graduate of Pike High School in Indianapolis and Hanover College in southeastern Indiana where he majored in U.S. History with a focus on the American Civil War and the Reconstruction Era. He is a collector of presidential signatures and currently has documents signed by all 44 of our nation’s presidents.

Eric Holcomb is Indiana’s 51st Governor, but you’re just as likely to find him on the basketball court (he’s made a basket in all of Indiana’s 92 counties) or at a local diner or gathering place (like the Cone Palace in Kokomo) as you are the Statehouse. Eric is laser-focused on fighting this pandemic and building One Indiana for All. That’s centered on growth, opportunity, and – as Eric says – is “people, people, people.”

For Eric, it’s about getting our economy Back on Track while protecting the health of Hoosiers. It’s about helping Hoosiers build the skills they need to land a good-paying job. It’s about helping Hoosiers rid themselves of a drug dependency, so they can lift up themselves and their families. And it’s about keeping Indiana the fiscal envy of the nation and delivering great government service at a great taxpayer value.

Member, Jobs for America’s Graduates Board of Directors, present