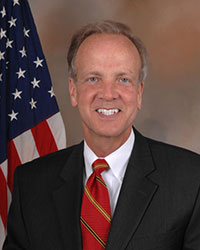 Senator Gerald Wesley Moran is an American lawyer and politician. He is serving as a senior U.S. Senator from Kansas under the Republicans. He was a member of the U.S. House of Representatives from Kansas 1st district.

Senator Jerry Moran was born in Great Bend, Kansas, on May 29th, 1954. Raised at Plainville, Moran graduated from the University of Kansas with a B.A. in economics in 1976.

After his J.D., Senator Jerry Moran practiced law at Stinson, Mag & Fizzell in Kansas. He later joined the Jeter & Larson Law Firm, where he practiced for 15 years. He served as a state assistant attorney general from 1982 to 1985. He was also the deputy attorney of Rooks County from 1987 to 1995. Moran taught political science at Fort Hays State University

In 1988, Moran won an election to the Kansas Senate and later served as the majority leader from 1995 to 1997. In 1996, Moran won a seat at the U.S. House of Representatives. He was re-elected six times and served from 1997 to 2011. He was a senior member of the House Committee on Agriculture.

In 2010, Moran won as the Republican nominee and ran for a seat in the U.S. Senate. He won 70% of the votes against Democratic nominee Lisa Johnston and other candidates. He was re-elected in 2016. He became a senior senator in 2021 after Pat Roberts retired from office.

As a member of the Special Appropriation Committee, he has pushed to oppose reckless spending and stricter funding standards.

His administration fosters several issues related to the state’s economy, empowerment, and tech. His works and reforms have also been a great help for the aviation industry in Kansas.

In his ambition to improve the Kansas economy, Moran’s administration has worked relentlessly to promote agriculture in the state.

He was one of the senators that warned that dairy farmers are facing huge market instability. He then urged his department to encourage farmers to consider the Dairy Margin Coverage Program. He also cosponsored the Transporting Livestock Across America Safely Act.

Moran sponsored the Pharmacy Competition and Consumer Choice Act. He is a co-founder of the Congressional Community Pharmacy Coalition. He is also the co-chair of the House Rural Health Care Coalition. But, Moran opposed the Affordable Care Act and the Medicare reform package

He was also one of 13 Senators who filibuster Obama’s administration Drone policy. They expressed concerns over the exploitation of drones to commit crimes in which President Obama couldn’t provide a convincing reply.

Also, he was criticized for opposing the creation of a panel to investigate the January 6th insurrection at the U.S. Capitol.