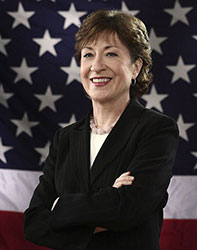 contact senator Susan Collins (R-ME)
Susan Margaret Collins is an American politician serving as the senior United States Senator for Maine. A Republican, she has represented Maine in the Senate since 1997. Born in Caribou, Maine, Collins is a graduate of St. Lawrence University in Canton, New York.

Senator Susan Margaret Collins is an American politician and businesswoman. She has served as a senior U.S. Senator from Maine under the Republicans since 1997.

Collins was born in Caribou, Maine, on December 7, 1952. She enrolled at the Caribou High School, where she was the president of her high school class. She earned a Bachelor’s degree in Government at St. Lawrence University in 1975. While at high school, Collins took part in the Senate Youth Program

Collins began her political career after her B.A. degree. She became a legislative assistant to U.S. Rep and Senator William Cohen in 1975. She also held various administrative positions while working for Cohen until 1987.

In 1987, Collins joined the cabinet of Governor John McKernan. There, she was the commissioner in the Department of Professional and Financial Regulations. She held the position till 1992. She served as the regional director for US Small Business Administration in 1992. But, she moved to Massachusetts in 1993 to serve as the Deputy State Treasurer. In 1994, she returned to Maine to run for the governorship position. Unfortunately for her, she received little support. Yet, she won her primaries but lost to Independent candidate Angus King.

Later in 1994, she founded the Center for Family Business at Husson College. She also served as its executive director till 1996. In 1996, Collins announced her desire to run for a seat at the U.S. Senate held by Cohen. That year, Cohen retired from the seat after becoming the U.S. Secretary of Defense. Collins won and took office the following year in 1997.

Collins has shown longstanding interest in improving access to affordable and quality healthcare. She was one of the senators that supported the Medicaid Coverage for Addiction Recovery Expansion Act. She also voted in support of the Affordable Care Act.

She founded the Senate Diabetes Caucus. She also founded the Task Force for Alzheimer’s Disease.

She is a pro-abortion rights advocate. Community service has always been a top priority for Collins. During her administration, she helped thousands of people of Maine resolve many of their issues.

She also furthered sustainable development. She was part of the Senators that worked in devoting billions to renewable energy development in the state. She voted against coal mining activities to avoid contamination of waterways.

In her bid to reduce gun violence, she voted for expanding background checks on gun purchases. She also voted against the ban of high-capacity magazines, a decision that earned her a C+ grade from the NRA.

Collins also worked on tax bills and reforms to reduce corporate taxes while reducing taxes for individuals too.

In 2013, Rand Paul led a drone filibuster due to his concerns over the use of drones on national security and safety. But, Collins was part of the Senators that did not support the filibuster.