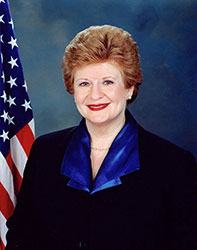 Contact Senator Debbie Stabenow (D-MI)
Deborah Ann Greer Stabenow is an American politician serving as the senior United States Senator from Michigan, a seat she was first elected to in 2000. A member of the Democratic Party, she became the state's first female U.S. Senator after defeating Republican incumbent Spencer Abraham.

Senator Debbie Stabenow is an American politician. She is a Senior United States Senator from the state of Michigan. She was first elected to this seat in 2000. She was a member of the U.S. House of Representatives before getting elected to the Senate.

Senator Debbie Stabenow was born in Gladwin, Michigan. She was raised in Clare, Michigan. She graduated from Clare High School and she was the first female president of her class there. She received her B.A. degree from Michigan State University in 1972. She completed her Master’s in social work from Michigan state university.

Debbie ran for public office in 1974 while still being a graduate student at Michigan State University. She won the election and became the third woman to be elected to the Ingham County Board of Commissioners. She served on the board from 1975 to 1978.

She became the first woman and the youngest person to date to chair the board of Commissioners in 1977 and 1978.

She ran for the U.S. House of representatives in 1996 against Dick Chrysler with an opportunity to represent Michigan’s 8th Congressional district. She defeated Chrysler and she was also re-elected in 1998.

Stabenow won the Democratic primary unopposed in 2000. She also won the general election against Spencer Abraham.

Debbie Stabenow passed a bill to ban oil and gas drilling in the Great Lakes. This bill helped in protecting the Great Lakes and Michigan communities to improve the quality of their water and restore wildlife.

She led efforts to pass $170 million for Flint to address critical health needs. She made efforts to make sure that people have affordable health care, which includes prescription drugs, mental health care, and addiction treatment.

Deborah Stabenow voted to increase taxes 150 times. She voted against reducing the marriage tax and doubling the per-child tax credit. She also voted to raise taxes on small businesses in Michigan. This led to lots of criticism from the citizens of Michigan.