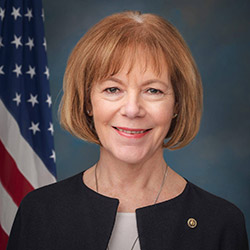 contact senator Tina Smith (D-MN)
Christine Elizabeth "Tina" Smith is an American politician and former businesswoman serving as the junior United States senator from Minnesota since 2018. She is a member of the Minnesota Democratic–Farmer–Labor Party, an affiliate of the Democratic Party.

Senator Tina Smith was born on March 4th, 1958 in New Mexico. She was raised in Santa Fe. She attended Manderfield and Acequia Elementary. She completed her high school in Northern California.

After high school, she went to Stanford and completed her Bachelor’s degree in Political Science from there. She went to the Tuck School of Business at Dartmouth College to complete her MBA degree.

After that, Senator Tina Smith moved to Minnesota for a marketing job at General Mills. Later on, she started her marketing firm and she dealt with businesses and non-profit organizations

Sen. Smith’s first interaction with politics was in the early 90s. She got involved in local politics by volunteering herself for DFL campaigns in Minneapolis. She managed the 1998 campaign of Ted Mondale for governor; the campaign was unsuccessful.

After the tragic death of U.S. Senator Paul Wellstone weeks before the 2002 election, Sen. Smith managed Walter Mondale’s campaign for the seat. Walter lost by a narrow margin to Norm Coleman. Tina left and started working as the vice president of external affairs at Planned Parenthood Minnesota

She left her job in 2006 and became chief of staff for Mayor R.T. Rybak. She was picked to manage his campaign in 2010. Despite the efforts, Margaret Anderson won the DFL endorsement. Smith started working for Mark Dayton, he won the DFL Primary in 2010.

Mark Dayton appointed Tina his chief of staff when he took office in 2011.

She became lieutenant governor on January 5th, 2015. She served as a lieutenant for 3 years until she got a chance to represent Minnesota in the U.S. Senate in 2018.

In 2018, Mark Dayton chose Sen. Smith to replace Se. Al Franken because of all the sexual harassment allegations against him. The democratic party needed a woman who could represent them in those times. She was officially sworn into the Senate on January 3rd, 2018

Tina Smith was one of the Democrats who blamed Trump for the riot at the Capitol and called for Trump’s immediate removal. Republican supporters felt that was not fair.

Some commentators criticized Tina Smith for being too liberal on tax and government spending.

Also Senator Smith’s previous work as a Vice President at Planned Parenthood may also be a source of criticism for anti-abortion thinkers.