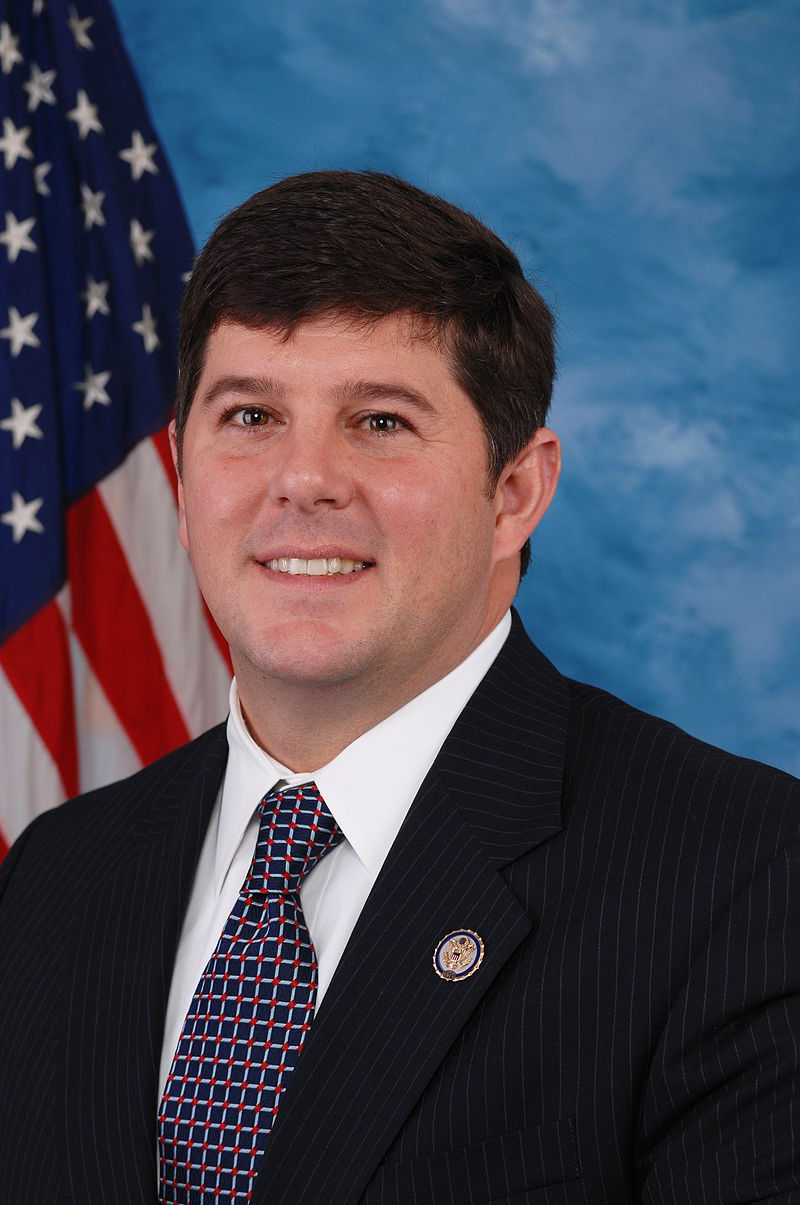 Congressman Steven M. Palazzo represents the 4th Congressional district of Mississippi and some of the finest people in the country. Like them, Steven believes in limited government, a strong national defense, and conservative solutions for our country.

Born in Gulfport, Mississippi, Steven attended St. John’s High School before earning his Bachelor’s and Master’s degrees in accounting from the University of Southern Mississippi.

Military service is a tradition in Steven’s family. His grandfather and uncle both served in the U.S. Marine Corps. Steven’s grandfather served with the 2nd Battalion 7th Marines in some of World War II’s most famous battles: Guadalcanal, Okinawa and Iwo Jima.

Honoring that tradition, Steven enlisted in the Marine Corps Reserves in 1988. His unit was mobilized and as a member of 3rd Force Reconnaissance, Steven celebrated Christmas of 1990 in the Middle East, while serving in the Persian Gulf War during Operations Desert Shield and Desert Storm.

After the September 11 terrorist attacks, Steven’s second deployment took him to Camp Shelby where he worked in direct support of the training and mobilization of troops deploying for Operation Enduring Freedom.

Today, Steven continues to serve in the Mississippi Army National Guard. He is the only Member of Congress out of 535 who is an enlisted Guardsmen. Although his educational background and life experience could qualify Steven to be commissioned as an officer in the Guard, he has chosen to remain a noncommissioned officer and infantryman.

Congressman Palazzo is also a former small business owner who started his own accounting firm in 2001, giving him a unique perspective on what it means to create jobs and manage a budget.

Dedicated to serving his community, Steven was first elected to the Mississippi state legislature in 2006. Steven used his background in business to push through a tax cut for Mississippians and authored a resolution reaffirming the 10th Amendment, which properly defines a limited role for the federal government by reserving power for the states.

Concerned by the direction our country, in 2010 Steven decided to run for Mississippi’s 4th Congressional District. It was a race no one thought he could win, but Steven Palazzo has never met a challenge he wasn’t willing to meet head-on. He won the election with 52% of the vote, defeating a Democrat who’d been in office for over 20 years.

Congressman Palazzo was first sworn into office on January 5, 2011 and initially served on the House Armed Services, Homeland Security, and Science, Space and Technology Committees where he was the Chairman of the Space Subcommittee.

In the 114th Congress, Steven was selected to the powerful Appropriations Committee which oversees all federal spending. He is a strong advocate of making sound federal investments to protect our national defense while cutting the true drivers of our deficits and debts: mandatory spending.

Steven is the proud father of three children: Barrett, Aubrey and Bennett.

Since coming to Congress I have been a constant advocate for our men and women in uniform, especially our law enforcement. Over the past few years we have seen communities torn apart by violence at the hands of anarrchists and misguided socialists. They have used opportunities for peaceful protest to loot and burn businesses and attack our police. These radical liberals must be met with overwhelming force, we will not allow our communities to be overtaken by liberal socialists dedicated to the destruction of law and order. In Congress I have allocated millions of dollars for local police forces through federal grants and have supported them through legislation to increase penalities and mandatory sentences for those who attack our law enforcement officers. I will always back the blue, to ensure they are always able to return to their families safe and sound after their shift has ended.

In the United States over 600,000 babies are killed every year by the barbaric act of abortion. Abortion is wrong, and protecting the rights of the unborn is one of the greatest responsibilities I have as a Member of Congress. I will never stop fighting for the lives of the unborn, and to end the practice of abortion once and for all. As the father of 3 children I believe all life is sacred and life begins at conception.

The scourge of illegal immigration is one of the biggest issues facing us today. Under President Trump, the “Remain in Mexico Policy” and the Construction of a Border Wall were working as a deterent to illegal entry into our country. Today we continue to recieve report after report of the millions of illegal immigrants who cross our borders annually and the dangerous drugs, weapons and gang activity that they bring with them. As a member of the Homeland Security Appropriations Subcommittee and the House American Security Task Force, I am dedicated to stopping illegal immigration and rooting out the evil that it brings. Border Security is National Security!

Many people in Mississippi are concerned over the rising cost of flood insurance. While most agree that these rates should be actuarially sound, the severe way in which FEMA is implementing these changes is negatively impacting our communities.

After more than a year’s work, the House & Senate was successful in passing legislation that restores grandfathered rates to properties and prevents FEMA from moving the goal posts on those who built back to code after Hurricane Katrina. The legislation also removes the home sale trigger that would drastically increase flood insurance premiums. In addition, the bill holds FEMA accountable to accurate and fair mapping, as well as requiring an affordability framework to be provided within 18 months after the affordability study is conducted. The President signed the measure in to law on Friday, March 21, 2014.

I am grateful to local leaders for their support and tireless work to bring awareness to Congress and FEMA on the importance of keeping flood insurance available and affordable not just for South Mississippians, but all flood insurance policy holders in the country.

We all owe a debt to the men and women who have served and given their lives in defense of liberty and freedom. The well-being and health of America’s servicemen and women is a top priority for me. As a member of the National Guard who has been deployed, I know first-hand that members and their families have made tremendous personal sacrifices to make the world a safer place.

I support our troops on the ground in Iraq and Afghanistan and around the world. It’s wrong to play politics with the troops, and we’ve all seen the consequences of these decisions paid out in American lives. It often seems that our fighting men and women are led by a Commander In Chief who is AWOL, “Absent, With Out Leadership.” The enemies of the United States have been presented with a view of our nation that makes us look mean-spirited. They have been told that we are a nation of bullies, wimps and cowards. They’ve heard these messages straight from our own Commander-In-Chief.

I will work to make sure our troops have the tools, equipment and supplies they need to do the mission and come home as soon as possible. This nation needs a strong national defense, but to keep it strong we need a robust economy. That means getting rid of sequestration, which does tremendous damage to our national security. We have been successful in replacing part of the sequester for the next several years, a big victory for our men and women in uniform.

I have also led the fight to keep shipbuilding at Ingalls strong. They continue to produce the best warships in the world, and continued funding is vital for jobs and our Mississippi economy. Finally, I will always advocate for our veterans. The House made significant progress in securing veterans’ health benefits over the past two years, but much more still needs to be done. A recently-passed budget cut retiree cost of living allowance increases, something I do not support. Congress should work to immediately fix and restore these pension changes for our retirees.

As a Certified Public Accountant, I know the importance of fiscal control. The dangerous cycle of spending without considering the cost and asking the American people to bear the burden through higher taxes cannot continue. It is time to stop the spending and reduce the dangerous national debt. As a small business owner who has created jobs, it’s clear to me that higher taxes, out of control spending and an outrageous national debt threaten our future. The government must stop spending money it doesn’t have. We can’t keep kicking the can down the road.

More and more of our limited resources are being spent on unlimited entitlement programs and reasonable cuts must become a reality. What has our nation become when 29 million Americans depend on the government for assistance to live their lives every day? We must cut back on the way we spend America’s money. I truly believe that Americans are willing to accept cuts if the sacrifice is truly shared and wasteful spending is eliminated.

Since I was first elected, House Republicans have cut the budget by more than $165 billion dollars. When Democrats were in control, they increased spending by $210 billion. So we’ve made significant progress. More must be done, especially to tackle entitlement spending – the true driver of our national debt and deficits.

Under this President, Mississippians are suffering. Everything costs more. From groceries to gas, we’re seeing our paychecks stretched to the limit and beyond. Making ends meet, finding good jobs and surviving this economic crisis are the top concerns of the people of my district.

Congress should be focused on an agenda that promotes economic growth for our nation. I have worked to encourage investment and job creation here in America and in Mississippi. I have targeted the forces that drive up the costs of health care, energy, food and more. Unfortunately, Congress and the President continue to ignore the crisis at hand and just keep kicking the problems down the road.

I will continue to press for legislation to tackle our biggest problems – health care reform, entitlement reform, gas price relief and more. House Republicans have passed over 150 jobs bills over the last three years that would jumpstart our economy, reduce red tape, and get Americans working again. These bills have died at the feet of Harry Reid and the Senate, but I will continue to fight for policies that help Mississippi families.

Hunting, fishing and wildlife conservation are an integral part of South Mississippi’s culture. Some of my greatest childhood memories are fishing and hunting with family and friends and I love to share those activities with my children. I proudly represent the thousand of sportsmen and women by working to strengthen and preserve this wonderful southern heritage and protect the Second Amendment.

But the Second Amendment is more than just hunting and fishing, it’s a part of our way of life. Any retreat or surrender of our liberties is a subversion of the Constitution and the principles established by the founders of our nation. Here are some of the ways I’m working to protect our way of life: