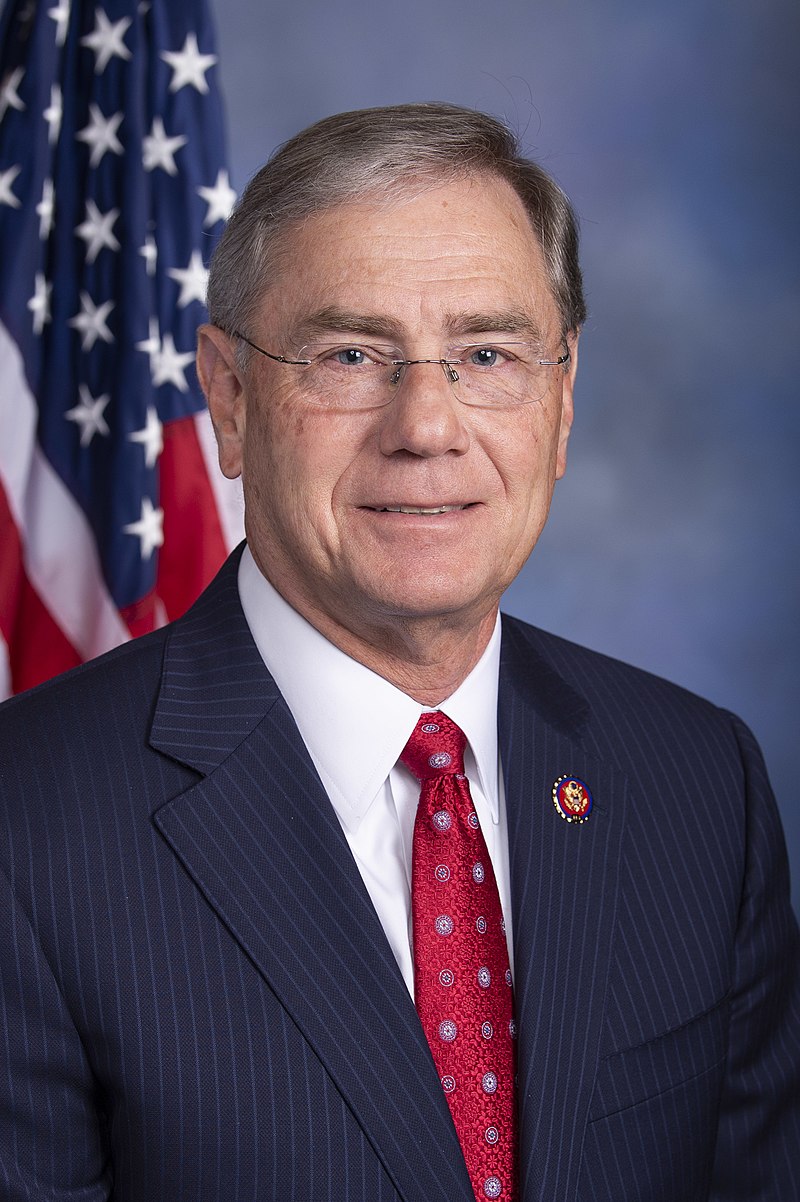 Contact Representative Blaine Luetkemeyer
As the Representative of the 3rd Congressional District of Missouri, Blaine is committed to representing the interests of hard-working people by being a strong voice for them in Congress.

A native of St. Elizabeth, Mo., in Miller County, Blaine Luetkemeyer, 67, is a lifelong resident of the district and knows what it takes to improve the economy and create jobs from his more than 30 years of experience as a small businessman. Luetkemeyer also has a strong background in agriculture including operating a 160-acre family farm and raising hogs and cattle to put himself through college. He is strongly pro-life, supports our Second Amendment rights, and believes in fiscal responsibility.

Luetkemeyer was first elected to the U.S. House of Representatives in 2008 and was re-elected in 2010, 2012, 2014, 2016, and 2018. Missouri Farm Bureau, Missouri Right to Life, the National Federation of Independent Business, and the National Rifle Association are just a few of the organizations that have endorsed Luetkemeyer for re-election in the past.

Touching on his wide-ranging experience in business, Luetkemeyer serves on the powerful House Financial Services Committee in Congress and is a member of the Small Business Committee. The Congressman serves as the Ranking Member of the Subcommittee on Financial Institutions and Consumer Credit.

His work to protect taxpayers’ hard-earned dollars in the 111th Congress earned Luetkemeyer the Taxpayer Hero Award from the Council for Citizens Against Government Waste, Tax Fighter Award from the National Tax Limitation Committee, and the Defender of Economic Freedom Award from the Club for Growth.

meet-blaine-img2From 1999 to 2005, Luetkemeyer was a Missouri State Representative and served as Chairman of the Financial Services Committee and was elected by his colleagues to serve as the House Republican Caucus Chairman. After leaving office, Luetkemeyer was appointed by Gov. Matt Blunt to serve as the Director of the Missouri Division of Tourism, where he used his business experience to market the state of Missouri.

Luetkemeyer is a member of the Knights of Columbus, Eldon Chamber of Commerce, Missouri Farm Bureau, National Rifle Association, and a lifelong member of St. Lawrence Catholic Church. Luetkemeyer is a graduate of Lincoln University in Jefferson City, Mo., where he earned a degree with distinction in political science and a minor in business administration.

Luetkemeyer and Jackie, his wife of 43 years, have three children, Trevor, Brandy and Nikki, and six grandchildren.

With 30 years of small business experience, Blaine knows what it takes to create jobs and turn our economy around. He’ll fight to keep taxes from going up, cut the government red tape that is strangling our economy, push for an all of the above energy plan to lessen our dependence on foreign oil, and support the opening of new markets for Missouri goods and services. Blaine also knows that our historic national debt is keeping the economy from expanding, so he’ll continue to push to rein in out of control government spending and to add a Balanced Budget Amendment to the United States Constitution.

Blaine was proud to support the Tax Cuts and Jobs Act, which eliminated Obamacare’s individual mandate. As a father and grandfather, Blaine is extremely concerned about the $16 trillion national debt that will be passed on to future generations. While the president keeps proposing trillion dollar deficits and the Senate has refused to act on a budget in more than 1,000 days, Blaine supported and voted for a Balanced Budget Amendment to the United States Constitution and a budget plan that gets us back to balance.

It is more important than ever that we work to free ourselves from our independence on energy sources from foreign nations, many of which openly oppose us. Blaine supports an all of the above energy plan to harness all of our own resources and capabilities, whether oil, coal, nuclear, biofuels, solar, or wind. We must drill for oil in Alaska, on federal lands, and off of our shores; we cannot afford to leave these resources untapped. He staunchly opposes cap and trade and has fought to rein in the out of control EPA, which has proposed numerous regulations that will drive up the cost of energy and will further damage our economy if allowed to go unchecked.

As the operator of a 160 acre family farm and somebody who raised hogs and cattle to put himself through college, Blaine has a deep understanding of agriculture, which is the largest sector of Missouri’s economy. In Congress, Blaine has been a leader on issues important to farmers, ranchers, and rural communities, including better management of the Missouri River; opening more markets for Missouri agricultural products; fighting against the EPA’s regulation of farm dust, streams, and ponds; leading the charge against a Department of Labor rule that would prevent young people from working on their neighbors’ farms; working to eliminate the Death Tax in its entirety; opposing cap and trade; and supporting disaster relief for livestock producers being devastated by current drought conditions. Blaine is proud to be endorsed by the Missouri Farm Bureau for re-election in 2016.

Blaine was proud to support the Tax Cuts and Jobs Act, which eliminated Obamacare’s individual mandate. Blaine strongly opposes Obamacare and is currently working to repeal it and de-fund it, because Obamacare destroys jobs, raids Medicare, raises taxes, tramples on religious freedom, and empowers the government rather than doctors and patients to make medical decisions among other reasons. Blaine believes doctors and patients – not government bureaucrats – should be in charge of health care decisions, and he supports common sense solutions to the high cost of health coverage like allowing small business to join together to have the same purchasing power for insurance as large corporations; enacting medical malpractice reform to stop frivolous lawsuits that drive up the cost of care; and fostering competition by allowing the sale of insurance across state lines.

As a father and grandfather, defending the unborn is a top priority for Blaine. As a state legislator, Blaine supported a ban on the barbaric practice of partial birth abortion and took on two Democrat governors in the process. In Congress, Blaine is a strong supporter of pro-life causes, supported legislation to cut off taxpayer funding for organizations that provide abortions, and introduced legislation to stop the Obama Administration from forcing organizations with moral or religious objections from being mandated to provide certain services that run contrary to their beliefs. Blaine has always received a 100% pro-life rating from Missouri Right to Life and is proud that Missouri Right to Life has endorsed him for re-election to the U.S. House of Representatives.

In these tumultuous times, it is important for our nation to be able to defend ourselves and protect our citizens. Our nation must be ever-vigilant, and we must ensure that our intelligence and military capabilities remain the best in the world. We must ensure our military has the tools to deal with threats to our national security, and we must make sure we offer the utmost support to our troops. Every day, the brave men and women in our armed forces risk their lives to protect the freedoms we hold dear, and we owe them a debt of gratitude.

Blaine is a staunch supporter of our Second Amendment rights. He has consistently earned top ratings and endorsements from the National Rifle Association and is also a member of the NRA. While serving as a State Representative in Missouri, Blaine was also a supporter of the ballot measure supported by the majority of Missourians that allows law-abiding citizens to carry weapons for protection against those that would threaten individuals and their families and has supported numerous bills important to sportsmen, hunters, gun owners, and enthusiasts.

Blaine has also been endorsed by the National Rifle Association.

As the Representative of the 3rd Congressional District of Missouri, Blaine is committed to representing the interests of hard-working people by being a strong voice for them in Congress.

Representing the 13 counties that make up the 3rd Congressional District of Missouri, Blaine is a native of St. Elizabeth, MO where his family has lived for four generations.

Along with his strong agriculture background, Blaine is a small businessman, having been in the banking and insurance industry for over 30 years. He also served as a bank regulator for the state of Missouri earlier in his career.

From 1999 to 2005, Blaine was elected to the Missouri State House of Representatives. During his time in the Legislature, he served as Chairman of the Financial Services Committee and was elected by his colleagues to be the House Republican Caucus Chairman. After leaving office, he was appointed by Gov. Matt Blunt to serve as the Director of the Missouri Division of Tourism.

In the 113th Congress, Blaine was ranked Missouri’s most effective lawmaker. The Legislative Effectiveness Project, run by professors at the University of Virginia and Vanderbilt University, measures how successful a given representative is at getting things done. The average score for members of Congress was 1.0. Blaine received a 2.344.

Blaine is a member of the Knights of Columbus, Eldon Chamber of Commerce, Missouri Farm Bureau, National Rifle Association and a lifelong member of St. Lawrence Catholic Church. He is a graduate of Lincoln University in Jefferson City, MO, where he earned a degree with distinction in political science and a minor in business administration.

Blaine and his wife, Jackie, have three children and six grandchildren.