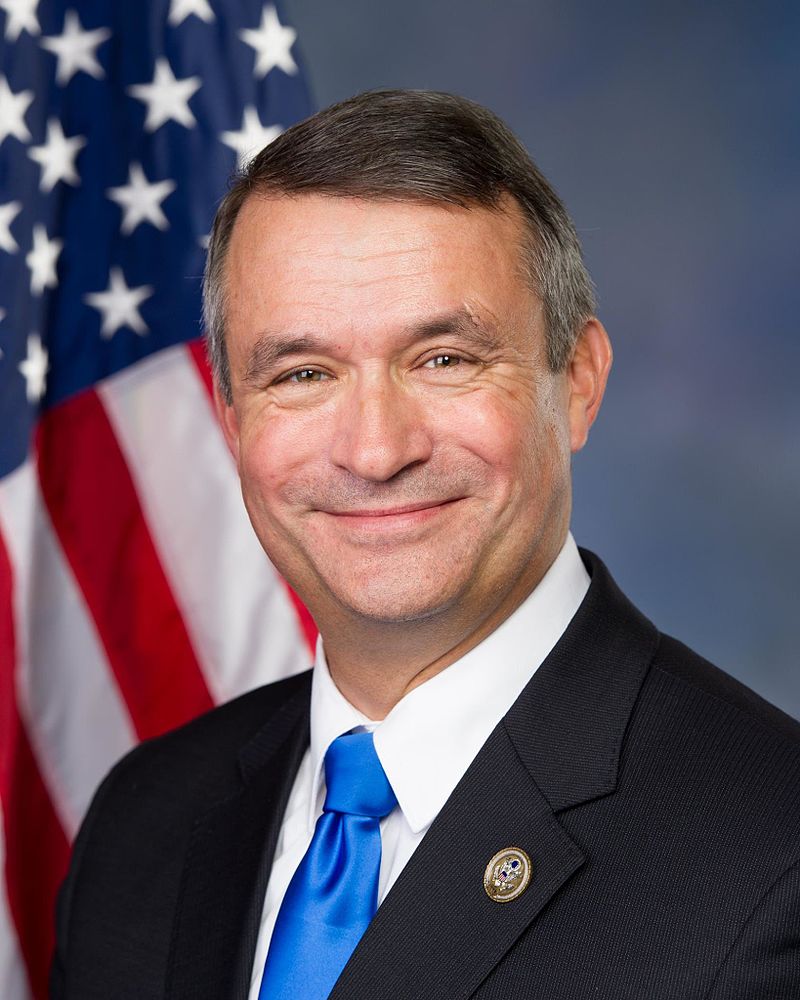 Contact Representative Don Bacon
Congressman Don Bacon learned first-hand how the value of hard work and commitment contributes to the success of a small business.

don and angie 1982 Raised on a farm in the Midwest, Don Bacon learned the value of hard work and the importance of our God-given freedoms. Don worked his way through college and graduated from Northern Illinois University with a Political Science Degree in 1984. He also married his college sweetheart, Angie, in 1984. He later earned Master’s Degrees from University of Phoenix and National War College.

Wanting to serve his country, Don joined the Air Force in 1985 and served for 29.5 years, retiring as a Brigadier General. He served in the intelligence, electronic warfare, reconnaissance, and public affairs career fields and had 16 assignments all over the world. He commanded twice at the wing level, to include at Ramstein Air Base in Germany and Offutt Air Force Base in Nebraska. He also commanded one group, one squadron, and one expeditionary squadron. He deployed four times during his career to the Middle East to include commanding an electronic warfare squadron during the invasion of Iraq and a year-long tour to Baghdad during the surge in 2007-2008.

officer training school 1985He won multiple awards during his time in the Air Force including the Air Force Distinguished Service Medal, two Legion of Merits, and two Bronze Stars. He was selected as Europe’s top Air Force Wing Commander (along with Angie as commander’s spouse) in 2009. He was a Distinguished Graduate in his Air and Command Staff College, Navigator School, and Intelligence School.

Don has also worked as a Congressional Military Advisor focusing on Offutt Air Force Base and Nebraska National Guard, and was an Assistant Professor at Bellevue University teaching Undergraduate Leadership courses and American Vision and Values (The Kirkpatrick Signature Series).

General Bacon may have retired the uniform, but he wasn’t ready to stop serving his country. He ran for Congress in Nebraska’s Second Congressional District in 2016 as a strong defender of the Constitution, conservative values, and national security. Don defeated the Democrat incumbent, becoming the only Republican challenger in America to do so in the 2016 elections. In 2018, once again with your help, Don overcame the “blue wave” and was re-elected to serve a second term in Congress. Finally, after running for his third term in 2020, Don was able to secure his largest margin of victory yet.

Don resides in Papillion with Angie, his wife of over 38 years. They have four children and six grandchildren.

The highest priority of the Federal Government is the strength and security of our nation. Through my work in Congress, I am committed to ensuring that America’s military remains the most skilled and capable force in the world. It is vital that we provide our Armed Forces with the necessary tools and resources to project strength and protect American interests abroad. As China, Russia and Iran continue to taunt the rest of the world, America must take a clear and decisive stand against their oppressive ideologies.

Our team helped secure $730 million over two years to replace and upgrade the 55th Wing and Offutt AFB aircraft, an important security measure for our nation. We also worked to secure funding to help rebuild Camp Ashland and Offutt AFB after the historic 2019 Nebraska floods. For five years in a row, I have been selected to serve on the conference committee for the National Defense Authorization Act (NDAA) in which we secured a 3.1% pay increase for military service members and restored pre-sequestration funding for the Department of Defense.

We must also prioritize funding and defending our safety and security here at home. I will always stand up for first responders who are doing their jobs well day in and day out. I oppose the radical ‘Defund the Police’ movement and oppose any calls to remove qualified immunity. I also support collective bargaining rights for public safety officials employed by federal, state and local governments.

I believe in an economy that works for all. Our economy should work to lift those in poverty into the middle class and increase the standard of living for all. This is accomplished through pro-growth, free-market principles. It is free-market principles, not centralized government planning, that drive economic growth, innovation and prosperity for every American, regardless of where you were born or to whom you were born. A rising tide lifts all boats.

In Congress, I have been a champion of economic growth and job creation by supporting the Tax Cuts and Jobs Act of 2017 (H.R. 1) and supporting the rollback of excessive red tape on American industry. I have also called on American industry to re-establish their headquarters in America to strengthen the supply chain for the United States. In 2020, I supported the CARES Act, saving millions of jobs and thousands of small businesses (H.R. 748).

We owe everything to those who wore the uniform protecting our nation. To those who paid the ultimate price, we can never repay them, but we are forever grateful for their sacrifice and service. As long as I am serving in Congress, one of my highest personal priorities will be representing and delivering for veterans.

With the help of my two predecessors, Representatives Lee Terry and Brad Ashford, we were able to pass the CHIP IN Act which resulted in the building of Omaha’s new VA Ambulatory Care Clinic. In 2021, I sponsored and Congress passed H.R. 3888 to renew the CHIP IN Act for another five years. I also sponsored the Gold Star Family Support and Installation Access Act of 2017 (H.R. 3897) and the Military Surviving Spouses Equality Act (H.R. 553).

Energy Independence and the Environment

Now more than ever, energy independence is critical to the national security of America and her democratic friends and allies. We can’t let misguided and radical leftist policies pave the way to a future in which America’s enemies can hold us hostage when it comes to energy.

Congress should work to balance smart environmental policy with energy independence. The solution to American energy independence requires a combination of wind, solar and nuclear energy as well as fossil fuels. During my time in Congress, I co-sponsored the Biodiesel Tax Extension Act of 2019 (H.R. 2089) and the Renewable Fuel Standard Integrity Act of 2019 (H.R. 3006). I also supported the reauthorization of ARPA-E to encourage research in cutting-edge renewable energy sources.

I support policies such as carbon capture and grid-scale energy storage but I do not support a carbon tax. In 2018 and 2020, I was honored to receive the American Wind Energy Association’s U.S. Wind Champion Award and served on the Climate Solutions Caucus in the 116th Congress.

As a member of the House Committee on Agriculture, I will continue to champion the interests of agriculture in Congress. Agriculture is the key to a healthy nation and the bedrock of the Nebraska economy. Over 90% of Nebraska’s total land area is home to a farm or ranch and one in four jobs in Nebraska are directly related to agriculture.

In 2018, I had the privilege of helping pass the five-year Farm Bill which added enhancements to trade initiatives for Nebraska farmers and ranchers and mandatory funding for livestock disease issues including the establishment of the Foot-and-Mouth Disease vaccine bank (H.R. 2). I also supported the passage of the United-States-Mexico-Canada Agreement (USMCA) to expand markets for Nebraska Ag products.

Border Security is national security. We must prioritize the security of our nation’s borders. This includes the use of physical barriers, increased personnel and the latest technology. A secure border is a safe America.

I also support finding a bipartisan solution for those currently in our country under the Deferred Action for Childhood Arrivals Program (DACA). I support a bipartisan pathway to legalization for DACA recipients while working to ensure that our border is secured once and for all.

One of the hardest challenges for the entire world in the last two years has been battling through the COVID-19 pandemic. From the early stages of the pandemic through now, I have worked to help protect your family and keep our businesses up and running. I sponsored the Healthcare Workforce Protection Act of 2019 to allow for the safe, mass production of masks (H.R.4982), supported the CARES Act of 2020, saving thousands of jobs and small businesses in Nebraska (H.R. 748) and sponsored the Flexibility for Localities and Eligibility Expansion Act to give local governments flexibility in the allocation of federal COVID-relief funding (H.R. 6652).

There exists no greater experiment of democracy in the history of the world than the United States of America. The ideals of the Declaration of Independence and the US Constitution — that each person is born with natural rights including life, liberty and the pursuit of happiness and that the government’s first and highest duty is to protect these rights, not infringe upon them — are among the most noble and righteous ever known.

As your Representative, I will always fight to defend the right to life. I co-sponsored legislation to make permanent the Hyde Amendment (H.R. 18) and co-sponsored the Pain-Capable Unborn Child Protection Act, prohibiting abortions on children 20 weeks and older (H.R. 1080). Through this advocacy and work in Congress, I have earned an “A” rating from Susan B. Anthony List, 100% rating from National Right to Life and Faith and Freedom Coalition, and the endorsement of the Nebraska Family Alliance.

I am a strong advocate for the cause of Labor in America. I believe that conservatives have a once in a lifetime opportunity to welcome Labor Unions back into the Republican Party. I have supported key legislation to create nearly 1 million registered apprenticeships (H.R. 447), provide collective bargaining rights for public safety officers (H.R. 3225), protect workers exercising their rights during the COVID-19 pandemic (H.R. 308), support qualified immunity for police officers, support the “two-man crew” legislation (H.R. 1748) and oppose legislation that would hinder our nation’s Postal Service (H.R. 47).

I was the only Nebraska Representative to receive the support or endorsement of 25 Labor Unions in 2020.

I will continue to work towards market-based options to bring down healthcare costs for working families. We can increase options and competition by encouraging associational pools and allowing insurance companies to compete across state lines. I support protecting coverage for those with pre-existing conditions, co-sponsoring the Pre-Existing Conditions Protection Act (H.R. 892). I will also continue to advocate for an end to surprise medical billing and lowering prescription drug costs (H.R. 19).