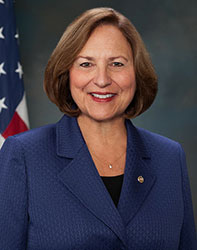 Know more about Senator Deb Fischer (R-NE)
Debra Lynelle Strobel Fischer is an American politician serving as the senior United States Senator from Nebraska since 2013. She was elected to the Senate in 2012 and reelected in 2018. Fischer served two terms in the Nebraska Legislature, representing a rural district in the Sandhills, from 2005 to 2013.

Senator Debra Strobel Fischer is an American politician. She has been serving as the senior U.S. Senator from Nebraska under the Republican since 2013. She was a member of the rural high school board of Education from 1990 to 2004. She also served two terms as a representative in the Nebraska Legislature.

Fischer was born on March 1, 1951, in Lincoln, Nebraska. She studied at Lincoln Southeast High school. She also attended the University of Nebraska but left school before her graduation. She got married and ran a cattle ranch with her husband. She eventually returned to the University of Nebraska and earned a Bachelor’s degree in Education in 1987.

Fischer started her career in electoral politics in 1990. Then, she was elected to the boards for Valentine Rural High School. She served till 2004. Before she was elected a senator, Fischer was a member of the Nebraska Unicameral, representing District 43, from 2005 to 2013. In 2012, Democratic incumbent Ben Nelson retired from the Senate. Subsequently, Fischer announced her intention to run for the seat. With the established survey of many outside rankings, Fischer is one of the safest votes for the Republican Party.

In the general election, Fischer defeated Democratic nominee Bob Kerrey. She assumed office in 2013 to become the state’s first female senator since 1954. She was re-elected in 2018.

Fischer is committed to defending the nations and strengthening national security. She has worked on reforms and laws against growing threats around the nation through effective defense policies. She also has direct oversight of the U.S. Strategic Command. Fischer is also a leading voice in promoting economic development in the state. She continues to lead the charge on expanding and improving transport networks in the state. One of her top priorities remains the transport and telecommunications sectors.

Apart from being a senator, Fischer is a cattle rancher with over 40 years of experience. She is also a member of the Senate Agriculture Committee. Her administration also boasts of agricultural development. She has worked to open up new trading opportunities for farmers. She has also worked to cut off unnecessary regulations affecting farmers.

Senator Deb Fischer Criticisms Senator Fischer got under fire for suing her neighbor over their land. According to an ad launched by Bob Kerrey, he accused Fischer of attempted land grabbing. He also added that the couple spent about $40,000 in legal fees to defend their land from Fischer. Fischer was also criticized for leasing her family’s ranch below market price. She leased the land for $110,000 per year, which is less than the market rate on private lands. But, she argued that the poor quality of the land makes it inappropriate to lease out at a normal rate.

According to OpenSecrets, Senator Fischer’s net worth is estimated to be $2.8 million.

Senator Fischer is an avid politician with many legislative achievements in the service of her people. She has worked to promote common sense legislatures that will promote the lives of families and communities in Nebraska.

But, Fischer was criticized for leasing her family’s ranching land below market price. She also got under fire for benefitting from a federal program as a Senator.