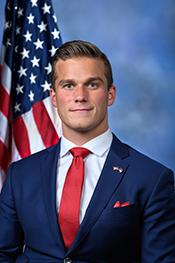 Contact Representative Madison Cawthorn
Congressman Cawthorn has rocked the status quo in Washington, D.C. following his election to Congress in 2020.

Congressman Cawthorn has rocked the status quo in Washington, D.C. following his election to Congress in 2020. The left-wing media has launched every false attack and smear campaign imaginable to block Congressman Cawthorn’s status as a rising star in the Republican Party. He is the youngest Republican to ever be elected to the United States Congress, and currently the youngest member of Congress.

Congressman Cawthorn has emerged as one of President Trump’s strongest and most ardent defenders in the Unites States Congress. The fake news media has labeled him “Trump 2.0” and consistently derided him for his support of the President’s agenda. He is a fervent Christian and constitutional Conservative.

Congressman Cawthorn serves on the House Education and Labor Committee and the House Veterans Affairs Committee. He is a member of the House Freedom Caucus, the Republican Study Committee, and the vice-chairman of the Freedom from Big Tech Caucus.