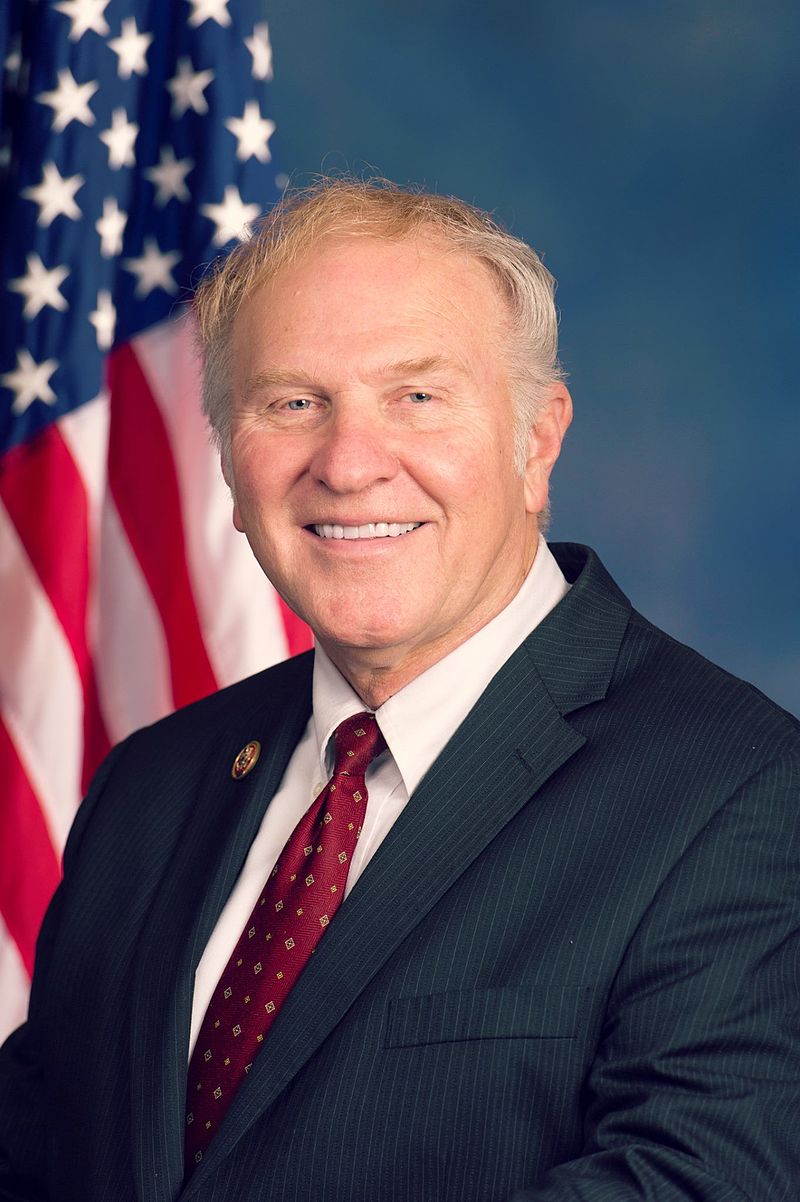 Congressman Steve Chabot is proudly serving Ohio’s First Congressional District in his 12th term. A lifelong Cincinnatian, Steve previously served as a Cincinnati City Councilman and Hamilton County Commissioner for nearly 5 years in each position prior to his election to Congress in 1994.

Teacher Steve Steve is one of Congress’ leading advocates for fiscal responsibility, voting consistently to eliminate wasteful spending and reduce the excessive tax burden on hard-working Americans. Nonpartisan taxpayer advocacy groups such as Citizens Against Government Waste, the Concord Coalition and the National Taxpayers Union have time and again rated Steve as one of the most pro-taxpayer Members of Congress. The National Journal recently credited Steve as having the most conservative voting record in the U.S. House of Representatives during the last term of Congress.

As Congressman, Steve served as one of 12 House Managers during the Senate impeachment trial of President Bill Clinton in January 1999. Steve received praise for his even-handed and thoughtful approach to the trial. Steve has also led efforts to pass product liability reform measures and toughen anti-drug laws. He is nationally recognized as an advocate for the rights of the unborn. Most importantly, Steve authored the ban on the practice of partial-birth abortion which is now the law of the land.

Chabot Young Family Trailer Steve is a 1971 graduate of LaSalle High School. He went on to earn his undergraduate degree from the College of William and Mary. He returned to Cincinnati to teach at St. Joseph’s School in the West End and enrolled at Northern Kentucky University’s Salmon P. Chase College of Law in the evening, where he earned his law degree. Steve has been active in our community. He taught political science at the University of Cincinnati and chaired the Boy Scouts of Cincinnati.

Steve and his wife Donna live in the Cincinnati neighborhood of Westwood. The Chabots have two adult children, and two grandchildren.

After years of stagnant economic growth, Congress and the Trump Administration have pursued a pro-growth economic agenda – cutting regulations, reducing taxes, and letting American families keep more of their hard-earned money. As a result, our economy has come roaring back. Unemployment is the lowest it’s been in nearly 20 years, and the GDP grew an impressive 4.1 percent during the second quarter of 2018.

While this is great news, there are still steps we can take to encourage more economic growth and expansion. Over the years, I’ve talked to small business owners and entrepreneurs all across the country and right here in the First District. And the thing I hear more than anything else is the difficulty they face when dealing with burdensome regulations. Small businesses don’t have the resources that large corporations have to hire the attorneys and accountants necessary to comply with the regulatory burden they face every day.

That’s why I’ve championed legislation to make federal agencies look for alternatives that will ease the burden on small businesses, and let them get back to what they do best, growing their businesses and creating jobs.

The American people deserve better than Obamacare. Costs continue to skyrocket and far too many people are unable to purchase coverage for their families.That’s why I support repealing the massive healthcare power-grab by the federal government and replacing it with market-based reforms that will give American families more options at a lower cost.

America must move towards energy independence in a manner that does not threaten the environment, or kill job creation. I believe we need to consider all available options including wind, solar, bio, nuclear and drilling right here at home. As part of that effort, I think we need to increase domestic oil production. That’s why I have been a strong proponent for the Keystone XL pipeline that will bring thousands of barrels of oil to the U.S. each day, not to mention, create thousands of American jobs – some of which will be created right here in Cincinnati at our Siemens plant.

To help lower gas prices at the pump, I have introduced legislation to stop price-gouging and anti-competitive behavior by OPEC nations. When we first introduced this legislation more than a decade ago, gas prices were climbing toward $3 a gallon, and would eventually peak at over $4 a gallon in 2008. In recent years, we have done a good job reducing our dependence on foreign sources of oil, by increasing domestic production. Consequently, we have had much lower gas prices. However, we are still subject to fluctuations in the global market. The lower prices have angered oil cartels around the world, and now OPEC is ramping up its price-gouging efforts once again.

My legislation would significantly help to fight price-gouging by subjecting OPEC nations to antitrust laws, and prohibiting them from unilaterally withholding supply with the intent of creating a shortage or raising prices. We managed to pass this important legislation in the House a few years back, but now we must finish the job and get this bipartisan legislation to President Trump’s desk for his signature.

I believe the federal government should be required to operate in a fiscally responsible manner, just as most American families and small businesses do. The money being spent by the government is your money. That’s why I have been a consistent advocate for a balanced budget amendment to our Constitution. We are currently facing a national debt that exceeds $21 trillion! That’s more than $174,000 of debt per taxpayer. This is unacceptable. It’s time that Washington makes the tough decisions to stop wasteful government spending.

Personally, I am committed to continue my fight against wasteful spending in Congress. And I am proud to have been rated time and again as one of the most taxpayer friendly and fiscally responsible members of Congress by non-partisan taxpayer advocacy groups like Citizens Against Government Waste and the National Taxpayers Union.

Social Security represents a sacred contract with older Americans that should never be broken. The American people have paid into that system their entire lives, and they deserve to know it will be there for them when they need it.

That’s why I have been a longtime supporter of the Social Security Preservation Act, which says that the money paid into Social Security can only be used to pay for Social Security. It cannot be spent on other government programs. Simply put, Social Security provides critical benefits to more than 60 million Americans, and I firmly believe that these benefits must be protected.

We can never do enough to repay the sacrifices made by the brave men and women who served in our nation’s armed forces. As a grateful nation, we must do everything in our power to ensure that these men and women are receiving the care and resources they need. I will always be a strong supporter of legislation and funding efforts that would ensure veterans access to medical care, education and financial services.

Our nation’s schools have become soft targets for any would-be killer with a gun. We have to do a better job of protecting both students and faculty from these increasingly frequent threats. Shortly after the shooting in Parkland, Florida, Cincinnati FOP President Dan Hils approached me with a common-sense proposal to bolster school security and help keep our children safe.

I took Dan’s suggestions and went to work with my colleagues to produce legislation that gives schools and law enforcement the tools they need to make our schools safer and more secure. Our legislation, which was signed into law earlier this year by President Trump, reauthorizes the COPS Secure Our Schools grant program for ten years and more than doubles the funding available for important security measures, including metal detectors, improvements in identifying and treating mental health issues, the installation of improved communications systems that allow for better communication between law enforcement and schools and easier reporting of potential threats, and security training for school employees and students.

The legislation we passed represents a huge step in the right direction, and it will go a long way to help prevent violence in our schools.

Foreign cyberattacks are becoming an increasingly dangerous threat, both to our government as well as to the private sector. As we saw firsthand during the 2016 election season, Vladimir Putin and his Russian cohorts are doing everything they can to interfere with Western democratic nations, to undermine our political systems as much as possible in order to cause chaos in every way imaginable. And that is something that should worry every American – Republican, Democrat or independent.

There are real concerns that Russia and other bad actors around the globe might try to interfere with this year’s elections, as they did in 2016. And so we need to be vigilant to make sure that any efforts to interfere with our elections at all are thwarted.

Congress has provided states with $380 million dollars to take the necessary steps to ensure that the proper cybersecurity defenses are in place to prevent any efforts to hack state and local elections. That’s the most money provided to safeguard election equipment in 16 years, when we provided money to help upgrade and modernize voting systems in 2002. We have also appropriated another $300 million to the FBI to help combat Russian cyberattacks.

At the same time, we also need to help private businesses and the American people fend off cyberattacks. On the House Small Business Committee, I have focused on steps small businesses can take to prevent and combat cyberattacks. We have held numerous hearings on cybersecurity, and Ranking Member Nydia Velasquez and I introduced bipartisan legislation (H.R. 4668, the Small Business Advanced Cybersecurity Enhancements Act) to help give small businesses the tools and resources they need to defend themselves against cyberattacks, both foreign and domestic.