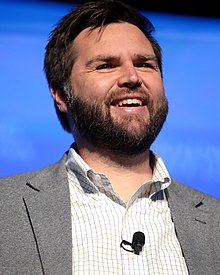 contact senator James David Vance (R-OH)
JD Vance is a United States Senator for the great state of Ohio. He was elected to the U.S. Senate in 2022 and sworn into office on January 3rd, 2023.

JD Vance is a United States Senator for the great state of Ohio. He was elected to the U.S. Senate in 2022 and sworn into office on January 3rd, 2023.

JD was born and raised in Middletown, Ohio, a once flourishing American manufacturing town where Ohioans could live content, middle-class lives on single incomes. Over time, many of those good jobs disappeared, and JD’s family suffered the effects along with many others.

Turbulence was common at home and at school. His grandmother, called Mamaw, was his saving grace. Her tough love and discipline kept him on the straight and narrow. A “blue dog” Democrat, she owned 19 handguns and nurtured a deep Christian faith in herself and her family. She died in 2005, shortly after JD enlisted in the United States Marine Corps.

JD went on to serve our nation in the Iraq War, then graduated from The Ohio State University and Yale Law School. He wrote a bestselling book, Hillbilly Elegy, which was turned into a Netflix movie. He also started a business dedicated to growing jobs and opportunity in the American heartland.

JD believes Ohioans deserve better. And he aims to fight for it in the U.S. Senate.

American Decline Was a Choice

My hometown of Middletown, Ohio is full of great people, and it has one of the highest citizenship rates in the country—nearly every person who lives there is a US citizen. Yet it has a poverty rate 15 percent higher than the national average. In many of our biggest cities, even right here in Ohio, drive around and you’ll see homeless encampments and trash strewn everywhere. Crime has skyrocketed, and even many successful families find it harder to get ahead. Every day, we read about a new assault on our country: from the Chinese who are stealing from American industry, or from our own “leaders” who teach our kids to hate their own country. Why is this happening? For a simple reason: our leaders have failed.

They chose to flood our country with criminals and drugs. They chose to take a knee as radicals ransacked our cities and made our communities less safe. They chose to make a quick buck by selling our industrial base to China. They chose censorship over the First Amendment.

Our parents and grandparents gave us the most prosperous nation in the world, and our leaders have chosen decline and plunder. But under our Constitution, We the People have the power, and it’s time we used it to fight back.

The Biden administration has spent billions and billions of dollars on things we don’t need. Why do we need a “transportation equity” agency to ensure that we don’t have too many male truck drivers? Why are we spending billions on battery technologies that are controlled by the Chinese Communist Party and built by Chinese workers? The result of needless spending is runaway inflation, which has made it harder for normal Americans to afford basic necessities. Inflation has hit our seniors especially hard, many of whom live on a fixed income. It’s time to get this inflation under control.

Ohio is one of the world’s top producers of natural gas and oil. It’s time for our nation’s leaders to recognize and implement policies that properly support the ample natural energy we can harness and produce right here at home. There is no reason for us to be buying foreign oil at insane prices and continue straining families financially just to fill up their tanks. We need common-sense energy policies that put the American consumer first, so that our country can become energy independent.

Our country used to value working class jobs, and then the manufacturing base of our economy was shipped overseas. Working class Ohioans were left in the dust. Job loss devastated families. Communities were forgotten. I’ll fight against the corporate elites who want to continue the status quo that plunders the millions who are unable to use their hands to earn a decent wage.

Over the last four years, President Trump scrapped terrible trade deals and renegotiated them, imposing punitive tariffs on companies that manufacture in China and other nations. These were the right policies, and the effort to rebuild our industrial base is only beginning.

Unchecked, illegal immigrants are entering our country at record rates. Joe Biden’s do-nothing policies give millions of aliens a free pass to break our laws, traffic drugs into our communities, contribute to rising crime and take jobs away from hardworking Americans. Biden’s policies have created a crisis out of thin air, after four years of President Trump’s successful efforts to get our border under control. As Ohio’s next senator, I will oppose every attempt by the Democrats to grant amnesty, so that our communities are safe places to live and work and raise a family. I’ll also work to finish construction of a border wall, and double the number of border agents in our country. Border security is not rocket science—we simply need the political will and the resources to do it.

We also must reform our legal immigration system. In no other developed country do we allow migration primarily based on family relations rather than skills. Millions of people want to come here, and we should only allow them if they contribute something meaningful to our country. Importantly, our ability to assimilate immigrants successfully—something our country should be proud of—is contingent on American leadership that loves this country. Forty years ago, new American immigrants came to a country where bipartisan leaders delivered a simple message: this great country is now your own, and you have a duty to help build it. Today, those same leaders deliver a different message: this is an evil and racist country, and you owe nothing to it. Because of this, our capacity to assimilate the next generation of immigrants is limited, and our legal immigration system should account for this fact by changing who we let in and reducing the total numbers.

Opioid addiction has devastated my family and my community. More and more Ohioans are falling victim to addiction, which means an entire generation of children orphaned, and another generation of grandparents forced to step up for our community’s kids. Communities are on the decline as job loss and poverty further engulf them. I’ll work to tackle the drug epidemic, eliminate the drugs coming into our community, and help those devastated by addiction. America is a country of second chances, and I’m proud to say that people in my own family have struggled with addiction for a decade before coming out on the other side of it. We need to ensure more second chances for Ohioans from all walks of life.

I know the technology industry well. I’ve worked in it and invested in it, and I’m sick of politicians who talk big about Big Tech but do nothing about it. The tech industry promised all of us better lives and faster communication; instead, it steals our private information, sells it to the Chinese, and then censors conservatives and others for daring to have a controversial opinion.

The solution is simple: we need to break up the big tech companies, to reduce their power in our economy and our politics. We also need to ban the theft of our personal information. If they want our data, it’s time they paid for it.

For two decades, global elites have played a trick on normal Americans: send your sons and daughters to die for nation-building wars in some far flung corner of the world, and when their utopian fantasies fail, accept millions of refugees into middle and working class neighborhoods. This is a bad deal for Americans, a bad deal for our troops, a bad deal for the refugees, but a good deal for the elites who profit from endless war.

Now more than ever, our economy favors foreign companies that vocally oppose American values. Why do Apple and Coca Cola feel the need to threaten states that pass election integrity measures? And why does our economic policy reward them more than local businesses? Our family-owned, American-made businesses are doomed if this trend continues. Did you know that Google, a massive technology company that actively works with the Chinese Communist Party pays a lower tax rate than many Ohio manufacturers who struggle desperately to never do business with the Chinese? At the same time, some of our biggest companies funded Black Lives Matter riots that destroyed our towns and cities. I’m done with an economy that favors anti-American multinationals over pro-American local businesses.

My fellow Republicans love to talk about tax cuts. By all means, let’s cut the taxes of the companies that invest in our country. But we’re going to raise taxes on companies that ship jobs overseas and use their money to fund anti-American radical movements. If these companies are going to wage war on America, it’s time America wages war on them.

I am 100 percent pro-life, and believe that abortion has turned our society into a place where we see children as an inconvenience to be thrown away rather than a blessing to be nurtured. Eliminating abortion is first and foremost about protecting the unborn, but it’s also about making our society more pro-child and pro-family. The historic Dobbs decision puts this new era of society into motion, one that prioritizes family and the sanctity of all life. The pro-life fight continues by ensuring that every young mother has the resources to bring new life into the world, expanding adoption and promoting pregnancy centers, so that every child grows up in a loving home, as they deserve. We’ll expand child tax credits and ensure that young parents don’t come home from the hospital with budget-busting surprise bills.

Joe Biden and anti-democracy multinational companies are trying to find new ways to take guns away from law-abiding citizens. They’re making it harder to buy firearms and ammunition and imposing new, unconstitutional regulations on American citizens. I will fight the gun grabbers, whether they’re federal bureaucrats enacting regulations or multinational companies punishing people for exercising their rights. When a payments processor attempts to restrict Americans from buying firearms or ammunition, I’ll push back with federal legislation.

Ohio has great elections, and we should all be grateful for that. But even in August 2022, we saw multiple states hold primaries where they hadn’t counted ballots nearly a week after the elections. This is unacceptable even in the world’s oldest Republic. It’s time to end the COVID-era changes to our elections–we need to go back to having an election day in this country, not an election season, and we need other common-sense measures too: Voter ID, signature verification on absentee ballots, and an end to mass mail-in voting. Taking steps like these will ensure that we conduct our elections with integrity in the future.

As we saw from the radical Left’s culture war waged during COVID-19 and the continued CRT indoctrination in our kids’ schools, it’s clear that we should never let politics drive public health decisions and deprive our kids of a good education. Luckily, Ohio appears to have moved past this, but there are still those who propose to mask 3-year-olds at preschools and shut down in-person learning. We can’t go back.