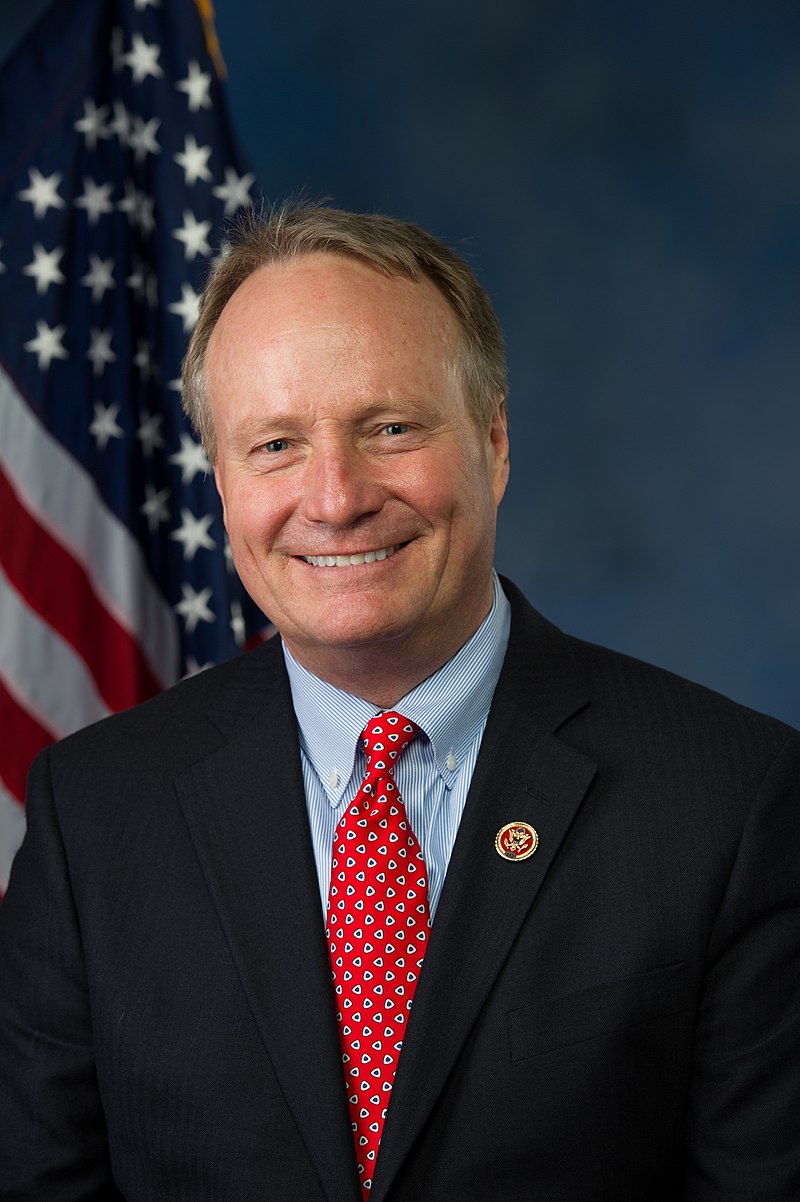 Contact Representative David P. Joyce
David Patrick Joyce is an American politician and former prosecutor who has served as the United States Representative for Ohio's 14th congressional district since 2013. An attorney, Joyce was previously the prosecutor of Geauga County, Ohio. He is a member of the Republican Party.

A lifelong resident of Northeast Ohio, Dave Joyce has spent most of his life protecting his community. Dave spent more than 25 years as the prosecuting attorney of Geauga County helping to make the county one of the best places to raise a family.

As a father and husband, Dave understands that decisions made in Washington have an immediate impact on families, and shape the world we will leave to our children. Dave’s formative years were molded by watching his dad who instilled in Dave the importance of family and hard work. Using the GI Bill, his father, a WWII veteran and recipient of a purple heart, went to John Carroll and worked his way up from the shop floor to running his own business.

Since taking the oath of office as a Member of Congress in 2012, Dave has tried to bring “Geauga County Common Sense” to our nation’s capital. However, that hasn’t always been easy in the face of entrenched bureaucrats.

Dave has time and again stood in the public arena as a voice for our Great Lakes. Dave has reached across the aisle to work with Republicans and Democrats to ensure the greatest environmental and economic treasure in our region has the resources its need to be viable today and in the future. His Great Lakes Restoration Initiative Legislation was folded into the Water Resources Development Act and signed into law by President Obama.

Dave has been a strong advocate in the fight against the opioid epidemic. As a former prosecutor, Dave saw firsthand what this epidemic is doing to our communities. He is working to convince Congress and the Administration, to treat this epidemic as the national emergency it is.

He is also a leading voice for rebuilding our military and economic policies and regulatory reforms that target job growth.

One of the primary principles Dave and his wife Kelly live by is a balanced budget. Together they discuss and distribute finances according to what is needed and never use more than what they currently have. Dave has brought this principle to Congress, proudly returning $100,000 of his office budget back to the U.S. Treasury. He knows it is only a small portion of the budget and deficit but he knows to achieve a balanced budget he must first lead by example in his own office.

Dave Joyce is a representative for the 14th Congressional District of Ohio, and together like you, he is proud to call Northeast Ohio his home.

I have always believed in a commonsense approach to government that helps both employers and their workers succeed. As a member of the Buy American Caucus, I remain committed to fighting for policies in Congress that provide more opportunities for Ohio small businesses and ensure they can compete in our increasingly global economy.

Ohio has long been a national leader in innovation and manufacturing, both of which will be the key to rebuilding our economy. As we work to recover from the COVID-19 pandemic, my focus remains on reducing inflation by supporting fiscally responsible policies, cutting red tape, spurring economic growth, creating good-paying jobs, and supporting jobs-training programs to give workers career-ready skills for the jobs of today and those that will exist in the future.

As a parent to three now-grown children, I can attest to how important high-quality education is as our children prepare for successful, meaningful futures. I also know that maintaining the highest standards of American education is vital to our nation’s competitiveness on the global stage. That’s why I work to ensure that schools and parents have every opportunity to identify solutions that work best for students.

The federal government must provide the funding and flexibility needed for schools, teachers, and parents to create an effective learning environment for students. However, the federal government should not involve itself in local school district decisions or overrule the role that parents play in their children’s education. It’s an honor to represent a district filled with school communities that are committed to providing students with the education they need to thrive and reach their goals. I will continue to advance policies that give every child the opportunity to realize their full potential.

In today’s world, energy independence is a matter of national security. It’s more important than ever to ensure America’s energy needs can be met by domestic production, not by a reliance on foreign countries such as Russia. That’s why I am proud to support an all-of-the-above energy strategy that will secure America’s energy independence and increase access to affordable energy for Ohioans.

Thankfully, Ohio’s natural gas and oil industry has been leading on clean, safe and reliable energy production for years. Between 2005 and 2015 Ohio’s power sector had the biggest carbon emissions reduction of any state in the country, contributing to America’s largest reduction of emissions in the history of conventional energy over the past decade. All of that was accomplished while, on average, lowering energy costs for American households and utilizing American energy like natural gas.

But for every ton of carbon dioxide emissions reduced here in the U.S., China increased its emissions by FOUR tons. The reality is that drastic environmental protection measures that kill American jobs and hike up prices will not have a positive impact on the Earth’s future sustainability if global emissions continue to rise because of actions from foreign powers like China (whose annual emissions are more than the U.S., Europe, and Japan combined).

Having grown up on the shores of Lake Erie, I consider it an honor to advocate for the Great Lakes in Congress. The Lakes are an irreplaceable resource and invaluable economic driver. They constitute the largest system of surface freshwater on Earth, provide drinking water for an estimated 48 million people, and generate more than 1.5 million jobs and $60 billion in wages annually.

As the Ranking Member of the House Appropriations Committee’s Subcommittee on Interior, Environment, and Related Agencies, and as a Co-Chair of the House Great Lakes Task Force, I will continue working across the aisle to secure the necessary investments to treat the Great Lakes as the national treasure they are.

Every American, regardless of age or whether they have a pre-existing condition, should have access to quality, affordable healthcare. As the proud husband of a nurse, I know that any reform of our healthcare system must ensure that Americans have the freedom and flexibility to choose the care that meets their individual needs at an affordable cost. I firmly believe the best way to achieve that is to provide Americans with a patient-centered healthcare system in which patients and doctors can make decisions without interference from the federal government.

Rest assured, I will continue fighting until Ohioans have affordable and accessible health care of their own choosing, not the federal government’s.

One of my priorities as a lawmaker has always been and will continue to be fixing our broken immigration system. America is a nation of immigrants, but we are also a nation of laws. Those two things don’t have to contradict each other.

Immigration reform is a tough and complex issue – but having been to the southern border to assess the growing crisis there myself, I know Congress must overcome party lines and take action. With illegal immigration at a record high, Republicans and Democrats need to work together to come up with solutions that will increase border security, combat the flow of lethal drugs into our country, and fix our broken immigration system.

In my role on the House Appropriations Committee, I remain committed to advancing commonsense policies to update and improve Ohio’s infrastructure. I firmly believe Congress can make meaningful investments without burdening families or small businesses with unprecedented taxation or increasing deficit spending and further contributing to our soaring national debt. In order to ensure the long-term sustainability of these investments, Congress must address the pending insolvency of the Highway Trust Fund. Responsible spending practices are critical to protecting the programs which improve roads, bridges, broadband, and other critical infrastructure assets that Ohioans rely on.

One of the most important functions of the federal government is to provide for the defense of this great nation. I’m proud to have consistently voted to provide our Armed Forces with the resources and tools they need to effectively confront emerging threats across the globe from Afghanistan to the South China Sea.

The United States has the strongest and most effective fighting force in the world and, as a member of the House Appropriations Committee, I work to ensure it stays that way by providing the funding necessary to safeguard our nation’s military readiness, protect American interests around the globe, support our troops at home and abroad, and care for our military families.

Tragically, the opioid epidemic has impacted nearly community across Northeast Ohio and the country as a whole. Roughly 400,000 Americans died from an opioid overdose between 1999 and 2017. That’s three times the number of American servicemembers who died fighting in World War I and seven times the number who died during the Vietnam War.

As a former prosecutor and as the Vice Chair of the House Addiction, Treatment and Recovery Caucus, I know that in order to successfully battle the opioid crisis, we need an all-of-the-above approach that includes that includes prevention and education efforts, promotes treatment, cracks down on illegal distribution, and enhances resources for first responders and law enforcement.

With Ohio being among the top five states with the highest rates of opioid-related overdose deaths, I remain committed to providing our local communities with the tools and resources they to save lives on the front lines of this crisis.

As a former prosecutor, the safety and wellbeing of Northeast Ohio’s communities remain one of my top priorities.

I’m proud to have co-founded the Bipartisan Task Force to End Sexual Violence in the 115th Congress and am a staunch supporter of our first responders and law enforcement officers. Our brave men and women in blue selflessly serve our communities with courage, dedication, and strength. Having worked alongside many of these heroes during my time as Geauga County Prosecutor, I know all too well the danger they willingly face each and every day to protect us and our families.

As the son of a World War II veteran, I know full-well that after asking our servicemembers to risk their lives to protect our country, we have the responsibility to ensure they have what they need to live healthy, happy and successful lives when they return home. I have been fighting to fulfill that responsibility ever since the people of Northeast Ohio sent me to Washington to represent them.

Through the House Appropriations Committee, it is my honor to ensure the U.S. Department of Veterans Affairs (VA) receives the funding it needs to provide support and assistance to our nation’s veterans and their families. I continue to focus on increasing transparency at the VA, improving veteran mental health care services and reducing veteran suicides, combatting veteran homelessness, and connecting veterans with the resources they need.

Each time I walk into my Washington, D.C. office, I see my father’s Purple Heart. I keep it there as a reminder that the freedom and rights we enjoy every day are not free. They are paid for by the service and sacrifice of the courageous soldiers of our Armed Forces. We are forever indebted to the brave men and women who have sacrificed so much to defend our nation, and I will forever remain committed to fighting for them.