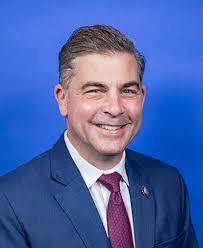 Born in 1971, Mike was raised in rural Ohio. On the family farm, he was instilled with values that continue to guide him today – hard work, community, and freedom. After high school, he followed his family tradition of service by earning a ROTC scholarship, attending the Marion Military Institute, and serving as an officer in the military. During this time, he also earned his bachelor’s degree from the Ohio State University.

As a professional, Mike became an executive for one of the nation’s largest privately owned energy companies, headquartered in Ohio. For more than 20 years, he fought to protect American jobs by fighting back against the same failed energy policies being pushed today by the Democrats. As an advocate for coal miners and American energy independence, he also worked to save miner’s pension benefits and reverse overreaching government regulations while valuing the environment.

Today Mike is using his experience to fight back against the radical Biden-Pelosi agenda in Congress and is working hard to help Republicans take back the House in November.

Mike will help rebuild the greatest economy of our lives by bringing back the policies that made it possible – lowering taxes, cutting red tape, demanding fair trade deals, and investing in our military, police, and first responders. He’ll stop reckless Democrat spending that is bankrupting our children with runaway inflation and mountains of new debt. He’ll hold the Biden Administration accountable for the humanitarian crisis at our southern border, foreign policy debacles, and crime crisis sweeping the nation. Above all, Mike will always defend our God given rights and the Constitution.

Mike is a man of faith and family. A father of three, he resides in Columbus with his wife Meghan and their two young sons. His oldest son is a senior at The Ohio State University.

This nation was founded on freedom and the belief that all men and women are created equal. We should not be teaching our children to hate America or to oppose one another based on race or gender. We may not be perfect, but our history proves that we are the greatest nation on the planet.

Parents must have a stake in their children’s education and should never be labeled as “domestic terrorists” for voicing their concerns about what is being taught in our schools. Unfortunately, the Biden Administration wants to keep parents’ voices out of the classroom. That is unacceptable.

Mike is standing up for parents and fighting back against CRT being taught in schools by co-sponsoring the Parents Bill of Rights Act, the CRT Transparency Act, and the Crucial Communism Teaching Act.

Ensuring secure and fair elections is critical for our government to function.

Mike stands for voter ID laws that make voting hard to cheat. Arguments that this requirement somehow causes voter disenfranchisement is intellectually dishonest and easily disproved. You need ID to drive, rent an apartment, and even get a COVID-19 vaccine.

Other states should look to Ohio for election security best practices. The Supreme Court in 2018 upheld Ohio’s model for maintaining accurate voting rolls, which removes registrations after six years of inactivity and failure to respond to correspondence from the state. Ohio also requires voters to request an absentee ballot before sending them. This combination prevents the massive potential for fraud that states like California encounter by automatically mailing absentee ballots.

Ballot harvesting is a dangerous practice that destroys the integrity of the secret ballot and is rife with abuse.

In a free and fair democratic election voters must have confidence that all legal votes are counted and all illegal votes are thrown out. That is why Mike strongly stands against the Democrats partisan attempt in H.R. 1 to federalize our nation’s electoral system.

As a father of three, Mike believes that life is precious and must be protected.

The news that Roe v Wade will likely be struck down by the Supreme Court puts the question of whether or not abortion is acceptable back into the hands of the people - where the Constitution intended.

Democrats have made abortion on demand one of their top issues even though 80% of Americans believe abortion should be illegal in the third trimester. It’s unconscionable that Democrats caved to Planned Parenthood and tried to exclude the Hyde Amendment from spending bills, which would allow your tax dollars to fund abortions. Even worse, Joe Biden revoked the Mexico City Policy, allowing your tax dollars to fund abortions in foreign countries.

Mike is fighting to protect the unborn in Congress by co-sponsoring the Life at Conception Act.

It’s simple. The Constitution IS absolute and the right of the people to keep and bear arms, shall not be infringed.

Strict gun regulations only make things harder for law abiding citizens. Democrat “gun control” proposals do not stop criminals from obtaining illegal weapons and committing violence. Cities like Chicago, New York, and Baltimore have some of the strictest gun laws in the nation and some of the highest rates of gun crimes.

In Congress, Mike is working to protect our 2nd Amendment rights by co-sponsoring bills like the RIFLE Act.

Mike Carey will always defend your right to bear arms and oppose any legislation that infringes on your rights.

Now more than ever, our law enforcement officers need our support and respect. For too long, the radical left has demonized and attempted to defund our police. The result has been more retirements, less recruits, and more crime in our communities.

From the White House to liberal state and local governments, there has been a systemic failure to contain crime in America. It stems from their absurd belief that enforcing the law is somehow morally wrong or even racist. It has paralyzed law enforcement agencies at all levels and created prosecutors who would rather let a dangerous criminal walk out of jail than enforce the law.

In Congress, Mike is working to right these wrongs. He is a co-sponsor of the Protect and Serve Act to establish a new criminal offense for knowingly assaulting a law enforcement officer. He is also co-sponsoring H.R. 82 which would benefit millions of retired officers and first responders by eliminating two provisions of the Social Security Act that unfairly reduce or eliminate their Social Security benefits.

For strong, safe communities we must Back the Blue.

The Biden Border Crisis must be taken seriously and it must be solved. Since the start of the Biden Administration, more than 2.4 million border apprehensions have been made, deportations dropped to the lowest level in 26 years, and more fentanyl has been trafficked into our communities than ever before.

In Biden’s first year alone, the illegal immigrant population in the U.S. grew by one million – that’s larger than the population of Columbus, Ohio.

Joe Biden and his absent “border czar,” Kamala Harris took the most secure border we’ve ever had and weakened it to the point where 42 known terrorists felt comfortable enough to attempt to enter our country.

Biden’s open border policies created a humanitarian crisis, a crime crisis, and a fentanyl crisis that has caused overdoses to become the leading cause of death for Americans aged 18-45.

In Congress, Mike is fighting for tougher border policies by co-sponsoring bills such as the Border Security for America Act, Migrant Relocation Transparency Act, and the Border Czar Accountability Act.

We must recommit to strong border policies because a nation that cannot control its borders is not a nation.

Our nation is blessed with an abundance of coal, natural gas, and oil that provide the base load electricity needed to power our lives and our future. Republicans understand that fact and embrace a true all of the above energy strategy that made the United States energy independent for the first time in over 60 years under President Trump.

The fact is, we cannot electrify the economy by eliminating our most reliable sources of electricity. We must invest in new fossil fuel technologies as well as renewables because we need more electricity to run a 21st century economy, not less.

Unfortunately, the Biden Administration and Democrats in Congress no longer believe in an all of the above energy strategy and want to totally eliminate the use of fossil fuels.

The Democrats don’t seem to understand the consequences of their short-sighted energy policies. When Joe Biden killed the Keystone XL pipeline, he killed thousands of good paying American jobs and by his own Energy Secretary’s admission, the “best way” to transport fuel. By cutting off access to federal lands and refusing to fast-track energy infrastructure and export terminals, the Biden Administration is ensuring the gas prices continue to set record highs.

It is outrageous that this administration would rather beg foreign nations and negotiate with brutal dictators to increase oil production than unleash American energy production.

The Democrat “Green New Deal” will destroy our economy and give the Chinese Communist Party the advantage it needs to expand its role as the world’s largest energy producer.

In Congress, Mike is fighting for American energy independence by co-sponsoring bills such as the Powering America Through Domestic Energy Act and the Keystone XL Pipeline Construction and Jobs Preservation Act.

Energy makes modern life possible and we can no longer allow the Democrats to hold America back.

We have the blueprint to rebuild the strongest economy Americans have ever known - President Trump handed it to us. America First policies gave us a booming economy with consumer confidence at all-time highs. Now Americans are faced with inflation at a 40 year high, record gas prices, and stagnant economic growth.

The Biden-Harris administration and their allies in Congress created our current economic crisis by reversing America First policies and spending trillions upon trillions of taxpayer dollars on their failed far-left agenda.

American families are spending an additional $433 per month this year for the same things they bought in 2021 and businesses are still struggling to find workers.

The big government approach the Democrats have put forward has failed. Americans do not want a government managed future that limits independence, stifles innovation, and further empowers a bureaucracy to over-regulate our businesses and lives.

Mike is working to get our economy back on track by sponsoring the Energy Cybersecurity University Leadership Program Act and co-sponsoring bills like the Protecting Family and Small Business Tax Cuts Act, American Innovation and R&D Competitiveness Act, and the Workforce and Education Partnership Act.

Let’s get back to the economic policies that work - responsible spending, lowering taxes, cutting red tape, demanding fair trade deals, supporting a robust free enterprise system, and putting American workers first so they are prepared for the jobs and careers we need to build a 21st century economy.