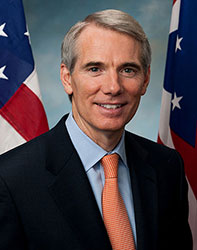 contact senator Rob Portman (R-OH)
Robert Jones Portman is an American politician, currently serving as the junior United States Senator from Ohio. A Republican, Portman previously served as a U.S. Representative, the 14th United States Trade Representative, and the 35th Director of the Office of Management and Budget.

Rob Portman was first elected to the United States Senate in 2010, winning by 18 points. He was reelected in 2016 by an even more impressive 21 points, winning 84 of Ohio’s 88 counties and receiving over 3.1 million votes – the second highest vote total for any elected official in Ohio’s history.

Rob has built a reputation in the Senate as a conservative leader who can bring people together to deliver results. President Trump has signed dozens of Portman’s bills into law, including legislation to combat the addiction epidemic, curb human trafficking, help people better save for retirement, and support members of our military and their families. Rob’s leadership was critical to Congress passing the historic tax cuts and tax reform, and his strong and steadfast support publicly and behind the scenes helped send Justices Neil Gorsuch and Brett Kavanaugh to the U.S. Supreme Court. Rob has an A rating from the NRA and a 100% rating from National Right to Life.

Portman is the co-founder of the Senate Caucus to End Human Trafficking, and he has authored legislation to combat human trafficking that has been signed into law to protect our children and bring criminals to justice. Rob is also a leader in the fight to protect Lake Erie and has passed legislation to help keep our drinking water clean. For more than two decades, Rob has been active in the fight against drug abuse. He started an anti-drug coalition in his hometown of Cincinnati, and has passed laws to address the heroin epidemic and help those struggling with addiction to get their lives back on track.

Rob was born and raised in Cincinnati where he lives today with his wife Jane and their dog, Huckleberry. They have been married for 30 years and have three children – Jed, Will and Sally.

Rob grew up in an Ohio small business family, where he learned early on the value of hard work, leadership, and fiscal responsibility. When Rob was young, his dad, Bill Portman, borrowed money to start Portman Equipment Company, where Rob and his brother and sister all worked growing up.

Rob is still a small business owner. He and his brother are owners of the historic Golden Lamb Inn in Lebanon, Ohio. The Golden Lamb Inn is the oldest continuously operating business in Ohio and has hosted many historical figures, including twelve U.S. Presidents.

In 1993, Rob Portman was elected to the diverse, seven county Second Congressional District in southern Ohio. He represented the Second District for twelve years, and in seven elections, he never received less than seventy percent of the vote.

In 2005, Rob left Congress to serve as the United States Trade Representative. In his one year in the job, Rob was successful in reducing barriers to U.S. exports and increasing enforcement of trade laws to help level the playing field for American farmers, workers and service providers. Under his leadership, American exports increased and the U.S. brought successful legal challenges against international trade law violations.

Following his accomplishments as Trade Representative, Rob was asked to serve as Director of the Office of Management and Budget. A deficit hawk, Rob made his mark by proposing a balanced budget, fighting irresponsible earmarks, and putting in place new transparency measures for all federal spending.

In his free time, Rob enjoys biking, kayaking, hunting, and spending time with his family.