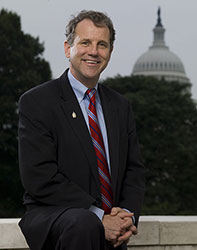 Know more about Senator Sherrod Brown (D-OH)
Sherrod Campbell Brown is an American politician serving as the senior United States Senator from Ohio, a seat to which he was first elected in 2006

Brown was born in Mansfield, Ohio, on November 9, 1952. He served as an Eagle Scout in 1967. Three years later, he graduated from Mansfield Senior High School. He subsequently enrolled in college. In 1974, he got his Bachelor’s degree in Russian Studies at Yale University. During his days at Yale University, he lived at Davenport College, where he worked on McGovern’s presidential campaign. He furthered and received a Master’s degree in Education at Ohio University in 1979. He also got a degree in Public Administration in 1981.

After his Master’s degree, he taught at Mansfield University from 1979 to 1981.

Brown started his political career after he was appointed to run for a seat at the Ohio statehouse. In 1974, Brown was elected to the statehouse, becoming the youngest elected member of the House. He was re-elected again thrice and served from 1974 to 1982. But, Brown left the House to run for Ohio Secretary of State. Fortunately, he won his primaries and defeated the Republican nominee in the general election. He served till 1990, when he lost his reelection to Republican Bob Taft.

In 1992, Brown moved to Lorain, Ohio. There, he ran for a seat at the US House of Representatives. He won the position and assumed office in 1993. He was re-elected six times till 2007.

In 2005, Brown denied intentions about occupying a seat at the US Senate. But, he later receded on his decision. Fortunately, he heavily won his Democratic primaries to advance to the general election. In 2006, Brown defeated Republican incumbent Mike DeWine with 56% votes. He assumed office the following year. He was re-elected in 2012 and 2018.

Brown has worked hard for legislative reforms on energy policies. He led the fight towards energy production and dominance. He also worked to decrease the nation’s independence on foreign fuel. Besides creating manufacturing jobs, Brown has also made legislative achievements towards effective job policy.

Besides, he has been instrumental in cutting unnecessary government spending. While promoting fiscal responsibility, Brown supported a freeze on spending subjected to the Appropriation process. This will save $400 billion. His healthcare reforms also saw to the saving of more than $1 trillion in less than two decades. Brown’s administration also focused on supporting and protecting older people and war veterans. He fought to protect Social Security and Medicare from privatization. He has also been a strong voice in repealing attempts to undermine the benefits that they deserve.

Since his assumption to the office, promoting the quality of healthcare for every American has been one of his top priorities. He has supported commonsense healthcare bills and reforms to promote affordable and quality access to healthcare.

He also championed the promotion of the agricultural sector in the state. He is a member of the Senate Agriculture Committee, and he has worked hard to support farmers.

Senator Brown has faced criticism on issues of sexual abuse and domestic violence. One of the instances was when Republican opponent Renacci alleged him of sexual abuse. He revealed that many women had contacted him on cades of sexual abuse by Senator Brown. Brown also allegedly abused his ex-wife before they divorced. Decades later, Renacci brought up the issue, and private organizations called for his resignation. Yet, none of the allegations were proven.

Brown was also under scrutiny for alleged illegal drug dealing in 1985. But, he was acquainted after a police investigation.

According to OpenSecrets, Senator Sherrod Brown’s estimated net worth is $263,000.

Senator Brown’s administration fostered economic development and national security. He championed job creation in the state. But, he was criticized for allegations of domestic violence and sexual abuse. He was also under fire for allegedly drug dealing. Yet, he was acquainted with all charges.