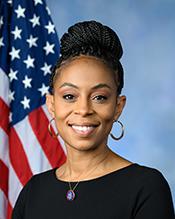 Representative Shontel Brown is a proven leader and coalition-builder who proudly serves Ohio’s 11th Congressional District, including Akron, Cleveland, and its eastern suburbs.

Before being sworn into Congress in November 2021, the Cleveland native served as a Cuyahoga County Councilmember and Warrensville Heights City Councilmember. While serving on the County Council, Rep. Brown instituted a countywide 911 text message system; wrote the bipartisan bill that declared racism a public health crisis; worked to end no-bid government contracts; and protected residents from lead exposure and poisoning.

In 2017, Rep. Brown was elected Chairwoman of the Cuyahoga County Democratic Party, leading the state’s largest Democratic county. She is the first woman and first Black person to serve in this role. She works tirelessly as Chair to strengthen the party and engage voters and activists, delivering consistent Democratic victories throughout the county. Rep. Brown’s proven track record includes:

In her first week in Congress, Rep. Brown helped pass historic legislation to bring economic relief and recovery to the American people through the Bipartisan Infrastructure Law. The Infrastructure Law will bring good-paying, union jobs to Northeast Ohio and provide our state with $9 billion to repair roads, $1.2 billion to modernize public transit, $1.4 billion to deliver clean water to families, and $100 million to expand access to high-speed internet.

Rep. Brown has been a coalition builder in Congress, working across the aisle and across the party to introduce legislation to improve veteran health and expand access to school meals. She has also cosponsored legislation to protect workers against unfair trade practices, raise the minimum wage, and provide affordable healthcare for all. In Congress, Rep. Brown is carrying forth the legacy of her mentor and predecessor, Housing and Urban Development Secretary Marcia Fudge.

An End to Gun Violence.

Like many communities in our nation, homicide rates and gun violence in parts of Northeast Ohio are serious problems. In April, Cleveland NBC affiliate WKYC reported, “homicides (in Cleveland) increased by 45% from 2019 to 2020. In Akron, that figure was up 52%.“ Unfortunately, Black and Brown communities are disproportionately impacted by this growing public health crisis.

Everyone in our community is entitled to live safely from gun violence. It is about taking firearms off our streets and addressing crime and mental illness. Together, we must stop gun violence—and I will take on the NRA and work with our leaders to get it done.

Addressing the long-term root causes of gun violence, including investing in education and our youth through community violence interventions, summer programs, and employment opportunities for all. We must also provide funding for suicide prevention, including requiring health insurance plans to cover mental health needs, and creating more opportunities.

Requiring Universal Background Checks for gun sales. Every person purchasing a gun should undergo a background check. I will support legislation to close the Charleston Loophole and work with the Biden Administration to execute the strategies identified in The American Plan, including calling on members of Congress to repeal the Protection of Lawful Commerce in Arms Act (PLCAA), which gives dealers and manufacturers immunity from liability for their products.

Banning gun sales to anyone who was convicted of a hate crime or domestic violence. We must create stronger safeguards to protect all victims, including those impacted by hate crimes. I will work to enact legislation that bans firearm sales to anyone convicted of domestic violence or a hate crime. I strongly support the No HATE Act, which would provide local law enforcement with better tools to combat hate crimes and improve reporting.

Holding gun manufacturers accountable for the harm their products cause. We must enact groundbreaking legislation to promote gun reform and make a firm commitment to public safety. Right now, gun manufacturers are legally protected from being held liable for the harm their products cause. I will work to eliminate the special loophole created just for gun-makers and hold dealers accountable when they violate federal gun laws.

Banning assault weapons and high-capacity magazines from our communities. We need to reinstate the assault weapons ban, ban the sale of high-capacity magazines that are often used in mass shootings, and prohibit the selling of plastic 3D guns online. In addition, I will ban the sale of gun kits that turn semi-automatic weapons into fully automatic weapons.

Supporting gun buy-back programs that have been effective in cities across the country, including Northeast Ohio. I believe it is necessary to provide federal tools and resources to law enforcement to combat violent crime. Programs in Cleveland and other communities have resulted in the collection of thousands of firearms and handguns, and I will continue to support law enforcement in executing this vital program.

A Bold Recovery from COVID.

In Congress, I will work in partnership with President Biden and Vice President Harris for a comprehensive health and economic recovery from the pandemic. I stand with the Biden-Harris Administration in prioritizing health equity and am committed to ensuring that all future COVID relief is distributed equitably.

A comprehensive recovery from the pandemic should include the following components – many of which are in Biden’s COVID relief plan:

I will partner with the Administration to develop safe strategies for re-opening our economy and creating good-paying, permanent jobs in Cuyahoga and Summit Counties.

Ohio’s 11th Congressional District includes some of the richest and poorest communities in the country. Too many of our neighbors rely on emergency rooms because they do not have a primary care doctor. In the richest country on earth, nobody should go without health care.

I will work with the Biden-Harris Administration to pass a high-quality public option that will lower costs, drive down prescription drug costs, and expand coverage to achieve universal health care. I believe a public option that President Biden supports is the fastest and most immediate mechanism to get there. I would vote for Medicare for All if it came to the House floor.

Too many Ohioans cannot afford their prescription drugs, while drug companies make higher and higher profits. We need to pass legislation that allows Medicare to negotiate lower prescription drug costs, end big drug companies’ tax breaks for advertising, and end backroom deals like “pay for delay,” which limits competition from generic drugs and drives up our costs as patients.

My work with First Year Cleveland inspired me to write and pass landmark legislation declaring racism a public health crisis in Cuyahoga County. But we have a lot more work to do, as racial disparities in health care have only been exacerbated during the pandemic. I am glad that the Biden-Harris Administration is prioritizing health equity and will continue to work for equitable distribution of COVID relief.

Additionally, I will work to tackle the high infant and maternal mortality rates. The mortality rate for Black infants in Ohio is three times as high as the rate for white infants. Black women are three to four times more likely to die from childbirth and pregnancy-related causes than white women. We should extend Medicaid coverage – which covers nearly half of all births – from 60 days to one year for new moms. We must act to remove discrimination and bias in health care. I am a strong supporter of Birthing Beautiful Communities, a Cleveland-based group providing culturally sensitive education and advocacy to women during and after pregnancy, and should I have the honor to be elected Congresswoman I will continue to support community-based solutions to this crisis.

Too many Ohioans cannot afford some combination of housing, health care, education, and utilities. We need to make them all more affordable for families.

I support the Biden-Harris plan to make child care more affordable, which includes relief for child care providers in danger of closing, expanding child care assistance, and increasing tax credits to cover child-care costs. I will fight to pass paid family and medical leave, which is critical to supporting families as they address health and caregiving needs. I also support universal Pre-K, free community college for all, free four-year public college for families making under $125,000, some college debt cancellation for everyone, with additional relief that goes to the people who need it most, and significant federal investments in pathways to the middle class that do not require a four-year college degree.

Should I have the honor to be elected, I will fight alongside Senator Sherrod Brown to dramatically cut childhood poverty by making the recent changes to the child tax credit permanent. I also plan to pick up former Congresswoman Fudge’s mantle and finish the fight to make sure no American goes hungry. Of course, this includes fighting to pass the PRO Act, which strengths unions and empowers workers. And like Secretary-designate Congresswoman Marcia Fudge, I support a path to a $15 minimum wage that indexes to inflation so it has built-in increases.

Neighborhoods across Northeast Ohio have seen housing costs skyrocket. I support COVID relief legislation that imposes a moratorium on evictions. I will also work to make housing more affordable by ending discriminatory practices like redlining; provide down-payment assistance through a refundable tax credit; and will work to increase the supply of housing.

This pandemic has only underscored the challenges of the digital divide in Northeast Ohio, from children falling behind in virtual school or struggling to do homework, to veterans that cannot access virtual visits and telehealth. I plan to fight for the resources to connect every community to high-speed, broadband internet.

Here in Northeast Ohio we have struggled to keep up with increases in water and wastewater rates. As utility companies and municipalities have sought to bring our dated infrastructure into compliance with Clean Water Act standards, they passed the costs onto consumers. I am committed to continuing Congresswoman Fudge’s initiative to lower water bills through the Low-Income Sewer and Water Assistant Program Act (LISWAP).

I will be proud to support the George Floyd Justice for Policing Act, which increases accountability for law enforcement misconduct, improves data-collection and transparency, and eliminates discriminatory policing practices.

In Cuyahoga County, I have sought to develop options so that people who call 911 have a crisis intervention option, and don’t have to rely on the police. Accordingly, I will champion the Crisis Assistance Helping Out On The Streets (CAHOOTS) Act.

I am proud to be a key part of a new generation of leaders that strongly believes in environmental justice. I support the principles laid out in the Green New Deal and I am committed to aggressive action on climate change with net-zero emissions by 2050 and a carbon-free power sector by 2035. We can achieve those goals, create millions of jobs in every part of America, and bring down the cost of electricity. Clean energy actually costs less for families. In addition, I support upgrading America’s infrastructure with investments in roads, airports, water infrastructure — and connecting every community in Ohio to high-speed, broadband internet.

Also, for the sake of our democracy, I support initiatives to get money out of politics, overturning Citizens United, and banning Members of Congress from becoming lobbyists. In Congress, I will champion the For The People Act and The John Lewis Voting Rights Act, which will expand voting rights, limit gerrymandering, create new ethics rules, and reduce the role of money in politics.