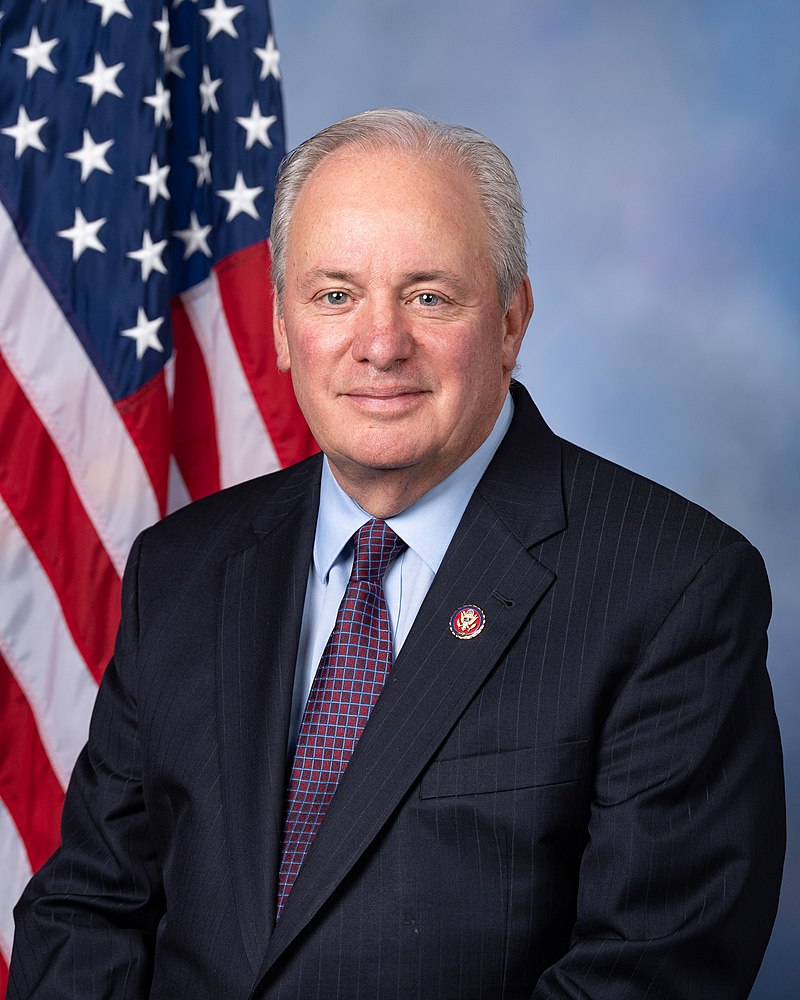 Contact Representative Michael F. Doyle
Michael W. Doyle is an American international relations scholar who is a theorist of the liberal "democratic peace" and author of Liberalism and World Politics. He has also written on the comparative history of empires and the evaluation of UN peace-keeping.

Mike Doyle is currently serving his fourteenth term in Congress representing the 18th District of Pennsylvania, which includes the City of Pittsburgh and 53 other communities in Allegheny County.

Congressman Doyle is a member in the House Democratic Caucus and the founder and co-chair of the Congressional Autism Caucus, also known as the Coalition for Autism Research and Education (C.A.R.E.).

He is also one of the founders and co-chairs of the House Distributed Generation Caucus, which works to promote the widespread adoption of decentralized power generation technology that is both fuel efficient and environmentally friendly and reduces peak demands on our nation’s over-utilized electricity transmission grid – and he is a member of the House Hydrogen and Fuel Cell Caucus, which promotes hydrogen and fuel cells.

Congressman Doyle also co-founded and chairs the House Robotics Caucus, which works to ensure that our nation remains globally competitive in the field of robotics.

Doyle also serves on several other important Caucuses, such as Steel, Human Rights, and the Internet.

He is a member of the Leadership Pittsburgh Alumni Organization, the Ancient Order of Hibernians (AOH), the Italian Sons and Daughters of America (ISDA), and the Penn State Alumni Association.

Doyle is a graduate of Penn State University, where he received a Bachelor of Science degree in Community Development in 1975. Prior to serving in Congress, Doyle was a small business owner and the Chief of Staff for State Senator Frank Pecora. Doyle and his wife, Susan, reside in Forest Hills and have four children: Michael, David, Kevin, and Alexandra.

All Americans – regardless of race, religion, disability, gender, or sexual orientation – are guaranteed equal rights to life, liberty, and the pursuit of happiness. I am deeply committed to protecting equal rights and ensuring that all Americans can pursue their dream. Racism, discrimination, bigotry, hate speech, and hate crimes have no place in our country. We must continue to strengthen anti-discrimination laws and level the playing field for everyone.

Structural racism is built into our society in countless ways. It will take an organized, sustained effort to address systemic and structural racism, but we must. Until we do, our country cannot fully succeed.

Some policies I am focused on in the 117th Congress include:

Voting is the cornerstone of any democracy, but efforts in the U.S. to disenfranchise minority voters have a long history and continue to this day. We should be encouraging every citizen to vote and making it easier for them to do so.

Even after marriage equality was recognized in 2015, LGBTQ+ Americans continue to experience pervasive discrimination and violence.

In the 117th Congress, some of the ways I am supporting LGBTQ+ Americans include:

Women are marching forward to show that their rights cannot be ignored, pushed aside, or debated without their input. I am proud to support legislation that – more than just protecting their equal rights – empowers them to break glass ceilings.

In the 117th Congress, I am supporting women across the country by:

It is clear that climate change is real, it is affecting our communities today, and it will get worse if we do not take aggressive action to cut our greenhouse gas emissions. We are seeing hotter temperatures lead to worse wildfires and draughts, rising sea levels and warmer water cause major flooding and devastation to fishing economies, and more extreme weather events are becoming more common. The Intergovernmental Panel on Climate Change (IPCC), which is the United Nation’s scientific research body for climate change, has concluded that in order to stave off the worst effects of climate change we must get our economy to net zero emissions of greenhouse gases by 2050. This conclusion was the result of thousands of research papers from scientists all over the world. Climate change is truly a global problem, and the United States must be a leader guiding the world to a cleaner energy future and a healthier planet for future generations.

Public lands, endangered species, and vulnerable ecosystems all play a vital role in our economy, and in the fight against climate change. We must protect vulnerable habitats and preserve our national treasures. Here are some of the things I am working on in the 117th Congress:

I believe that education can change lives and make our country a better place. Education creates productive workers who fuel the economy and improve standards of living for everyone. Education is also the engine that drives the U.S. leadership in research, technology, education, health care, and commerce. At the same time, education enables individuals to grow and change their own circumstance.

That’s why I believe that the federal government should be investing heavily in education at all levels, and for all Americans. No American should be denied a high-quality education as a result of financial need or because of where they grew up.

In the 117th Congress, I am working to ensure access to high-quality education by:

Pittsburgh is a testament to the power of education to revitalize a community. It is a hub for higher education and knowledge-based industries that are producing significant economic growth, but there are still gaps in educational opportunities that we need to address. I will continue to support education at all ages so that every American can reach their potential.

In our increasingly interconnected world, the foreign policies carried out by the U.S. Government have an impact on all of us - either directly or indirectly. Our country faces a number of serious foreign policy problems – not the least of which is terrorism. I strongly believe that a thoughtful U.S. foreign policy can save countless American lives – and that it can improve our standard of living.

In the 117th Congress, I’m calling for a strong, smart approach to foreign policy by:

The most effective means of achieving these goals are usually diplomatic, not military, and involve the US government working with other countries to achieve our international and national security goals.

According to the U.S. Centers for Disease Control, more than 36,000 Americans are killed by guns each year, an average of 100 per day. Our region isn’t immune to this terrible trend; the deadly attack on the Tree of Life Synagogue in Pittsburgh makes that all too clear.

Such a high number of deaths and injuries isn’t inevitable. I firmly believe that there are policies that the federal government can adopt to reduce the number of gun deaths committed in our country each year, and I am working actively in Congress to have them enacted into law.

In the 117th Congress, I am working to end gun violence by pushing for legislation that:

As a member of the Gun Violence Prevent Task Force, I believe that these are commonsense steps to combat gun violence. I am passionate about ending the epidemic of gun violence in our country, and I believe that all of us in Congress have a responsibility to prevent more of these terrible tragedies from happening.

I believe that all Americans should have access to affordable, high-quality care. As a senior Member of the House Energy and Commerce Committee, I have spent years in Congress working to make health care in the United States better, more affordable, and accessible to all Americans.

In the 116th Congress, some of the ways that I am working to improve health care for all Americans include:

Medicare and Medicaid help to provide much-needed financial security and dignity to more than 100 million Americans. Seniors, individuals with disabilities, and working families rely on these programs to access the health care services they need. No American should have to choose between bankruptcy and medical treatment.

In the 116th Congress, I am acting to protecting Medicare and Medicaid by:

I will continue to protect the progress we have made in securing access to health care for millions of Americans and support bills that would provide better, more affordable coverage for all Americans.

I believe that the United States has been made great by immigrants and I am proud of our history of welcoming those pursuing better lives. Nevertheless, I know that our immigration system is in desperate need of compassionate, comprehensive reform.

I was opposed to the Trump Administration’s misguided and oftentimes cruel immigration policies, and I will be working with the Biden-Harris Administration to reverse:

Democrats and Republicans must come together and work towards a fair solution to our immigration challenges.

Creating jobs and revitalizing Pittsburgh’s economy has been my top priority throughout my service in Congress. I have worked to promote economic growth and job creation across the nation – and especially in southwestern Pennsylvania.

I have secured federal funding for a number of local research and development initiatives - including Carnegie Mellon University’s CyLab, the Pittsburgh Tissue Engineering Institute, the National Robotics Engineering Consortium, the National Energy Technology Laboratory, the National Center for Defense Robotics, the Energy Innovation Center, and the Pittsburgh Supercomputing Center - all of which have helped transform the region into a job-creating high-tech hub.

In the 117th Congress, I’m working to create a sustainable workforce and boost our economy by:

I will continue fighting in the House to provide more federal support for such efforts.

I was born and raised in Pittsburgh, and I’ve lived here all my life. I love this region, and I’m working in Congress to make life for everyone in our region better and more prosperous.

Much of my work in Congress focuses on legislation addressing national issues – and of course, any legislation enacted by Congress affects the people of Southwestern Pennsylvania along with the rest of the country. Please see below for more information about how I’ve been working to support our region specifically.

Income inequality is at an all-time high across the country. With stagnant wages and federal policies slanted in favor of the wealthiest Americans, working Americans are putting in the hours and failing to see increased opportunities for themselves or their children. I am advocating for programs that are there to provide help when families need it.

Unfortunately, many of these programs have been underfunded and targeted for even more cuts. Even in the midst of the COVID-19 pandemic, the Trump Administration showed little enthusiams for programs that support the most vulnerable people in our society, like the elderly, the disabled, veterans, children, and working families who can barely make ends meet.

In the 117th Congress, I’m working to ensure that these programs help all of the Americans who need it, including:

Every American should be able to enjoy retirement and live healthy, fulfilling lives without worrying about making ends meet.

Social Security is the single largest source of income for people aged 65 and older, and I am dedicated to protecting it and ensuring its survival. Working Americans have paid into Social Security their whole lives, and Congress needs to ensure that the program can meet the demands of a growing population of older Americans who are living longer.

In the 117th Congress, I am supporting Social Security by:

I will continue to advocate for the future of Social Security, ensuring that this vital program continues to be there to support all Americans.