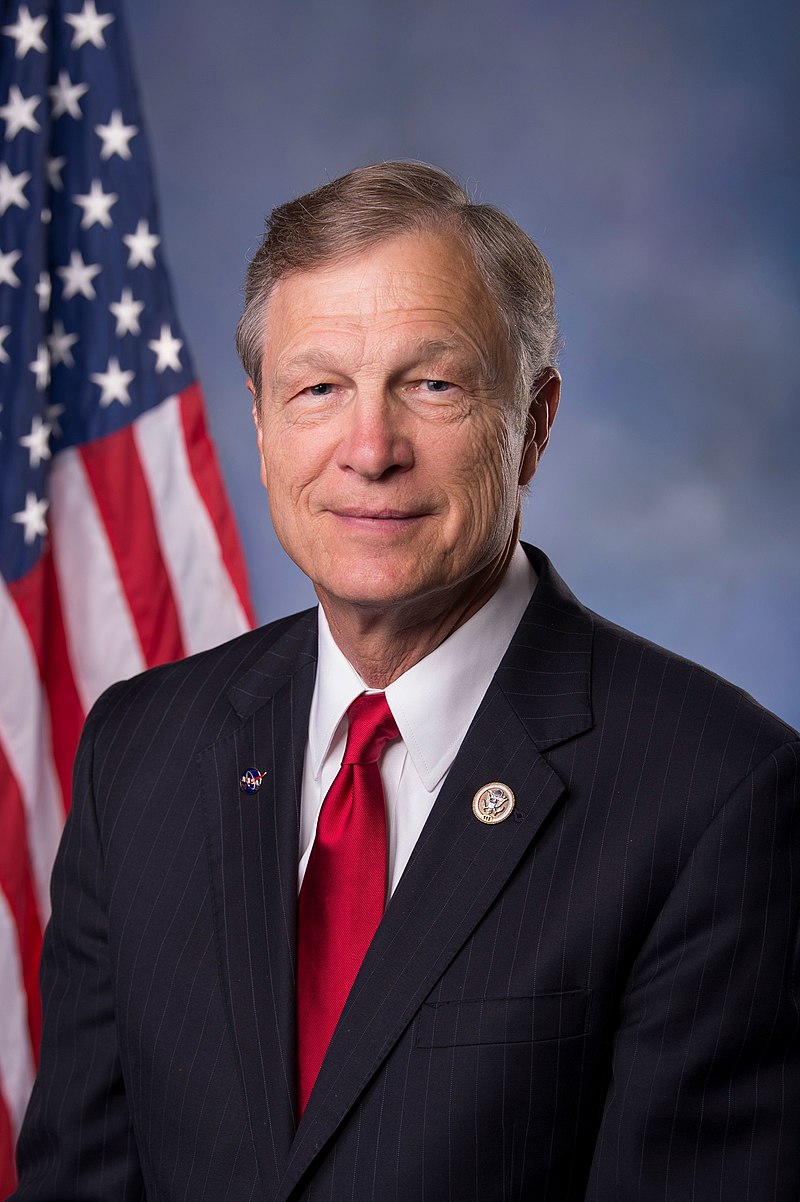 Contact Representative Brian Babin
Brian Philip Babin is an American dentist, politician and member of the Republican Party who has served as the U.S. Representative from Texas's 36th congressional district since January 2015.

Brian Babin is a life-long resident of East Texas. He was born in Port Arthur, Texas and grew up in Beaumont. He graduated with a Bachelor of Science from Lamar University and completed dental school at the University of Texas Dental Branch in Houston, Texas.

Dr. Babin served as an airborne artilleryman in the Texas Army National Guard and the U.S. Army Reserve and held various jobs to put himself through school, including merchant seaman, janitor, musician, disc jockey and U.S. Post Office letter carrier. Following his graduation from dental school, Dr. Babin was commissioned as a Captain in the United States Air Force and stationed overseas at Ramstein, Germany.

In 1979, Dr. Babin returned to East Texas and settled in Woodville where he opened a dental office. Over the past three-plus decades in Woodville, in addition to maintaining his successful dental practice, he has served as Woodville’s Mayor, City Councilman, and as a Woodville ISD School Board Member, and in various other civic roles including Director of the Tyler County Chamber of Commerce and Lions Club President. Since 1999, Dr. Babin has served on the Lower Neches Valley Authority, appointed by then-Gov. Bush and reappointed by Gov. Perry. He has also previously served on the Texas State Historical Commission and the Texas State Board of Dental Examiners. In addition, he has served on the Deep East Texas Council of Governments.

Dr. Babin became involved in politics by supporting the candidacy of Ronald Reagan for President in 1980. Since that time, he has worked to turn what had previously been a heavily Democrat region Republican by building a conservative voting base and encouraging and supporting good local candidates to run as Republicans. More recently he served as an organizer and member of the Tyler County Patriots and has served as a key-note speaker for numerous patriot and veteran’s events and rallies throughout East Texas.

On January 5, 2015, Dr. Babin was sworn in to the 114th Congress. He was appointed to two committees that are critically important to the 36th District of Texas. His service on the House Transportation and Infrastructure Committee affords him the opportunity to address the critical ports, highways, rails, and pipelines that provide thousands of jobs and fuel a hub of economic activity that includes more petrochemical refining facilities than any other district in the country.

Dr. Babin was also appointed to the House Committee on Science, Space, and Technology. Serving as the ranking member of the House Subcommittee on Space he is able to serve as a national leader for America’s space policy matters and represent the interests of NASA’s Johnson Space Center, which is located in the 36th District. As a member of the Subcommittee on Environment, Babin has helped lead efforts to bring transparency and accountability to the EPA, which has threatened our petrochemical and agricultural interests with excessive regulation.

Dr. and Mrs. Babin are members of the First Baptist Church of Woodville, where he has served as a deacon, Sunday school teacher, choir member, and as a member of Gideon’s International. He and his wife, Roxanne, also from Beaumont, have been married since 1972; have 5 children and 16 grandchildren. The couple still resides in Woodville. Making America safe, strong, and economically secure for the future of his children and grandchildren remains his reason for running to maintain his seat in Congress and proudly serve the people of TX-36.

Securing our nation’s borders remains my top priority when it comes to immigration. I strongly support President Trump’s border wall and voted to provide over $1.6 billion to begin its construction. I swore an oath to protect and defend the American people and an unsecure border undermines that promise and their safety. That’s why I have led the effort in Congress to ensure refugees from terrorist hotbeds are fully vetted, deport criminal aliens, and cut off taxpayer funding for “sanctuary cities” that threaten our nation’s immigration laws. To remain a sovereign nation, we must secure and control our borders. I will continue to fight to get this vital need accomplished.

‍#### Restoring Health Care Freedom It has been more than a year since the Senate failed to keep its promise and repeal Obamacare. While this disappointment still weighs on me, I will continue to fight for legislation to repeal and replace Obamacare with policies that restore health care freedom in America. I will not stop working to rescue the American people from this disastrous law. As a health care provider, I know firsthand how Obamacare is destroying the doctor-patient relationship. This one-size-fits-all approach is driving up costs and forcing Americans to buy health care plans that they simply do not want and cannot afford.

America’s future presidents, doctors, preachers, generals, and other leadership roles depend strongly on the efforts of our public educators. My wife, Roxanne, was a teacher so I understand the family sacrifices and after-hours work that teachers dedicate to the education of their students. I will continue to fight for the fairness that teachers deserve with supporting legislation to fix the Windfall Elimination Provision (WEP) that is effecting more than 170,000 Texans, as well as other bills and provisions to restore and help our public education system.

Earlier this year, President Trump signed the Tax Cuts and Jobs Act into law, fulfilling his promise of tax reform to the American people. Hard-working men and women are now able to keep more of their money. Now, wages are rising, thousands of bonuses have been given, and businesses are finally able to expand. The economy is thriving! The House also recently passed legislation to make these tax cuts permanent, so Americans can continue to prosper on a long-term scale.

Jobs are created by building a healthy economy through freedom and opportunity – not burdensome regulations that give unelected government bureaucrats more authority over the American people. Indeed, previous administrations have done too much that stymies U.S. job growth and entrepreneurship. That’s why I am actively working with the Trump Administration to implement pro-growth policies that provide incentives for job creation right here in America.

As a 30-year member of the NRA, I am a rock-solid defender of the Second Amendment. I’m proud to have earned a 100% voting record with the NRA and an “A” rating from Gun Owners of America. In Congress, I have actively introduced, cosponsored, and voted for important legislation that protects the gun rights of all law abiding American citizens.

I am a steadfast defender of the sanctity of human life and protecting the unborn. In Congress, I have earned a 100% rating from the National Right to Life and been actively engaged in the Congressional Pro-Life Caucus. I have also consistently voted to cut off taxpayer funding for Planned Parenthood – the largest abortion provider in the nation. American taxpayer dollars should not be going to such an organization.

I have voted for over a dozen new laws that repeal many of Obama’s last minute, job-killing regulations. With the support of President Trump, we are bringing transparency and accountability to bureaucratic agencies like the EPA. These bureaucrats should work for the American people – not against them!

As a veteran myself and father of a decorated Navy SEAL, I know firsthand that our military must be prepared and second to none in the world. Ensuring that our service members have the equipment and training to deter aggression and defeat it when called upon is vitally important. With the President’s leadership, our military is finally being rebuilt to be stronger than ever before. New destroyers and aircraft are being built, our equipment and technology are being updated, and better training systems are being created for our troops. Plus, our military men and women are receiving the highest pay raise in a decade. America will no longer make idle threats, and we will be ready to face any challenge or adversary that shows itself to us.

The Department of VA must be reformed to ensure our veterans are put first and foremost. For far too long, the VA has been unaccountable to the concerns and needs of America’s veterans. It is critical that our veterans receive the treatment and benefits they have earned and deserve through their service.

As a senior myself, I am committed to ensuring that the federal government fulfills it promises to those who have built their retirement around Social Security and Medicare. I support efforts to strengthen the solvency of both Social Security and Medicare so that it is protected for future generations, but any such plan must make sure that the promise is kept and that no one in or nearing retirement has any changes to their plans.

As the chairman of the House Space Subcommittee, I am firmly committed to reestablishing America’s space program as the global leader in space exploration. The Administration has unveiled space policy directives that will take American astronauts back to the Moon, then Mars, and beyond. As Chairman, I will continue to champion legislation to ensure our space faring capabilities and high-tech jobs remain on U.S. soil rather than overseas. I am also proud to represent the men and women who work at NASA’s Johnson Space Center in Houston, which has been the center of human spaceflight for more than 50 years. I am confident America is on its way to becoming the world leader in space once again, and I will continue working to make sure that whatever surface we land on the first words will always be “Houston…”