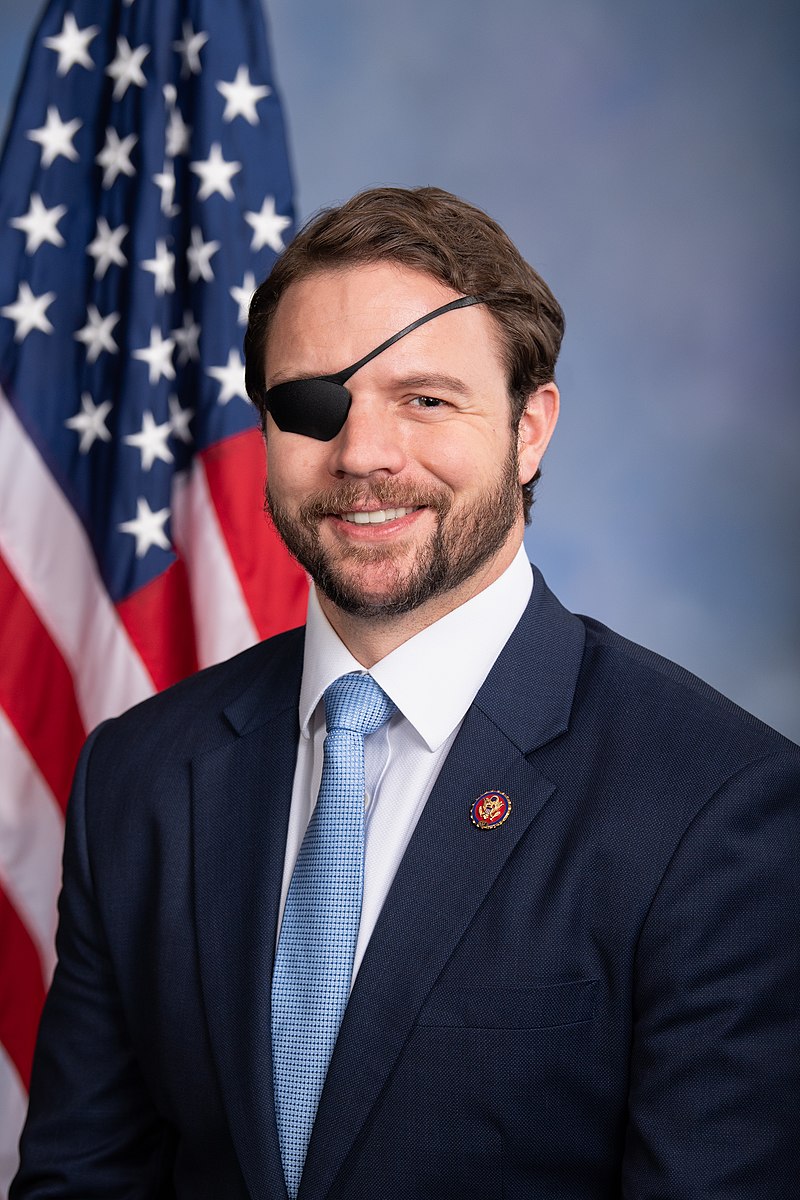 Contact Representative Dan Crenshaw
Daniel Reed Crenshaw is an American politician and former United States Navy SEAL officer serving as the United States Representative for Texas's 2nd congressional district since 2019. The district includes parts of northern and western Houston. He is a member of the Republican Party.

Originally from the Houston area, Rep. Dan Crenshaw is a proud 6th generation Texan. From an early age, Dan knew that he wanted to serve his country with the most elite fighting force in history: the U.S. Navy SEALs. His father’s career in the Texas oil and gas industry moved his family all over the world, including Ecuador and Colombia, where he attended high school. As a result, Dan is fluent in Spanish. In 2006, Dan graduated from Tufts University, where he earned his Naval officer commission through Navy ROTC. Following graduation, he immediately reported to SEAL training in Coronado, CA, where he met his future wife, Tara. After graduating SEAL training, Dan deployed to Fallujah, Iraq to join SEAL Team Three, his first of five deployments overseas.

On Dan’s third deployment in 2012, his life changed forever. After six months of combat operations, he was hit by an IED blast during a mission in Helmand province, Afghanistan. He was evacuated and awoke from his medically induced coma learning that his right eye had been destroyed in the blast and his left eye was badly damaged. Dan was completely blind and the doctors did not believe he would ever see again. Tara stood by him every day and night, keeping faith and praying he would see again. After several difficult surgeries and months of fighting a tough diagnosis, Dan eventually regained sight in his left eye, a miracle according to the head surgeon. Dan refused to quit and went on to deploy twice more, first back to the Middle East in 2014 and then South Korea in 2016.

Dan was medically retired in September of 2016 as a Lieutenant Commander after serving ten years in the SEAL Teams. He left service with two Bronze Stars (one with Valor), the Purple Heart, and the Navy Commendation Medal with Valor, among others. Soon after, Dan completed his Master’s in Public Administration at the Harvard Kennedy School of Government. Dan then returned to Houston, where his community was hit by Hurricane Harvey. The storm brought devastation the region had never seen. He spent his time volunteering in areas of Katy, helping his neighbors recover from the damage. He saw first-hand the unthinkable losses that Texas suffered, but he also saw Texan grit and resilience. This inspired him to do more for his community. Dan and Tara decided that the best way to serve the people of Texas would be in elected office.

Dan believes in service before self and understands that there is no higher calling than service to the American people. Although he can no longer fight on the battlefield, the integrity, leadership, vision, and tenacity he learned in the SEAL teams are present every day in his fight for common sense solutions in Congress.

Our youth are our future leaders. I’m a vocal advocate for students in our community and frequently speak to schools and youth groups to encourage them to think big and emphasize the importance of hard work, and having a sense of purpose and vision.

It is crucial that we prepare the next generation for the workforce. We must promote vocational training as a sensible alternative to a college education and allow for Pell Grant flexibility to allow students the option to choose technical education programs.

We are currently unable to protect our sovereignty because of the situation at the border. Illegal immigrants are abusing our asylum process. While the President has taken action to improve the conditions at the border, Congress has to reform our laws for there to be a substantial change. Democrats refuse to address the issue at its source and are advocating for open border policies. This is wrong and unfair to legal immigrants, asylum seekers, migrants who are trafficked, and the Customs and Border Protection agents at the border. We must act now.

America is the leader of the free world, and should not back down from this responsibility. We can never forget the atrocities of September 11th, and what occurs when you allow terrorists to operate freely in ungoverned areas. We must continue to take the fight to ISIS. I have been doing that for my entire adult life.

The threat of ISIS is not the only major concern we face on the global stage. We must be wary of Russia, China and North Korea. These countries and their world views pose legitimate threats to America and must be taken seriously.

The Declaration of Independence and the US Constitution represent the greatest ideas that humankind ever had. It was the moment that we wrote down our inalienable rights – life, liberty, and the pursuit of happiness – and said that the role of government was simply to protect those rights, not create new ones or change them. The purpose of law is to implement justice, and protect our citizens from injustices committed against them. The purpose of law is NOT to engage in endless redistribution and regulation, with false promises that inevitably leads to the removal of individual freedoms. We must protect these time-tested principles of governance if we are to continue to be the most successful experiment in the history of mankind.

When it comes to defending our rights, I’m adamant about protecting our constitutional right to bear arms. I will always fight for Second Amendment rights. This right must never be infringed upon, but we must do a better job of enforcing current laws, especially background checks, so that guns stay out of the wrong hands. I will never allow the government to prevent law-abiding citizens from defending themselves.

I’ll also fight to protect our First Amendment. Our country is frighteningly close to violating our Constitution by allowing the left to shout down and shame anyone who disagrees with them. Social media platforms are shutting down conservative opinions. We need to encourage and inspire conservatives to stand up to this leftist bullying, and urge social media companies to develop clear and concise rules that are easy to understand.

I am focused on health care solutions that lower your costs at the pharmacy counter, increases transparency, and puts YOU in control of your health care decisions, not the federal government.

Democrats in Congress are proposing massive government takeovers of our health care system with proposals like Medicare for All and pharmaceutical price controls. These policies will force you into a one-size-fits-all, government-run health plan, and restrict your access to new innovative cures.

I understand all too well the experience of being a patient in socialized medicine, both in the military and the VA. When no one is held accountable, and there’s no competition, quality of care suffers and prices skyrocket. That’s why a single-payer system is not the answer.

Free-market principles have allowed our economy and job market to thrive. We must stand for pro-growth policies, because we cannot lift the poor out of poverty or raise middle class wages without a strong and growing economy. This is common sense economics, and we must show leadership to make it happen.

While pro-growth policies have stimulated this economy, we cannot ignore the necessary reforms to our entitlement programs. We must reform programs like Medicare and Social Security to save them. Our seniors deserve and earned these benefits, let’s ensure they’re around for future generations as well. But the answer isn’t taxing the next generation. The answer is common sense reforms. As our runaway debt continues to grow exponentially, any reforms must be fiscally responsible.

Congress should be working on policies to safeguard our environment AND our economy. That’s why I’m working on serious solutions to protect American jobs, our economic prosperity, and reduce emissions all at once. I proposed legislation called the New Energy Frontier as part of the Republican environmental plan. This bill takes carbon capture – which we have pioneered here in Texas – and encourages further innovation so we can market this technology to the world to tackle GLOBAL emissions. Unlike the Green New Deal, I’m focused on solutions and not just slogans. We do not need a socialist takeover of our entire economy in order to protect the environment. What we need is to encourage American innovators to develop a clean, all-of-the-above energy strategy that will allow us to continue emissions reductions and historic economic growth.