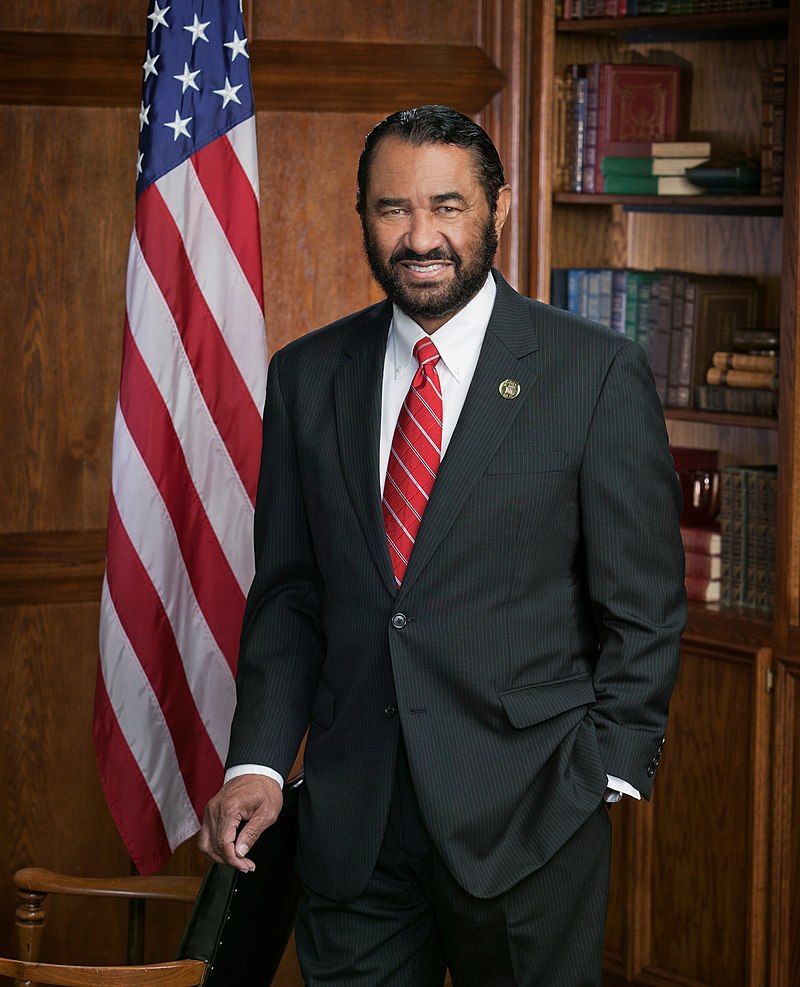 Contact Representative Al Green
Alexander N. Green is an American lawyer and politician. Green has served in Congress as the Representative for Texas's 9th congressional district since 2005. The 9th district includes most of southwestern Houston, part of Fort Bend County and most of Missouri City. Green is a member of the Democratic Party.

On January 3, 2021, U.S. Congressman Al Green took the oath of office to serve the people of Texas’ 9th Congressional District and began his ninth term in the United States House of Representatives. As a veteran civil rights advocate, he has fought for those in society whose voices, too often, are not heard.

Congressman Al Green currently serves on the Financial Services Committee as well as the Committee on Homeland Security. On the Financial Services Committee, he serves on three subcommittees: Diversity and Inclusion; Housing, Community Development, and Insurance; as well as Oversight and Investigations, where he holds the position of Chair. On the Committee on Homeland Security, he serves on two subcommittees: Emergency Preparedness, Response, & Recovery and Border Security, Facilitation, & Operations.

Born in New Orleans, Louisiana, Congressman Al Green’s family taught him the importance of positive preparation through education and righteous resistance to overcome persistent injustice. He attended Florida A&M University, Howard University, and the Tuskegee Institute. Without receiving an undergraduate degree, he enrolled in the Thurgood Marshall School of Law, where he earned his Juris Doctorate in 1973. As a law student, he earned awards in Federal Procedure and Conflicts.

After graduating from law school, Congressman Al Green co-founded and co-managed the law firm of Green, Wilson, Dewberry, and Fitch. In 1977, he was appointed Justice of the Peace in Harris County, Texas, where he served for 26 years before retiring in 2004. Throughout his career, Congressman Al Green has enjoyed the respect of his colleagues as well as a wide cross-section of community leaders, who have praised his legal skills, impeccable character, and ability to work with people of diverse backgrounds.

For approximately ten years, Congressman Al Green served as president of the Houston Branch of the National Association for the Advancement of Colored People (NAACP). Under his leadership, the organization grew to unprecedented heights, increasing membership from a few hundred to many thousands, and the staff from one to more than ten.

As a testament to his exceptional service to the community, and in recognition of his outstanding professional achievement as well as his superior leadership ability, Congressman Al Green has received numerous awards and accolades. Steadfast in his commitment to serving the communities he represents in Congress, he is a member of the Congressional Asian Pacific American Caucus (CAPAC) as well as the Congressional Black Caucus (CBC). Congressman Green holds memberships in several community organizations, including Alpha Phi Alpha Fraternity, American Federation of State, County, and Municipal Employees (AFSCME), League of United Latin American Citizens (LULAC), National Association for the Advancement of Colored People (NAACP), and Sigma Pi Phi Fraternity.

As evidence of how truly blessed Congressman Al Green believes he is, when asked, “How are you?” he often responds, “Better than I deserve.”