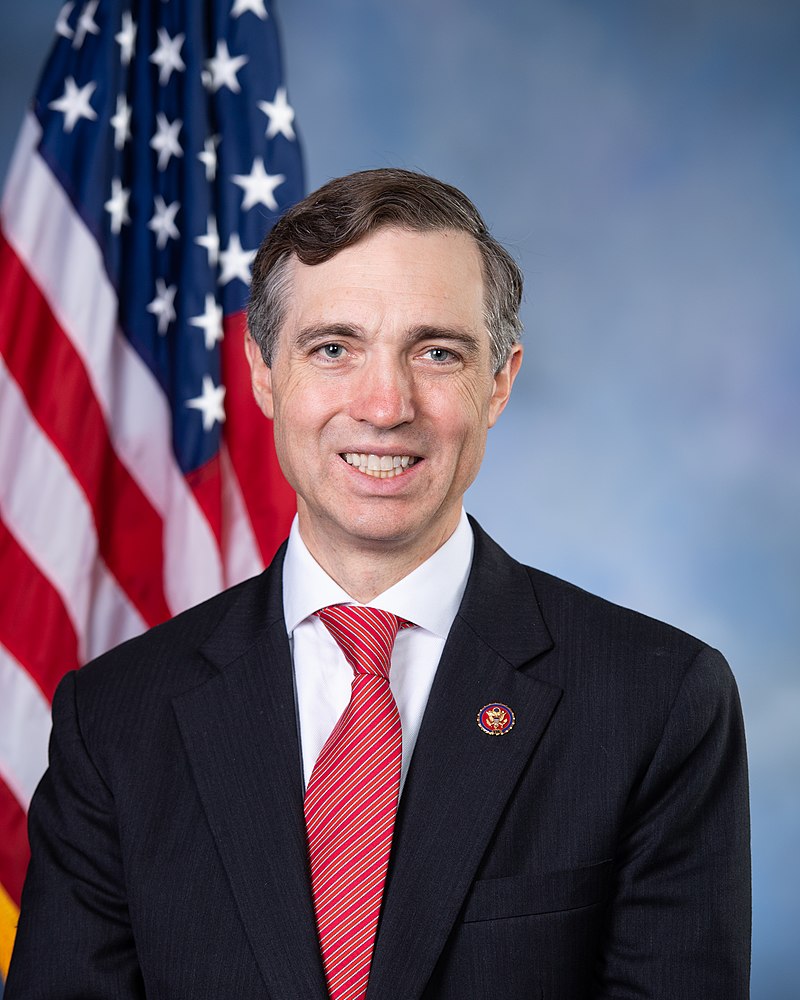 Contact Representative Van Taylor
Nicholas Van Campen Taylor, known as Van Taylor, is an American businessman and politician from Plano, Texas. He is the U.S. Representative for Texas's 3rd congressional district. The district includes much of Collin County, a suburban county north of Dallas.

Van and his wife, Anne, married after his return from Iraq and are the proud parents of three young girls: Laura, Helen, and Susie. The Taylor’s home in Plano is just miles from the land Van’s great-grandfather farmed during the Great Depression, but they spend much of their time cheering on their girls on the soccer fields and volleyball courts.

Van graduated from Harvard and earned his Master of Business Administration (MBA) from Harvard Business School. After business school, Van joined Churchill Capital Company, a firm focused on real estate finance. He also served as Vice Chairman of Texas Gulf Bancshares, leading one of the most financially sound banks in Texas.

After graduating from college, Van volunteered to serve his country and received a commission in the United States Marine Corps. He then joined the Marine Corps Reserves to continue serving his country while earning his MBA.

On September 11, 2001, Van was serving his final day at the 4th Civil Affairs Group at the Anacostia Naval Annex. He was supposed to have lunch at the Pentagon that day, but instead watched smoke rise from across the Potomac River as the Pentagon burned from the 9-11 terrorist attack.

Van swore that fateful day to continue to serve and make a difference. Two years later, he deployed to Iraq where he fought with 2nd Force Reconnaissance Company.

While deployed, Van led the first platoon into Iraq for his brigade and a mission that rescued 31 wounded Marines during the pitched Battle of An Nasiriyah. For his service in Iraq, the Marine Corps awarded Captain Taylor the Combat Action Ribbon, Presidential Unit Citation, and the Navy Commendation Medal with “V” for valor.

Heartbreakingly, pro-abortion radicals support murdering a child who has survived an abortion. I have cosponsored legislation to ban this heinous practice. Additionally, I aided an effort to try to force a vote on this bill through a parliamentary maneuver called a discharge petition.

I cosponsored legislation to prevent any taxpayer dollars from funding abortions and from funding health benefits coverage that includes coverage of abortion.

Through my work in fighting for the unborn, I am proud to have earned a 100% rating from National Right to Life, the oldest and largest pro-life group in the United States.

The very first piece of legislation I signed onto as your Representative was to propose a Constitutional amendment requiring a balanced budget.

In the State Legislature, I authored legislation to force legislative approval when executive agencies attempt to make law through the rulemaking process. In Congress, I joined a similar effort to rein in out of control, unelected bureaucrats who circumvent our Republic by taking lawmaking into their own hands.

I battled our own Republican Party when they wrongly agreed to reinstate earmarks. Although conservatives lost that inter-party vote, I joined with a few dozen others to sign a no earmark pledge honoring our commitment to voters and taxpayers.

I cosponsored a bill which would sunset government agencies that are inefficient and operate outside of their statutory authority, just like the initiative I led in Texas. I coauthored a bill to repeal the death tax.

I authored the Truth in Taxation bill similar to what I passed in the Texas Legislature which would require any bill that raises taxes to clearly state it in the first line of the bill. I cosponsored a bill to audit the Federal Reserve.

For my efforts in advocating for taxpayers and fiscal sanity, I have been honored with the Conservative Union Foundation’s (ACUF) Award for Conservative Achievement, received a 100% score from Citizens Against Government Waste, and was one of only thirteen members of the U.S. House to earn a perfect 100% score from Heritage Action.

PROTECTING OUR AMERICAN VALUES AND CULTURE

I have led on three efforts to combat the racist and inherently un-American teachings of critical race theory. The first two would prevent federal funds going to schools or any entity that teaches critical race theory, and the third prohibits critical race theory in the U.S. military. In the wake of reports that the Biden Administration was considering flying the BLM flag over U.S. Embassies, I joined legislation to prevent any flag besides the American Flag from being flown over our embassies.

I cosponsored a Constitutional Amendment to block liberal efforts to pack the Supreme Court. The radical left’s quest for control has made itself apparent in the space of COVID-19 mandates. To combat these excessive government overreaches, I cosponsored (1) legislation to prohibit vaccine passports, (2) a bill that would prohibit entities that received COVID relief funds from mandating employee vaccination requirements, and (3) legislation that would nullify Joe Biden’s unconstitutional vaccine decrees and prohibit the Department of Labor from issuing vaccination mandates. I also signed on to a letter to Governor Abbott urging him to use every tool in his toolbox to ensure that Biden’s decree doesn’t infringe upon Texans. Further, I signed on to a letter requesting a reevaluation of mask requirements on aircrafts.

Core to our Republic is a basic understanding: only American citizens who are eligible to vote should be participating. Throughout my time in elected office I have investigated voter fraud and election irregularities, even personally calling the FBI on a voter fraud ring we discovered. When you see cases of voter fraud it is deeply disturbing and gut wrenching. Every act of voter fraud invalidates the vote of a law-abiding citizen and minimizes their voice in government. That is why during my time in the Texas Legislature I helped lead the fight to pass our landmark voter ID law. I also filed legislation to link our voter database with the Department of Public Safety (DPS), which has all Texas drivers license information, to ensure that only citizens vote and lead efforts to audit cast ballots with election results.

Meanwhile, in Congress, Democrats are pushing the most radical election destabilization measures I have ever seen. They want to completely end state run elections, having Washington control all elections all the way down to local city councils and school boards. In this plan they ban voter ID laws, create more distrust and fraud in elections with mass unsolicited mail ballots, and legitimize their ballot harvesting methods. They also have the audacity to allocate up to $7.2 million in federal funds to fund political campaigns. In nearby Tarrant, Ellis, and Navarro Counties there was a recent special election that had twenty-three candidates file and run for Congress. Under this Democrat bill the federal government could be on the hook for $161 million dollars in this one special election alone. That is absurd. This money could be used on everything from attack ads to fancy meals and luxury travel expenses.

The very foundation of our Republic stands on free and fair elections, where all Americans inherently trust the outcome regardless if their preferred candidate wins or loses because the process was fair and transparent. Not only am I fighting the Democrats’ plan which would forever end fair elections in America, I am leading the Republican response. Our effort would create a minimum threshold for election security such as voter ID and ban illegal immigrants from participating in any American election.

Twenty five years ago, my first assignment as a Second Lieutenant in the US Marines was on the US-Mexican border. I am one of the only members of Congress to have direct experience on the border. Our crisis on the border is a direct result of Biden stopping President Trump’s policies that were working. As a result, we went from having one of the most secure borders in generations to wide open borders and record high illegal crossings. Biden stopped building the wall, the Remain in Mexico policy, and Title 42 enforcement which allowed border control agents to immediately expel those who entered our country illegally. I have cosponsored efforts to reinstate each of these three successful Trump policies. I have led on legislation which would prohibit sanctuary policies, require compliance with ICE detainers, protect law enforcement officers, and increase prison sentences for illegal re-entry. I coauthored legislation that would designate the drug cartels, who are profiting from human trafficking and creating havoc on our southern border, a terrorist organization.

I have cosponsored a bill to grant conceal carry reciprocity so legal gun owners don’t need to re-register their guns in other states they travel through. I cosponsored legislation which would prevent any President from declaring an emergency in order to impose gun control. For my efforts defending our second amendment freedoms I have earned an A rating from the National Rifle Association, the oldest gun rights organization in the nation, as well as Gun Owners of America.