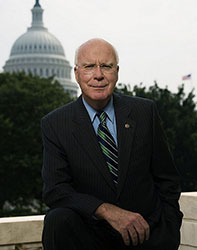 Contact Senator Patrick Leahy (D-VT)
Patrick Joseph Leahy is an American politician serving as the senior United States Senator from Vermont. To date Leahy is the first and only member of the Democratic Party to serve as a U.S. senator for Vermont.

Patrick Leahy was elected to the United States Senate in 1974 and remains the only Democrat elected to this office from Vermont. At 34, he was the youngest U.S. Senator ever to be elected from the Green Mountain State.

Leahy was born in Montpelier and grew up across from the State House. A graduate of Saint Michael’s College in Colchester (1961), he received his Juris Doctor from Georgetown University Law Center (1964). He served for eight years as State’s Attorney in Chittenden County where he gained a national reputation for his law enforcement activities and was selected as one of three outstanding prosecutors in the United States in 1974.

Active on human rights issues, Leahy is the leading U.S. officeholder in the international campaign against the production, export and use of anti-personnel landmines. In 1992, Leahy wrote the first law by any government to ban the export of these weapons. He led efforts in Congress to aid mine victims by creating a special fund in the foreign aid budget, and the Leahy War Victims Fund now provides up to $14 million of relief to these victims each year. He was instrumental in establishing programs to support humanitarian demining and played a key role in pushing for an international treaty banning anti-personnel mines. He also wrote and enacted civilian war victims relief programs in Afghanistan and Iraq.

In the immediate aftermath of the terrorist attacks of September 11, Leahy headed the Senate’s negotiations on the 2001 anti-terrorism bill, the USA PATRIOT Act. He added checks and balances to the bill to protect civil liberties, provisions to triple staffing along the U.S.-Canada border, to authorize domestic preparedness grants to states, and to facilitate the hiring of new FBI translators.

Leahy’s Judiciary Committee investigation into the mass firings of U.S. Attorneys and of White House attempts to exert political influence over the Justice Department led to the resignation of Attorney General Alberto Gonzales and the Department’s entire top rank of political appointees in 2008.

Leahy is the chief sponsor of the Innocence Protection Act, which addresses flaws in the administration of capital punishment. Parts of Leahy’s death penalty reform package, which were enacted in 2004, help reduce the risks that innocent people are executed by providing for post-conviction DNA testing and better access to competent legal counsel.

A leader on Internet and technology issues, Leahy was the second senator to post a homepage. His website consistently has been named one of the Senate’s best, and a leading Internet magazine called Leahy the most “Net-friendly” member of Congress. He has been the Senate’s leading champion of open government and of the Freedom of Information Act (FOIA) and in 1996 was installed in the FOIA Hall of Fame in recognition of his efforts. He is one of only two politicians ever awarded the John Peter Zenger Press Freedom Award. An avid and accomplished photographer, Leahy’s photography has been published in USA TODAY, The New York Times, Time Magazine and Roll Call.

Leahy has crusaded for the protection of privacy rights, copyright protections and freedom of speech on the Internet. He was a co-founder and remains a co-chair of the Congressional Internet Caucus. Leahy has taken the lead on several privacy issues, including drafting legislation to address data and email privacy and security and leading the effort to enact privacy safeguards for electronic health records.

Always ranked among the top environmental legislators by the nation’s foremost conservation organizations, Leahy successfully opposed attempts to allow oil and gas exploration in wildlife refuges in the United States, including the Arctic National Wildlife Refuge in Alaska and the Missisquoi Wildlife Refuge in Vermont. Leahy helped secure more than $70 million in federal funds to clean up Lake Champlain and spearheaded congressional efforts to tackle the dangers of mercury pollution. He worked to add more than 125,000 acres to the Green Mountain National Forest, an accomplishment matched by few lawmakers of any era.

Leahy led bipartisan efforts to streamline the Department of Agriculture, and the 1994 Leahy-Lugar bill reorganized the U.S. Department of Agriculture by closing 1100 offices and saving more than $2 billion. Leahy led the successful effort to extend the Conservation Reserve Program, which assists farmers in meeting environmental objectives without reducing income. Leahy’s Farms for the Future program – now the Farmland Protection Program, which was created in the 1990 Farm Bill – helped preserve more than 350 Vermont farms. He played a crucial role in enactment and implementation of the Northeast Interstate Dairy Compact and also worked with others in the Vermont Congressional Delegation in establishing the Milk Income Loss Compensation (MILC) program, modeled on the Compact. Leahy also is the father of the national organic standards and labeling program, which took effect in October 2002.

Leahy co-chairs the Senate National Guard Caucus and led in ensuring that members of the National Guard in Vermont and across the nation receive the necessary resources to fulfill their heightened missions after 9/11. In 2003 the National Guard Association presented Leahy with its highest individual honor, the Harry S. Truman Award, for his “sustained contributions of exceptional and far-reaching magnitude to the defense and security of the United States in a manner worthy of recognition at the national level.”

Patrick Leahy has been married to Marcelle Pomerleau Leahy since 1962. They have a daughter, two sons, and five grandchildren. The Leahys live on a tree farm in Middlesex, Vermont.