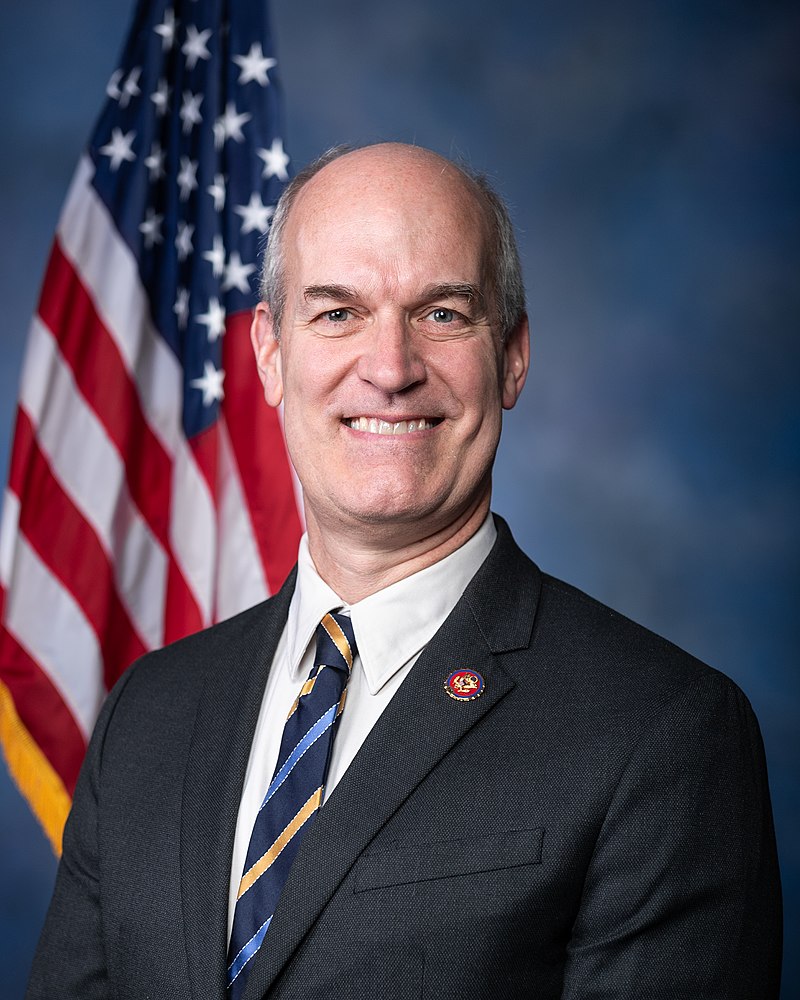 Contact Representative Rick Larsen
Richard Ray Larsen is the United States Representative for Washington's 2nd congressional district and a member of the Democratic Party. He was first elected to the House of Representatives in 2000 and was re-elected in each of the ten subsequent elections, most recently in 2020.

Rick is a senior member of the Transportation and Infrastructure Committee and the Armed Services Committee. On these committees, Rick focuses on creating jobs and opportunities to meet the local needs of Washingtonians.

As a member of the Transportation and Infrastructure Committee, Rick is committed to investing in transportation to create well-paying jobs, drive long-term economic growth and build a cleaner and greener transportation network. Rick will continue to fight for robust investments in roads, bridges, highways, waterways, bike and pedestrian infrastructure, and transit to build a foundation for future economic growth. Rail safety is another priority issue for Rick, and he has worked hard to push for better safety standards for crude oil traveling by rail.

Rick is the Chair, the most senior Democrat, of the Aviation Subcommittee. The Pacific Northwest is the aerospace capital of the world, and the Aviation Subcommittee’s work is critical to jobs and the economy in Washington and the Second District. As Chair, Rick is committed to ensuring aviation safety, fostering innovation in the U.S. airspace, improving U.S. competitiveness in the global market and enhancing the air travel experience for passengers.

The Second District is home to Naval Station Everett and Naval Air Station Whidbey Island, which are vital to the regional economy and national security. As a member of the Armed Services Committee, Rick works to support servicemembers and their families. He is pushing to ensure that women and men in uniform get the pay and benefits they have earned and the equipment they need to keep the U.S. safe. Rick also focuses on ensuring veterans can access the resources and health care they need to succeed in civilian life. Rick worked hard with local veterans to open a community-based outpatient clinic in Mount Vernon to make health care and services more accessible for veterans in the Second District.

Rick is the co-chair of the bipartisan U.S.-China Working Group, which educates Members of Congress about U.S.-China issues through meetings and briefings with academic, business and political leaders from the U.S. and China. Rick has visited China eleven times and is the author of a white paper on developing a comprehensive China strategy and promoting U.S. global competitiveness.

Rick also co-founded the Congressional Arctic Working Group, a bipartisan working group to bring focus to U.S. policy issues related to the Arctic. Rick is a leader on this issue because he is committed to making sure the U.S. lives up to its environmental, economic and strategic commitments as an Arctic nation. Rick is also a member of the NATO Parliamentary Assembly (NATO PA), an organization made up of delegates from all 30 NATO member countries with a mission to engage parliamentarians in transatlantic security issues.

The Larsen family has been building a legacy in the Second Congressional District for more than a century. Rick was born in Arlington, Washington, and attended Arlington Public Schools. Rick and his wife, Tiia, live in Everett and are the proud parents of two sons, Robert and Per.

It is an honor to represent the 2nd District. I am inspired by the strength and resilience of workers, families, students and small business owners across Northwest Washington, whose experiences drive me to fight for an economy that works for everyone, to fight climate change, to increase access to quality, affordable healthcare, to protect reproductive freedom for all women, to protect our children from gun violence, and to take on the special interest and money influencing our politics.

I am committed to helping our families, our small businesses, and our communities fully recover from the pandemic. While Democrats have turned an economy that had lost 20 million jobs into an economy not just on the mend but on the move, with historically low unemployment and stronger growth than China for the first time in nearly five decades, we have still not achieved full recovery – and the pandemic is not over yet.

I supported landmark recovery plans – both from the pandemic and its economic impacts – by voting for the CARES Act, the American Rescue Plan and the Infrastructure Investment and Jobs Act. But our work is not done until everyone has recovered, which is why I will have voted – and will continue to push – for legislative solutions to combat rising costs, including for prescription drugs, childcare, housing, gas, and baby formula, despite the opposition of every Republican in the House. In addition to our ongoing recovery efforts, I remain focused on economic solutions that create jobs and opportunities right here in Northwest Washington, which means protecting and growing manufacturing and maritime jobs, supporting family-run operations in agriculture and aquaculture, and investing in our innovation and our infrastructure.

For many in Northwest Washington, our jobs are not just an occupation, they are a source of dignity and a cultural way of life. That is why, in addition to supporting our local sectors, we must also directly support our local workers, which includes raising the federal minimum wage to $15 per hour, guaranteeing equal pay for equal work, providing skills training across sectors and especially for our youth, and growing the strength of organized labor.

I helped draft and pass the Infrastructure Investment and Jobs Act, which allocates $5.3 billion over five years to provide Washingtonians with more transportation options, ease congestion in local communities, and reduce carbon pollution across the state, in addition to nearly $370 million this year to invest in the state’s transit agencies and communities. And after voting for the Build Back Better plan, which passed the House, I will continue working to advance key elements of the bill, such as the largest effort to combat climate change in American history, which includes landmark investments in the green jobs that will complete the transition to renewable energy.

In Northwest Washington, protecting our natural environment is critical to maintaining a healthy economy and a healthy community. We need clean sources of water and a clean ocean to keep farming and fishing jobs in business. And a transition to renewable energy will start to heal the devastation caused by carbon dioxide emissions. I supported the bipartisan Water Resources Development Act of 2022 and will continue to push for the full passage of the Recovering America’s Wildlife Act.

I believe health care is a right. That is why I am working to expand access to high-quality, affordable health care that fits Northwest Washington families’ budgets. I voted to reduce prescription drug costs by letting Medicare negotiate drug prices, by imposing a tax penalty if drug companies increase their prices faster than inflation, and by capping the price of insulin at $35 per month. I also voted to reduce premiums for 9 million Americans who buy insurance through the Affordable Care Act Marketplace.

I have long been committed to supporting care for our seniors and to strengthening Social Security and Medicare. I voted to close a longstanding coverage gap in Medicaid that locks out 4 million people nationwide, to expand Medicare to cover hearing benefits, and to lower out-of-pockets costs for Medicare Part D beneficiaries. I oppose the privatization of Medicare and have called for stricter accountability for private Medicare Advantage plans. I also oppose the privatization of Social Security and have sponsored “Scrap the Cap” legislation which would no longer exempt income earned above $147,000 from Social Security taxes to strengthen the Social Security fund.

I am outraged by the Supreme Court’s decision to overturn Roe v. Wade. This decision radically constrains reproductive freedom in frightening and dangerous ways; in 26 states and counting, automatic trigger laws turned abortion from a legal practice to a criminalized act in an instant. This backwards decision also strikes a blow to our basic constitutional rights of liberty, privacy, and equality – which is why the American people overwhelmingly oppose it.

Washington is one of 16 states with laws that protect abortion rights, and Gov. Jay Inslee has said he will seek to expand protections for those from out of state and to enshrine reproductive rights in our state constitution. After all, Republican leaders have promised that they will seek a nationwide abortion ban if they take over Congress in November.

As a member of Congress with a 100% voting record on choice, endorsed many times by Planned Parenthood, I will fight hard to codify abortion rights nationwide in federal law. Last fall, I joined a majority in the House to pass the Women’s Health Protection Act, which would do exactly that. But it is currently being blocked by Republicans in the Senate.

My colleagues in the House and I will encourage Senate Democrats to keep making the case with the few Republicans who support Roe v. Wade that a temporary suspension of the filibuster to protect reproductive freedom is practical, precedented, and urgently necessary.

From Columbine to Sandy Hook to Parkland to Uvalde, and far too many others, our classrooms have become the scene of incomprehensible devastation too many times, as have our theaters, our concerts, our grocery stores – even our places of worship. After Uvalde, enough was finally enough. This June, I supported, and Congress passed, the Bipartisan Safer Communities Act, the first major legislation on gun safety since 1994. The bill contained a set of reforms that are both meaningful enough to make a difference but modest enough overcome the filibuster. It enhances background checks for 18- to 21-year-old gun buyers; closes the so-called boyfriend loophole and restricts gun ownership for domestic violence offenders who are not married to their partners; creates financial incentives for states to adopt red-flag laws that allow police or relatives and acquaintances to petition courts to order the removal of a gun if the individual is deemed dangerous; and funds school safety and youth mental health programs. While these reforms, known as the Bipartisan Safer Communities Act, do not go as far as many Democrats – including me – would prefer, they are a step in the right direction, and will save lives. Other sensible, pragmatic steps that Congress can take – which I have voted for and which are supported by strong majorities of Americans – include establishing universal background checks to keep guns out of the hands of criminals; banning large-capacity magazines and bump stocks to reduce the lethality of weapons; require safe storage to keep guns out of the hands of children; and raising the legal age for buying semiautomatic rifles to 21, which would have prevented the shootings in Buffalo and Uvalde.