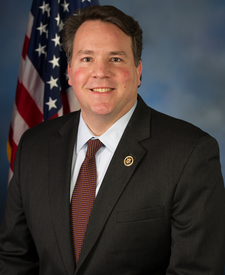 The son of a Cuban refugee and Vietnam veteran, Alex grew up with a deep sense of appreciation for the American ideals of individual freedom and personal responsibility.

Defined by the American Dream

Alex’s mother, Lala, was born and raised in Fidel Castro’s Cuba, where she and several other members of her family were thrown into jail for seven weeks because they opposed Fidel Castro’s communistic regime. When she was 20 years old, Lala escaped Cuba and fled to the United States with barely a penny to her name.

Alex’s father, Vincent, was deployed to Vietnam when his wife was pregnant with their first child. He served as an Engineering Captain and was awarded the Bronze Star. Listening to his parents’ inspiring stories, Alex knew from a young age that he wanted to spend his life fighting for the American ideals set forth by our Founding Fathers.

Elected to serve West Virginia’s second congressional district in November 2014, Alex works to protect West Virginia conservative values, ensuring that our state continues to be a wonderful place to raise a family.

Congressman Alex Mooney and his wife, Grace, live in Charles Town in Jefferson County with their three children, Lucas, Cami, and Gabrielle. Their youngest, Gabrielle, was born in Charleston, West Virginia.

Congressman Mooney understands the important role that firearms play in protecting our freedom, our family, and our property. The Second Amendment is a vital part of our Bill of Rights and Congressman Mooney joined in a successful effort to stop the Bureau of Alcohol, Tobacco and Firearms from banning certain ammunition used for hunting and other purposes.

Congressman Mooney joined Congressman Steve Scalise of Louisiana in introducing the Firearms Interstate Commerce Reform Act (H.R. 2246). Our bill eases an unreasonable burden mistakenly placed upon the men and women of our armed forces, while streamlining a patchwork of incredibly confusing and antiquated regulations for law-abiding gun owners across the nation. Our bill also allows members of the Armed forces and their spouses to purchase firearms as residents of their state of legal residence or the state in which their permanent duty station is located.

Supporting the bipartisan Sportsmen’s Heritage and Recreational Enhancement Act H.R. 2406 (SHARE Act). This act would keep the federal government from outlawing or regulating use of lead ammunition or fishing tackle. Studies show that lead ammunition in the ground has no impact on wildlife.

With a Democrat-controlled White House, we must fight to make sure that Congress a citadel of protection for our gun rights.

Congressman Mooney listens to his constituents and works with others leading the fight against West Virginia’s drug epidemic. He has heard from law enforcement, doctors, community leaders, and recovering addicts throughout West Virginia. Congressman Mooney also joined Charleston police officers on a “ride along” to observe the fight against drug dealers.

Finally, Congressman Mooney will never forget the drug epidemic’s most vulnerable victims, the unborn. He cosponsored The Protecting Our Infants Act (H.R. 1462), a bill that will protect children from the ravages of drugs, even in uteri. This legislation will support efforts to collect and disseminate strategies and best practices to prevent and treat maternal opioid use and abuse, as well as provide recommendations for diagnosing and treating babies suffering from withdraw.

Congressman Mooney fights for our seniors by cosponsoring legislation that would end the double taxation of Social Security benefits, keeping more money in seniors’ pockets. He also signed a letter protecting Medicare Advantage from cuts by the Obama Administration.

Congressman Mooney understands the need to protect Social Security, which is on track to be insolvent by 2035, resulting in an estimated twenty-five percent decrease in benefits for recipients. Congress must act to ensure Social Security never gets to that point. Social Security is a critical support for our seniors who have spent their lives paying into the system.

Congressman Mooney is committed to working together in a bipartisan fashion to accomplish reforms to our critical Medicare and Social Security programs. By doing so, we can prevent future program insolvency, or emergency tax and spending increases to fully fund these programs.

As the son of a Vietnam War veteran, Congressman Alex Mooney will always prioritize the health and well-being of our service members, veterans, and their families. Since taking office he has helped the House of Representatives pass more than 26 veterans-related pieces of legislation aimed at improving Veterans Affairs (VA) and other services, increasing economic opportunity, and honoring our veterans.

Congressman Mooney cosponsored H.R. 577, which will assist veterans that live in rural areas. This legislation will allow veterans living more than 40 miles from the nearest VA facility to obtain quality healthcare at local facilities. Congressman Mooney also cosponsored legislation (H.R. 2114) that would extend coverage and benefits to additional Vietnam veterans who had been exposed to “Agent Orange.”

Congressman Mooney believes in instituting a comprehensive process at the VA for handling complaints by whistleblowers and increasing efficiency. That’s why he supported a bipartisan effort to pass the VA Accountability Act (H.R. 1994).

Congressman Mooney voted for the Fixing America’s Surface Transportation Act of 2015 (H.R. 22) which reauthorized the federal highway program for five years without raising the federal gas tax. Under this bill, West Virginia will receive $2.6 billion for road projects and plan ahead for the next five years.

To ensure that West Virginia’s railroads are safe and reliable, Congressman Mooney cosponsored the Positive Train Control Enforcement and Implementation Act (H.R. 3651), which will see that the latest technology is applied to freight cars to ensure that the communities surrounding train tracks are protected.

To ensure that general aviation pilots are able to keep their licenses without unneeded bureaucratic regulation intervening, Congressman Mooney cosponsored the Pilots Bill of Rights (H.R. 1062).

Congressman Mooney understands that West Virginia needs to fight the EPA and its job killing agenda, while creating reliable infrastructure and transportation for our state to have prosperous coal, oil, and natural gas industries. He also believes in the innovators of tomorrow. That’s why he cosponsored and passed the American Research and Competitiveness. This bill will cut the number of taxes that America’s innovators pay by making the Research and Development tax credit permanent. To put this in context, if a company spends $5 million in research they would be eligible to qualify for a $500,00 tax credit, allowing them to hire 10 new employees at $50,000 per year.

After touring numerous manufacturing businesses in West Virginia, including the South Branch Plant of American Woodmark in Hardy County and Appalachian Timber Services in Braxton County, Congressman Mooney understands the potential growth in these industries. He is devoted to assisting these industries by cutting federal red tape regulations and pointing out tax credits that would prove to be beneficial.

Congressman Mooney introduced the Supporting Transparent Regulatory and Environmental Actions in Mining Act (STREAM Act), preventing the Obama Administration from implementing a new regulation intentionally designed to shut down mining in the Appalachian region and kill as many as 80,000 coal jobs. His bill, H.R.1644, passed the full House on January 19, 2016 with a bipartisan vote of 235-188.

Congressman Mooney understands the importance of ensuring that coal miners and their families receive the care that they need. That is why he is an original cosponsor of the Coal Healthcare and Pensions Act of 2015. This legislation includes ensuring that black lung benefit claims are handled quickly and that miners who are suffering from black lung are given the care that they need.

Congressman Mooney helped lead the fight against President Obama’s devastating Clean Power Plan, which would have dismantled West Virginia’s economy and the coal industry, while raising energy prices on working families. He cosponsored Congressional Resolutions of disapproval for the new power plant rules in the Clean Power Plan that were vetoed by President Obama.

With the spectacular growth of West Virginia’s natural gas industry has come additional burdensome regulations from the EPA and other regulatory bodies. Congressman Mooney continues to fight against over regulation in the energy industry.

He cosponsored the Defund Planned Parenthood Act of 2015 (H.R. 3134) which passed the House by a vote of 241-187. This bill prohibits taxpayer funding of Planned Parenthood for a year, until a Congressional investigation into their gruesome abortion practices can be completed.

Congressman Mooney also cosponsored the No Taxpayer Funding for Abortion and Abortion Full Disclosure Act of 2015 (H.R. 7) which ensures tax dollars are not used to fund abortions and requires Obamacare to offer insurance plans that do not mandate abortion coverage. With a bipartisan vote, this legislation passed the House by a vote of 242-179.