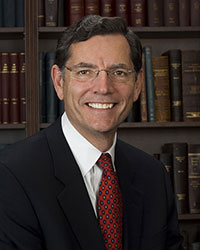 Know more about Senator John Barrasso (R-WY)
John Anthony Barrasso III is an American physician and politician serving as the junior United States Senator from Wyoming. A member of the Republican Party, he previously served in the Wyoming State Senate.

Senator John Barrasso (R) is an American physician and politician. He has been serving as a senior U.S. Senator from Wyoming under the Democrats since 2008. He also served as a member of the Wyoming State Senate from 2002 to 2007.

Barrasso was born in Reading, Pennsylvania, on July 21, 1952. He graduated from Central Catholic High School in 1970. He enrolled at the Rensselaer Polytechnic Institute and studied for two years. He later transferred to Georgetown University, where he earned a B.Sc degree in Biology in 1974.

He received his M.D. Degree from the Georgetown University School of Medicine in 1978. He did his residency at Yale Medical School. After completing his residency, Barrasso moved to Wyoming in 1983. He started private practice in Casper. He also served as the chief of staff of Wyoming Medical Center.

He became the State President of Wyoming Medical Society. He also served as the President of the National Association of Physician Broadcasters.

During his medical career, Barrasso also worked as a rodeo physician. He also volunteered as a team physician for colleges and high schools. He was certified as an orthopedic surgeon till 2007.

Barrasso started his political career as a Republican nominee for a seat at the U.S. Senate in 1996. He looked to occupy the Senate seat after Republican incumbent Alan Simpson vacated the seat. But he narrowly loses the election to his opponent.

But he got a seat at the U.S. Senate a year after his reelection to the Wyoming Senate. Gov. Freudenthal appointed him to replace Senator Craig after his death. In 2008, Barrasso won a special election to serve Craig’s remaining terms. He was reelected in 2012 and 2018.

Barrasso introduced legislation that would enhance the agricultural sector of his state. To boost the economic status of his state, Barrasso has focused on the creation of jobs and the support of businesses. He is also an avid advocate of energy production and preservation.

As a medical doctor, Barrasso has focused on providing quality and affordable medical care. His administration also fostered the freedom of healthcare choices. He also worked on repealing strict government healthcare policies.

To boost the state’s economy, Barrasso has worked on public land preservation. He has also worked to improve national parks and aid tourism. He also supported tax cuts and limits on excessive government spending.

Senator Barrasso has faced criticism over campaign fund misconduct. He allegedly received campaign donations from companies that are facing regulatory scrutiny. Senator Barrasso was also condemned for his efforts to bury evidence against Trump. He was criticized for dismissing evidence after complaining about the lack of evidence.

Barrasso was condemned for opposing healthcare programs for his state on the ground of party interest against President Biden. The programs include a $1.2 trillion infrastructure bill and a $3.5 trillion reconciliation bill for child care.

The bill also covers climate change and child tax credit. Barrasso has voted against both bills.

According to OpenSecrets, Senator John Barrasso’s estimated net worth is $8.3 million. With this figure, he is one of the richest U.S.U.S. Senator.

Senator Barrasso is a conservative politician renowned for his legislative accomplishments. His administration has always fostered the development of Wyoming’s economy. He has also worked towards environmental, infrastructure, and energy development.

But, Barrasso was condemned for campaign misconduct. He was also criticized for burying and dismissing evidence against Trump. Also, he was criticized for putting his party interest against President Biden before the interest of his constituency.