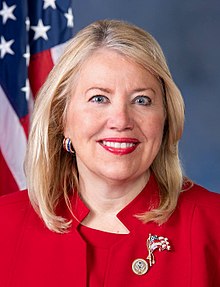 Contact Representative woman Debbie Lesko
Debra Kay Lesko is an American politician and a Republican member of the United States House of Representatives, representing Arizona's 8th congressional district. The district is located in the West Valley portion of the Valley of the Sun and includes Glendale, Surprise, Sun City, Peoria, and part of western Phoenix.

Congresswoman Debbie Lesko represents Arizona’s 8th Congressional District. In May 2018, she was sworn in to the U.S. House of Representatives after winning a special election and was recently reelected for her second full term. For the 117th Congress, Congresswoman Lesko serves on the prestigious House Committee on Energy and Commerce where she serves on the Subcommittee on Energy and the Subcommittee on Consumer Protection and Commerce.

For the 116th Congress, Congresswoman Lesko served on the House Judiciary, House Rules, and House Homeland Security Committees. She also served as a Co-Chair of the Congressional Caucus for Women’s Issues.

In Congress, Congresswoman Lesko has received multiple awards and honors, including being named a 2019 Citizens Against Government Waste Taxpayer Super Hero and receiving the 2020 U.S. Chamber of Commerce’s Spirit of Enterprise Award and National Federation of Independent Business’ Guardian of Small Business Award. She has been a strong advocate for small businesses and for fiscal responsibility in Congress.

Prior to her role in the U.S. House of Representatives, Congresswoman Lesko served in the Arizona Legislature for nine years – the last three of which were in the Arizona Senate. She served as Senate President Pro-Tempore and Chairman of the Senate Appropriations Committee. She was honored by numerous organizations during her time at the Arizona Legislature, including, “Champion of the Taxpayer,” “Guardian of Small Business,” and “Senator of the Year.”

Congresswoman Lesko received her Bachelor’s degree from the University of Wisconsin. She lives in Peoria with her husband, Joe, and they have three children.