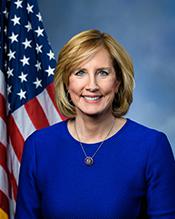 Claudia Tenney was first elected to serve as a member of the United States House of Representatives on November 8, 2016, after winning one of the most expensive races in the nation. As a freshman member of the 115th Congress, she served on the House Financial Services Committee.

Claudia was elected to the House of Representatives for a second time in November 2020, in what was yet again among the most expensive and competitive congressional races in the country.

Prior to her election in November 2016, Claudia served as a member of the New York State Assembly. She was first elected to the Assembly on November 2, 2010.

Claudia is an accomplished attorney and longtime small business owner. Claudia was the co-owner and legal counsel to Mid-York Press, Inc., a commercial printing and manufacturing firm started by her grandfather in 1946. Mid-York Press currently employs nearly 70 people in the Chenango County community of Sherburne. Claudia also maintained a private law practice in Clinton, New York.

Claudia graduated from Colgate University and the Taft College of Law at the University of Cincinnati. She is admitted to the bar in New York, Connecticut and Florida. She also is admitted to all federal courts including the United States Supreme Court. Prior to opening her private practice, Claudia was a partner in the Utica-area law firm of Groben, Gilroy, Oster and Saunders.

In 1997, Claudia established Tenney Media Group and served as its publisher and corporate counsel. Tenney Media Group, also based in Clinton, published and printed free community newspapers founded by Claudia’s parents and grandparents — the Mid-York Weekly and the Pennysaver. These publications covered three Central New York counties with eight separate weekly editions and had a circulation exceeding 100,000 households. This division was sold to Gannett in 2004.

Apart from the influence of Claudia’s family and her legal training, Claudia’s approach to public service has been shaped by experiences beyond politics. Claudia was the only American employed by the Consulate General of Yugoslavia, which led to her strong relationship with the large Bosnian refugee population in the Utica area. She also published and produced the first Bosnian newspaper in Utica. Claudia remains an active member of her community, serving on numerous boards and volunteer organizations throughout the district.

Claudia is the daughter of the late Honorable John R. Tenney, who served as a Justice of the Supreme Court of New York in the Fifth Judicial District from 1969 through 2003, and the mother of U.S. Naval Academy graduate Trey Cleary, who serves as a 1st Lieutenant in the U.S. Marine Corps.