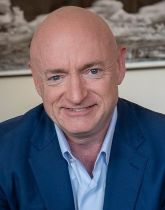 Mark Kelly has served his country as a U.S. Navy combat pilot, a NASA astronaut, and now as a U.S. Senator for Arizona. He is an independent leader who came to the Senate to serve Arizona’s working families, not corporate special interests.

As the son of two police officers, Senator Kelly learned the value of public service at an early age. He attended public schools from elementary school all the way through graduate school. Senator Kelly earned his B.S. degree in marine engineering and nautical science from the U.S. Merchant Marine Academy and later an M.S. degree in aeronautical engineering from the U.S. Naval Postgraduate School.

Watching my mom break barriers to become one of the first women police officers in our town taught me a lot about facing challenges head on to achieve your goals. I continue to be inspired by her.

As a Navy pilot, he made multiple deployments on the aircraft carrier USS Midway and flew 39 combat missions in Operation Desert Storm. Senator Kelly is the recipient of the Defense Superior Service Medal, Legion of Merit, two Distinguished Flying Crosses, and multiple Air Medals.

He has logged more than 5,000 flight hours in more than 50 different aircraft and has over 375 carrier landings. Senator Kelly retired from the Navy with the rank of Captain.

When I was 16, it was hard to believe that I would reach my dreams to become a Navy pilot and NASA astronaut. That’s why I am working to ensure every Arizonan gets a chance to achieve their own dreams.

In 1996, he was selected as an astronaut in the same NASA class as his identical twin brother Scott. Senator Kelly’s first of four trips into space was as pilot of STS-108 in December 2001, during which he helped deliver equipment, supplies, and additional crew members to the International Space Station.

All in all, Senator Kelly has spent more than 50 days in space — traveling over 20 million miles. He retired from NASA in 2011 after commanding Space Shuttle Endeavour on its final flight.

When you’re looking down from space at Earth, it really puts it into perspective that we’re all in this together.

Now, Senator Kelly has embarked on his next mission — serving as a U.S. Senator for Arizona, in the seat once held by Senator John McCain. After being sworn in on December 2, 2020, Senator Kelly went right to work helping Arizona get through the COVID-19 pandemic. He helped pass the American Rescue Plan, which put shots in arms and direct relief in the pockets of Arizonans. The Community Navigator Program, which Senator Kelly championed in the American Rescue Plan, is helping Arizona’s small businesses access the resources they need to keep their doors open and save local jobs.

Senator Kelly has broken through Washington gridlock to deliver real results for Arizonans. In his first year, he played a key role in shaping and passing the historic bipartisan infrastructure law, which is improving Arizona’s roads, bridges, water systems, ports of entry, high-speed internet access, wildfire response, and much more.

He’s taking on Washington corruption by introducing bold proposals to ban stock trading by members of Congress and put an end to corporate PACs.

Senator Kelly has also introduced a resolution that would require all members of Congress to publicly post their official schedule online. He is leading the effort to bring more transparency and accountability to Washington. Senator Kelly also worked on a bipartisan basis to secure the Senate passage of a $52 billion deal that’ll increase domestic microchip manufacturing to create high-paying Arizona jobs, strengthen supply chains to lower costs, and bolster national security. Additionally, he helped negotiate a landmark deal to drive down prescription drug prices and lower out-of-pocket costs for seniors.

Whether it was in the Navy or at NASA, we were all about teamwork and accomplishing the mission. That’s how it should be in Washington, too.

Senator Kelly’s focus remains on working with both Republicans and Democrats to create good-paying jobs, cut taxes for middle-class families, and lower costs for Arizonans.

Senator Kelly serves on the Armed Services, Environment and Public Works, Energy and Natural Resources, Aging, and Joint Economic Committees. He is Chair of the Emerging Threats and Capabilities Subcommittee of the Senate Armed Services Committee, where he focuses on making sure the U.S. has the research and technology needed to outcompete our adversaries like China.

Senator Kelly is married to former Congresswoman Gabby Giffords and they live in Tucson.

I thought I knew a lot about public service. Then, I met Gabby, and she taught me how to use policy to improve people’s lives.

Senator Kelly has two daughters: Claire, a graduate of Arizona State University, and Claudia, who lives in Tucson and is a student at the University of Arizona. His favorite hobbies include spending time with family (especially his baby granddaughter Sage!), going to the gym, riding his bike around Tucson with Gabby, hiking, and exploring Arizona’s outdoors.