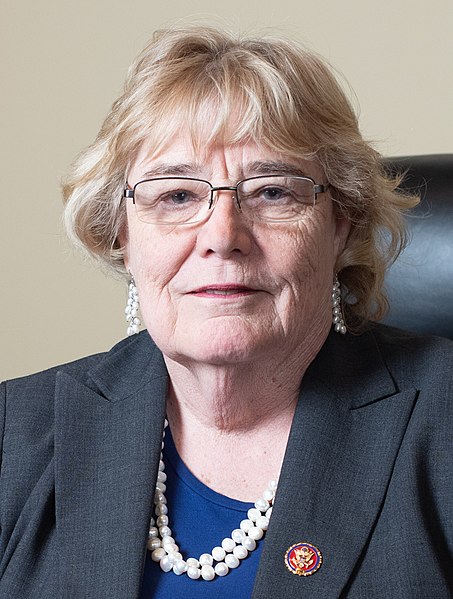 Contact RepresentativeZoe Lofgren
Susan Ellen "Zoe" Lofgren is an American politician serving as a U.S. Representative from California. A member of the Democratic Party, Lofgren is in her 13th term as a congresswoman, having been first elected in 1994.

Zoe Lofgren has been a Democratic member of the United States House of Representatives since 1995. She represents the 19th District of California, based in the “Capital of Silicon Valley,” San Jose, and the Santa Clara Valley.

A lifelong Bay Area resident and the daughter of a truck driver and a cafeteria cook, Zoe attended public schools and attended Stanford University on a California State Scholarship, graduating with a bachelor’s degree in political science in 1970. Prior to attending Stanford, Lofgren worked the night shift at the Eastman Kodak plant in Palo Alto to save money for non-tuition college expenses not covered by her scholarship. After graduating from Stanford, she attended, with the help of a scholarship, Santa Clara University School of Law, graduating cum laude in 1975. She served as a member of Congressman Don Edwards’ staff for eight years in both his San Jose and Washington DC offices. While practicing and teaching immigration law, she was first elected to the San Jose Evergreen Community College Board in 1979. In 1980, she was elected to the Santa Clara County Board of Supervisors where she served for 14 years. Following Congressman Don Edwards’ retirement in 1994 after 32 years in Congress, Zoe was elected to the House of Representatives. She currently serves on the House Judiciary Committee, the House Science, Space and Technology Committee, and the Committee on House Administration. As the Chair of the Subcommittee on Immigration and Citizenship, and a former immigration attorney and immigration law professor, Zoe is recognized as an established champion of top-to-bottom immigration reform and a national leader in immigration policy. During the 113th Congress she played a key role in negotiating a comprehensive reform bill in the House Representatives as part of an eight-person bipartisan working group.

In 2010, in part due to her work on the Development, Relief and Education for Alien Minors (DREAM) Act, then-Speaker Nancy Pelosi presented Zoe with the gavel used to preside over the passage of the bill in the House of Representatives.

Zoe is known for her work on patent reform, copyright issues, digital rights, and net neutrality. She successfully fought to initiate the “e-rate” that provides affordable internet access for schools, libraries, and rural health centers, and she is the author of legislation that would allow the unlocking of cellular phones and other digital devices to give owners more control over their devices. She led a bipartisan effort in the House to decontrol encryption technology.

A staunch advocate for digital rights, Zoe was the lead early opponent of the Stop Online Piracy Act (SOPA) and led a successful fight to stop the bill in the House Judiciary Committee. Her Online Communications and Geolocation Protection Act would require law enforcement to obtain a warrant before retrieving communications and documents stored remotely or geolocation information about an individual.

In 2014, Zoe led a bipartisan effort to close backdoor loopholes on unwarranted government surveillance. The Massie-Lofgren amendment to the 2015 Department of Defense Appropriations Act to stop the NSA from searching Americans’ private communications collected without a warrant, and to prohibit the NSA from weakening security protections in devices and software for unwarranted surveillance purposes, passed the House by a resoundingly bipartisan vote of 293 to 123.

In 2019, Zoe was appointed Chairperson of the Committee on House Administration by Speaker Nancy Pelosi and confirmed unanimously by the House Democratic Caucus. The Committee on House Administration (CHA) was established in 1947 as part of a larger effort to streamline the U.S. House of Representatives’ committee system and to modernize its internal management and operations. After more than 70 years since the committee was established, CHA’s two principal functions include oversight of federal elections and day-to-day operations in the House. Historically, the committee has had a hand in shaping legislation that touches on any and all aspects of federal elections. Issues concerning corrupt practices, contested congressional elections, campaign finance disclosures, and credentials and qualifications of House Members also fall under its purview. Additionally, she is a member of the Select Committee on the Modernization of Congress, formed to make Congress more transparent, unifying and responsive to the needs and aspirations of the American people.

Zoe is also the Chair of the California Democratic Congressional Delegation. It is the most diverse delegation in the House and outnumbers all other state House delegations.

Zoe is married to John Marshall Collins and is the mother of two.