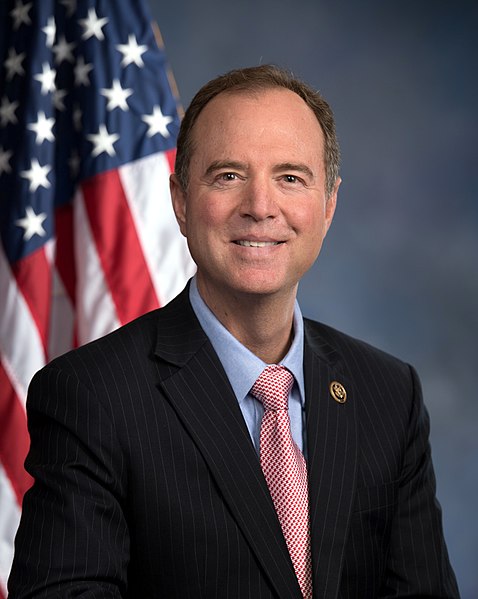 Here you will find contact information for congress Adam B. Schiff, including email address, phone number, and mailing address.

Contact Representative Adam B. Schiff
Adam Bennett Schiff is an American lawyer and politician who has served as the U.S. Representative for California's 28th congressional district since 2013. A member of the Democratic Party, Schiff is currently in his 10th term as a Representative, having served since 2001.

Adam B. Schiff for congress

Schiff was born in Framingham, Massachusetts to Edward and Sherrill Ann (Glovsky) Schiff. His father was in the “rag business,” selling different lines of clothing across the country, which caused the family to move first to Scottsdale, Arizona and then Alamo, California.

Schiff graduated from Danville’s Monte Vista High School in the Bay Area, and went on to both Stanford University and Harvard Law School.

After Schiff graduated from Harvard, he moved to Los Angeles to serve as a law clerk for Judge William Matthew Byrne, Jr. Schiff then joined the U.S. Attorney’s Office in Los Angeles as a federal prosecutor, where he served for almost six years, most notably prosecuting, Richard Miller, the first FBI agent ever to be indicted for spying for Russia.

Adam and his wife, Eve (yes, it’s true - Adam and Eve) have two children, a daughter, Alexa, and a son, Elijah.

Schiff authored dozens of bills that were enacted into law, from guaranteeing up-to-date textbooks in the classroom, overhauling state child support laws, passing a patient’s bill of rights, and guaranteeing cost-of-living increases for teacher pensions. He authored the Schiff-Cárdenas Juvenile Justice Crime Prevention Act of 2000, which provided millions in unprecedented funding to keep at-risk youth out of prison. Perhaps most notably, Schiff is known as the “Father of the Gold Line” for his work to expand Metro rail into the San Gabriel valley, from Pasadena to Azusa, a project that is still ongoing.

In 2000, Schiff was first elected to the U.S. House of Representatives, where he has served ever since. He currently chairs the House Permanent Select Committee on Intelligence, and is on leave from the House Appropriations Committee. He also previously served on both the House Judiciary and Foreign Affairs Committees.

Throughout the COVID-19 pandemic, Rep. Schiff has worked to ensure that individuals, families, and small businesses get the support they need to weather this crisis.

Schiff successfully advocated for the inclusion of the Mixed Earners Pandemic Unemployment Assistance Act in Congressional relief legislation, to ensure that individuals who earn mixed sources of income - including thousands of his constituents who are freelancers, contract workers, in the entertainment industry and gig economy - are not left out of vital unemployment assistance. A firm believer that we must be guided by science, Rep. Schiff also introduced the Masks Work Act to mail free face coverings to any American who requests one and provide funding for further research and a public service announcement campaign on mask efficacy. And to ensure that we are better prepared to face future public health crises, Rep. Schiff introduced a bill to create a 9/11-style commission to review, after the fact, the U.S. government’s response to the coronavirus pandemic and make recommendations for the future.

Schiff is committed to upholding and strengthening our democracy and the rule of law. He led the House impeachment inquiry and served as the Lead Impeachment Manager during the Senate impeachment trial of President Donald J. Trump.

He has worked to harden our defenses against foreign interference in our elections and expose it to the American public. In 2020, he sponsored the Protecting Our Democracy Act, landmark legislation to prevent the abuse of power by any president and to strengthen checks and balances.

Schiff is recognized as a leader on national security and foreign policy issues, emphasizing a strategy that calls on America to play a leadership role around the world in cooperation with our allies, while remaining true to our values and interests. Schiff has advanced efforts to protect the freedom of the press overseas by authorizing the Daniel Pearl Freedom of the Press Act, as well as legislation to prevent the proliferation of nuclear material to terrorist groups. He has also been a longtime advocate to sunset out of date Authorizations to Use Military Force and to refocus America’s counterterrorism mission.

Schiff’s top priority is to create economic opportunity for everyone in our country and community. Schiff has always believed that small businesses are the true engine of growth and he continues to fight to enact tax relief for small businesses, assist them with access to capital, and restore America as a manufacturing powerhouse.

Schiff is a longtime champion of the environment and investments in infrastructure and mass transit. As a State Senator, he wrote the legislation establishing the Gold Line Light Rail Authority, and in Congress has led efforts to extend the light rail and mass transit throughout Los Angeles County. Throughout his time in Congress, Schiff has pushed to preserve and protect the Rim of the Valley Corridor by adding almost 200,000 acres to the Santa Monica Mountains National Recreation Area to protect natural resources and habitats around the Los Angeles basin for generations to come. Schiff’s bill passed the House in February 2020. Schiff has also worked with the local community to protect constituents from increased noise from helicopters and airplanes and to secure funding to help restore the Los Angeles River.

Schiff has also been a leading advocate for equality and human rights at home and around the world. Schiff serves as Vice Chair of the LGBTQ+ Equality Caucus. He has also led efforts in Congress to officially recognize the Armenian Genocide and in 2019 the U.S. Congress passed Schiff’s related resolution with overwhelming bipartisan support, ending decades of shameful silence on the issue.

Schiff represents Hollywood in Congress, and because the entertainment industry is one of the largest job creators in the region and an economic powerhouse, Schiff is a leader on efforts to combat intellectual property theft and digital piracy. He has worked on a bipartisan basis to support copyright protections and crack down on those who would steal the work of U.S. creators for a profit.

Schiff’s district is also home to NASA’s Jet Propulsion Laboratory (JPL) in La Cañada-Flintridge, which has fueled his belief that American leadership in space exploration is a key economic driver in tech and emerging industries. Schiff has fought hard to preserve and expand the robotic missions undertaken by JPL from missions to Mars to a future mission to Jupiter’s moon of Europa. And closer to home, he has partnered with the California Institute of Technology to obtain over $100 million in federal funding for the Earthquake Early Warning system, which can provide Californians a warning prior to the arrival of a destructive earthquake.

As a former federal prosecutor, Schiff has worked to improve public safety and end gun violence, with an emphasis on smart, cost-effective solutions.

Among his accomplishments, he obtained federal funding to create a Foothills Regional DNA Lab in Glendale to speed the processing of DNA evidence in Glendale, Burbank, Pasadena, and other foothill cities and take violent offenders off the street. Schiff introduced the Equal Access to Justice for Victims of Gun Violence Act to ensure the gun industry is not shielded from liability when it acts negligently and victims of gun violence get their day in court. He has also been a leading proponent in Congress for the Justice Reinvestment Initiative, a program that helps states reduce spending on corrections while reinvesting the savings in public safety.