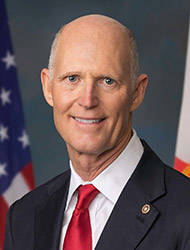 Contact Senator Rick Scott (R-FL)
Richard Lynn Scott is an American politician who is the junior United States Senator from Florida since 2019. A member of the Republican Party, he was the 45th governor of Florida from 2011 to 2019.

Richard Lynn Scott is an American politician, businessman, and venture capitalist. He has been serving as the junior United States Senator from Florida since 2019. Scott was the governor of Florida from 2011 to 2019.

Senator Rick Scott was born in Bloomington, Illinois, on December 1, 1952, as Richard Lynn Myers. He took his step-father’s name after his biological parents divorced. The new family moved to North Kansas City, Missouri, where he attended high school and college.

Senator Rick Scott served two years in the US Navy, after which he attended the University of Missouri–Kansas City. He graduated with a BSc. in Business Administration and earned a law degree from Southern Methodist University. During this time, he acquired a donut shop which marked his foray into business.

Scott holds conservative views. He is a staunch member of the Republican party and beneficiary of the Tea Party movement. As governor, he signed several pro-gun bills into law and is a persistent critic of the Obamacare act.

In 2010, Senator Rick Scott got the Republican nomination to contest for governor of Florida. He won the election to become the 45th governor of the state. He won reelection in 2014 to complete a second four-year tenure.

Senator Rick Scott won a close contest in 2018 to become the junior senator from Florida in the 116th congress. In the 117th congress, he is a member of the Senate committees on Budget, Armed Forces, among others. He became the leader of the National Republican Senatorial Committee in 2021. The group works to elect more Republicans to the senate.

The governor earned plaudits for his handling of Hurricane Irma. People liked that he was proactive and relentless in evacuation and relief efforts

Rick Scott resigned as chairman and CEO of Columbia/HCA in the wake of an FBI investigation. In the end, the company agreed to pay $1.7 billion for defrauding government programs.

That was the largest healthcare fraud settlement at the time. Scott says he was not aware of the fraud. Also, the FBI did not target him in the investigation.