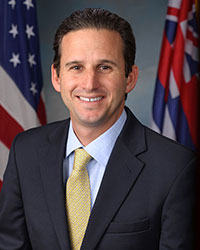 Senator Brian Emmanuel Schatz is an American politician and educator.

He is serving as a senior U.S. Senator from Hawaii under the Democrats since 2012. He was a member of the Hawaii House of Representatives from 1998 till 2006. There, he represented Hawaii’s 25th legislative district. He was also the chairman of Hawaii’s Democratic Party.

Senator Brian Schatz was born as a twin in Ann Arbor, Michigan, on October 20, 1972.

When the Senator Brian Schatz twins were two years old, their family moved to Hawaii. Schatz enrolled at Pomona College in California. He spent a term at the School of International Training in Kenya. He later graduated with a B.A. degree in Philosophy in 1994

In 1998, Schatz ran for a seat at the Hawaii House of Representatives. He defeated Republican incumbent Sam Aiona to win the seat. He won again in 2000 and served till 2006.

In 2006, Schatz ran unsuccessfully for a seat at the U.S. House of Representatives elections in Hawaii. Yet, in 2008, he ran for the position of the chair of Hawaii’s Democratic Party. He won the position and served till 2010.

In 2010, Schatz announced his intention to run for lieutenant governor of Hawaii. Several Hawaii labor unions supported and endorsed him for the position. He subsequently won the election in November 2010.

In 2012, Schatz was appointed to the U.S. Senate by Governor Abercrombie. Incumbent Daniel Inouye vacated the seat before his death. But despite Inuoye’s request for Colleen Hanabusa’s appointment, Abercrombie appointed Schatz. After completing Inuoye’s term, he was elected again in 2014 and 2016

Schatz has championed healthcare, climate change, and technology reform in the state.

He was a leading advocate on combating climate change. He also supported the Green New Deal and a carbon tax to reduce harmful emissions and pollution. He also sponsored the introduction of a proposal to expand Medicaid into a universal system.

Schatz’s administration also worked on adequate and convenient housing for the people of Hawaii. Apart from all these, he also made legislative decisions on foreign policy, national security, and the economy