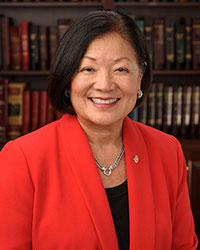 contact senator Mazie Hirono (D-HI)
Mazie Keiko Hirono is an American politician serving since 2013 as the junior United States Senator from Hawaii. She is a member of the Democratic Party. Hirono served as a member of the Hawaii House of Representatives from 1981 to 1995 and as Hawaii's ninth lieutenant governor from 1994 to 2002, under Ben Cayetano.

Senator Mazie Hirono is a Japanese-born American politician and lawyer. She has represented Hawaii as a junior U.S. Senator under the Democrats since 2013.

Hirono was born in Koori, Fukushima city, Japan, on November 3, 1947. She earned her bachelor’s degree in Psychology at the University of Hawaii in 1970. After working for a few years, Hirono earned her J.D. from Georgetown University Law Center in 1978. After her J.D., she returned to Honolulu, where she practiced law

Senator Mazie Hirono started her political career as an antitrust litigation worker for the government of Hawaii. In 1980, Hirono became a Rep for the 12th District at the Hawaii House of Representatives. She redistricted and won the 20th District. After redistricting, she won the 32nd House District in 1984. She also won the 22nd House District from 1992 to 1994.

After retiring from the House of Reps in 1994, Hirono ran for lieutenant governor in 1994 and won. She was reelected in 1998. In 2002, she announced her intention for the post of Honolulu Mayor. But, Hirono switched race after the incumbent mayor resigned her intention to resign. Hirono then ran for the governor of Hawaii but was defeated by Republican Linda Lingle.

After four years, Hirono won a seat at the U.S. House of Representatives after defeating Republican Senator Bob Hogue in 2006. She won again in 2008 and 2010.

In 2011, Hirono announced her interest to represent the Democrats in the U.S. Senate after Daniel Alaska’s retirement in 2012. She defeated Republican Linda Lingle and assumed office in 2013. She won again in 2018.

Hirono has worked fervently in supporting and preserving Hawaii’s prepaid health care law. She supported Medicare for All. She has also teamed up to improve the standard and quality of education, especially early childhood education. She is also an advocate of food and energy sustainability and the tourism industry.

Her administration also fostered security. She participated in the Chris Murphy gun control filibuster while supporting other gun control laws

Despite her several legislative achievements, Senator Hirono has faced criticism about her career. She was accused of covering up sexual harassment at a flight school. An alumnus of the school disclosed the harassment allegations in which Hirono covered up.