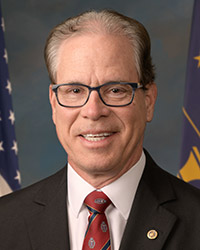 Contact Senator Mike Braun (R-IN)
Michael K. Braun is an American businessman and politician serving as the junior United States senator from Indiana. Previously, he represented the 63rd district in the Indiana House of Representatives from 2014 to 2017.

Senator Michael K. Braun is an American politician and businessman. He has been serving as a junior US Senator from Indiana under the Republicans since 2018. He was a member of the Indiana House of Representatives. He represented the 63rd district from 2014 to 2017.

Braun was born in Jasper, Indiana, on March 24, 1954. He graduated from Jasper High School in 1972 and enrolled at Wabash College. There, he received his Bachelor’s degree in economics. He later earned an MBA at Harvard Business School in 1978.

After his MBA, Senator Mike Braun moved back to Indiana. There, he worked with his father, who manufactures trucks for farmers. But, things changed after an economic depression almost destroyed his father’s business.

Braun switched into a more lucrative business of Truck accessories selling. His business grew and became so popular in the US. In fact, his employees grew from 15 to more than 300.

In the wake of the growth, Braun acquired Meyer Body Inc in 1986. Meyer is a manufacturer and distributor of truck bodies, parts, and equipment.

He became the sole owner in 1995 and renamed Meyer Body to Meyer Distributing afterward. Meyer has grown to become a leader in auto and truck part distribution nationwide. Senator Mike Braun is currently the President and CEO of the multinational company

Braun started his political career as a member of the Jasper High School Board from 2004 to 2014.

He became a member of the Indiana House of Reps, representing District 63 in 2014. He served till 2017, when he resigned to run for a seat at the US Senate. Braun won the primaries and defeated Democratic incumbent Joe Donnelly and other candidates

As a state representative, Braun always looked for ways to serve his state and country. He partnered with conservative leaders like Mike Pence to achieve results for Indianans.

Braun is also an advocate of human rights. But, he opposed the amendment for the ban on discrimination on sexual orientation and gender identity.

Braun also opposed the Affordable Care Act. He even made several efforts to repeal it and supported lawsuits to take it off the whole Act.

On immigration, he emphasized that the first solution to illegal immigration is building walls. He also opposed the Dream Act, which will enable citizenship for undocumented immigrants

Before his election in 2018, Braun was caught in a financial ploy to raise more money for his general election. Although legal, the shady financial ploy involved him using the retiring debt of his primaries to boost his fort-coming campaign.

He played a role in indicting the January 6 2021 insurrection at the US Capitol. He was part of the senators that voted against the certification of the 2020 electoral votes.

He was also criticized for pulling donor support at a fundraiser in Indiana, where he previously tagged ‘Swamp