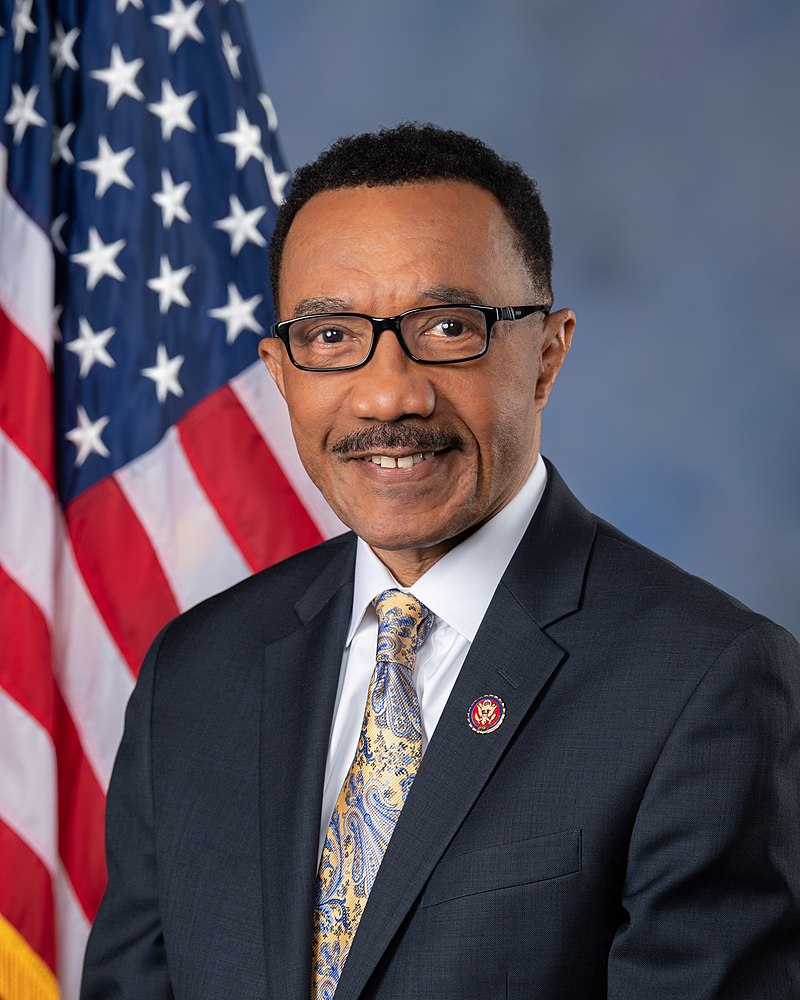 Contact Representative Kweisi Mfume
Kweisi Mfume was born, raised and educated in the city of Baltimore and it was there that he followed his dreams to impact society and to help shape public policy.

Kweisi Mfume was born, raised and educated in the city of Baltimore and it was there that he followed his dreams to impact society and to help shape public policy.

As Mfume’s community involvement grew, so did his experience as an activist, radio commentator, administrator, and TV personality. By the age of thirty-one he had won his first election to the Baltimore City Council.

During his seven years of service in local government, he chaired the City Council’s Committee on Health Policy and led the efforts to diversify city government, improve community safety, enhance business development, and divest city funds from the then-apartheid government of South Africa.

At the age of thirty-eight, he was decisively elected to the United States Congress, a seat he firmly held for the next decade during the terms of Presidents Ronald Reagan, George H.W. Bush, and Bill Clinton.

As a member of the U.S. House of Representatives, Congressman Mfume was active with an array of substantive committees. He served on the Banking and Financial Services Committee where he held the ranking seat on the General Oversight and Investigations Subcommittee. He also served as a member of the Committee on Education and helped to impact commerce and industry matters as a senior member of the Small Business Committee.

Congressman Mfume consistently advocated for landmark business and civil rights legislation. He successfully co-sponsored and helped to pass the Americans with Disabilities Act, strengthened the Equal Credit Opportunity Law, and co-authored and successfully amended the Civil Rights Bill of 1991 to apply its provisions to U.S. citizens working for American-based companies abroad. He also sponsored legislative initiatives banning assault weapons and establishing stalking as a federal crime.

Congressman Mfume served as both Vice-Chair and later Chairman of the Congressional Black Caucus. He was regularly designated to preside as Speaker Pro Tempore of the House of Representatives. During his fifth term in office, he was appointed by the Democratic Caucus as Vice-Chairman for Communications – a role with broad reach and exposure.

Kweisi Mfume left his Congressional seat to become President and Chief Executive Officer of the NAACP in February of 1996 after being unanimously elected to the post and served there for nine years. During that time, he significantly raised the national profile of the NAACP while helping to restore its prominence among the nation’s oldest civil rights organizations.

His efforts to increase the organization’s relevance included pursuing enhanced civil rights enforcement measures within government and in the private sector, economic empowerment for all people, educational excellence and access to affordable healthcare in the most overlooked communities, and establishing 75 new college-based NAACP chapters across the nation.

In 2000 Mfume worked to negotiate, develop, and author the first ever signed “Network Television Diversity Agreements” with NBC, ABC, CBS, and Fox. In 2003, he helped negotiate for and successfully secured the NAACP’s official United Nations’ Status as a Non-Governmental Organization (NGO) within that world body with all of the rights and privileges thereto and pertaining.

American Enterprise Institute and the Brookings Institution following the September 11, 2001 terrorist attacks. The Commission was created to study and recommend reforms related to Presidential and Congressional succession in a time of national catastrophic crisis or in the event of a terrorist attack.

He is formerly a member of the Board of Visitors of the U.S. Naval Academy in Annapolis; People for the American Way; the Meyerhof Scholars Advisory Board of the University of Maryland; the Senior Advisory Committee of the John F. Kennedy School of Government at Harvard University; the African American Advisory Board of PepsiCo; the American Society of Association Executives; the National Advisory Council of Boy Scouts of America; and Big Brothers/Big Sisters of Central Maryland.

In 2010, he completed 12 years of service as a member of the Johns Hopkins University Board of Trustees and has been previously named “Marylander of the Year” by both the Baltimore Sun newspaper and Maryland Magazine.

From 2010 to 2011, he served as Executive Director of the National Medical Association (NMA) founded in 1895 as the nation’s oldest African American Medical Association promoting the collective interests of physicians and patients throughout the U.S.

From 2013 to 2018, Mfume lead an NIH funded team of researchers in developing ways to close the gaps between science and health disparity policies as the Managing Director and Principal Investigator for the Health Policy Research Consortium in Maryland. He also served concurrently as Chief Health Equity Officer and a member of the Board for CTIS (Capital Technologies Information Systems) in Rockville, Maryland. From 2011 until 2020 he served as a member of the Board of Research America and from 2016 to 2020 as its Vice Chairman.

Mfume was sworn in as a member of the 116th Congress on May 5, 2020, after winning a special election to fill the remainder of the term vacated by the death of his friend of 42 years (and successor in Congress) Congressman Elijah Cummings. Mfume subsequently won election to a full term in the 117th Congress. So far, his congressional successes include passing legislation to address the longstanding need for diversity in clinical cancer trials by pharmaceutical companies using federal dollars (the “Henrietta Lacks Enhancing Cancer Research Act”), codified and tripled the budget of the only federal agency tasked with promoting the growth and competitiveness of minority-owned businesses (the Minority Business Development Agency), brought back billions of dollars in COVID-19 relief money to his Maryland District, and helped countless constituents with his constituent services efforts.

Mfume serves as Chairman of the Morgan State University Board of Regents and is a gubernatorial appointee to the Maryland Commission on African American History and Culture. He is a member of the Omega Psi Phi Fraternity, the Gamma Boulé Sigma Pi Phi Fraternity, the Ancient and Accepted Scottish Rite of Freemasonry, 33° Prince Hall Affiliation Southern Jurisdiction of the United States of America, and formerly as an associate in the Association of Former Members of Congress.

For the last two decades, he has lectured at scores of colleges, universities, corporations, medical associations, and bar associations across the country on the subjects of history, politics, diversity, compliance, health policy, disparities in health care, tolerance and the new challenges of gender and race.

His background in broadcasting includes twenty years in radio and television. For three years he hosted the nationally syndicated and NBC/Hearst TV special “The Remarkable Journey.” In 2000, he was on the Entertainment Weekly Magazine annual list of the “101 Most Powerful People in Entertainment.” While a member of Congress he was the recipient of the NAACP Image Award for national leadership and later the 2005 Telly Award for the Television documentary “Ticket to Freedom.” Oratorically, he has twice performed in concert with opera soprano Kathleen Battle, and the Baltimore Symphony Orchestra.

He has been featured on 60 Minutes and has made guest appearances on the ABC This Week Program, The Today Show, Good Morning America, Meet the Press, The O’Reilly Factor, Hardball, Nightline with Ted Koppel and countless other news and public affairs programs. He remains a constant advocate for bi-partisan political cooperation on social, economic, educational and healthcare issues.

He has been honored with scores of other awards, proclamations and citations. His former bestselling autobiography published by Ballantine Books (Random House) New York, New York is entitled “No Free Ride.”