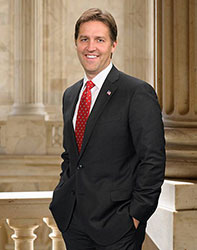 Contact Senator Ben Sasse (R-NE)
Benjamin Eric Sasse is an American politician serving as the junior United States Senator for Nebraska since 2015. He is a member of the Republican Party.

Senator Benjamin Eric Sasse is an American politician. He has been serving as a junior U.S. senator for Nebraska under the Republicans since 2015.

Senator Ben Sasse was born in Plainview, Nebraska, on February 22, 1972. He graduated from Fremont Senior High School in 1990. He enrolled at Harvard University and earned a Bachelor’s degree in Government. He also studied at the University of Oxford in 1992 before his Bachelor’s degree.

He later received a Master of Arts degree from St. John’s College in 1998. He also earned a Master’s and Doctoral degrees at Yale University.

Sasse also served as counselor to the Secretary at the Department of Health and Human Services in Washington, D.C., from 2006-2007.

Senator Ben Sasse was appointed as assistant secretary for planning and evaluation in the Department of Health and Human Services. He served till the end of the Bush administration.

He became the president of Midland university from 2009-2014. He stepped down as the president to contest for a seat in the U.S. Senate.

In 2013, Republican incumbent Mike Johanns announced he would not be seeking reelection in the Senate. Fischer subsequently confirmed his candidacy for the vacant seat. He won the Republican nomination and won the general election in 2014. He took office in 2015 and was reelected in 2020.

He has worked with private equity firms and non-profit organizations to tackle failure in sectors and grow the state and national economy. Sasse is focused on creating jobs and helping the nation’s debt crisis.

Sasse is an environmental protection advocate. He has worked to offer innovative and constructive solutions for the climatic crisis.

While Sasse was in Texas, he supported the plan to reduce the cost of health care. He also worked as a counselor to the Secretary at the U.S. Department of Health and Human Services. He advised the Secretary on health issues, from access to health care issues to food safety and security

Sasse was called out for blaming China for the pandemic. He made that known while addressing the graduating class of 2020 at Fremont High school. But not everyone agreed.

He was also part of the Senators that wrote a controversial warning letter to the Iranian government. The letter warned Iran against signing a nuclear deal with the U.S. government. But the letter attracted backlashes from the President and Congress