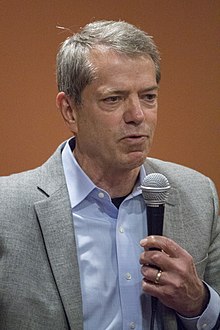 Governor Jim Pillen was sworn in as Nebraska’s 41st Governor on January 5, 2023.

He enters office with the goal of protecting, training, and keeping our kids in Nebraska, cutting taxes, growing agriculture, and defending our commonsense, conservative values.

Governor Pillen grew up on a farm in Platte County, Nebraska and raised pigs with his father, Dale. He graduated from Lakeview High School.

He earned a Bachelor’s Degree in Animal Science from UNL, and married Suzanne Shreve. Governor Pillen then earned a doctor of veterinary medicine from Kansas State. In 1983, he returned to Nebraska and opened a small animal practice and swine consulting practice.

Governor Pillen and his father, Dale, partnered together, raising 60 sows and 1,200 market hogs on a dirt lot on their home farm. In 1993, Jim started Pillen Family Farms. In 2003, he added DNA Genetics. In 2010, his two oldest children, Sarah and Brock, joined the business.

Pillen Family Farms and DNA Genetics are now a multigenerational family-run business, composed of over 1,100 team members. The family business operates by some basic core beliefs—do what is right, do the best you can, and treat others the way you want to be treated.

My parents insisted that education would open doors for our future. They sacrificed so we would have the opportunity to pursue our dreams. One of the reasons I am running for governor is to give every child the chance to pursue their dreams right here in Nebraska.

I am fully committed to K-12 education in Nebraska. Our schools must prepare our kids to compete in a global workforce. I support options for parents and making sure our students have a pathway to a great job in Nebraska’s workforce upon graduation. That could mean learning a trade or getting a degree at NU or one of our great state or private colleges.

Nebraska schools should continue to reflect commonsense Nebraska values. Suzanne and I have gone to great lengths over the years to protect our kids and raise them with the values Nebraskans cherish. Our mission in education is to prepare our children for the future, not introduce political ideology. As the parent of a high school junior, I join thousands of Nebraska parents in opposing the proposed State Board of Education “health standards,” which sexualize students and supplant parental values with a radical view. I will continue to stand with Nebraska parents and families against attempts to inject anti-American ideology, like the “1619 project” and “critical race theory,” into Nebraska classrooms.

WHEREAS, all campuses and facilities of the University of Nebraska system are places for open reflection, discussion, study, research, and learning; and

WHEREAS, America is the best country in the world and anyone can achieve the American Dream here; and

WHEREAS, education, free speech, and sound learning are the keys to freedom and opportunity in this country; and

WHEREAS, we oppose discrimination in any form in the classroom, on campus, and in our communities, and we support the safety and wellbeing of all students, faculty, and staff; and

WHEREAS, Critical Race Theory does not promote inclusive and honest dialogue and education on campus; and

I am proudly prolife. I believe life begins at conception and that Nebraska should advance a culture of life and protect the unborn. I am committed to protecting Nebraska’s most vulnerable. I oppose taxpayer money funding organizations that commit abortions, and support adoption options for mothers and families in crisis.

Nebraska is at a growth crossroads. We have an exciting opportunity to grow our state, our tax base and the opportunities for future generations. To harness our potential, we have to invest in statewide infrastructure. That means expanding broadband access to every corner of our state and improving roads in every direction.

As Governor, I will always defend your right to keep and bear arms. I support the constitutional right of every law-abiding citizen to defend themselves, and their families. That right shall not be infringed upon, period. Gun control measures pushed by the left falsely assume criminals will obey gun laws. The radical left will never be satisfied with an assault weapons ban, they are already advocating gun confiscation. I oppose their gun-grabbing agenda, even when it is put forward by a different name, like “red-flag law.” We should never give anyone the right to suspend our Second Amendment rights.

I will stand with law enforcement and safeguard our communities. Calls to defund the police are reckless and dangerous. Police officers, Sheriffs, the State Patrol, firefighters, and first responders put their lives on the line for us everyday and they deserve our respect and support.

We must demand order on the southern border. We are decades into the federal government not enforcing our laws and refusing to deal with immigration reform. It is simply inexcusable. The result is state and local governments are forced to deal with the resulting issues like education, healthcare, workforce and law enforcement. More importantly, the failure to reform and enforce an immigration policy creates a national security threat at every entry point to the U.S., and exploits the vulnerable like we are seeing right now with Biden’s border crisis.

####c Government Spending There is no room for wasteful government spending when I am Governor. I fundamentally believe that people should keep more of the money they earn, and that the government isn’t the answer to every problem. I know how hard families, farmers and small business owners work for every dollar they earn—and the government shouldn’t take a single cent more than is needed.

The assault on modern agriculture has never been more evident than it is now. You can be sure I will fight against overreach by the federal government, like Joe Biden’s 30x30 land grab and the Waters of the U.S. rule, and I will stand up to radicals who want to use fake meat to put Nebraska agriculture out of business. In Nebraska, we feed the world—we don’t need government throwing up unnecessary regulation and red tape to stunt our innovation.

I will fight the socialist agenda at every turn. I believe in American exceptionalism, innovation and a good old-fashioned work ethic. I will oppose anything that will put government bureaucrats between patients and doctors and any policy that penalizes hard-work or incentivizes government dependency. We will stop efforts to implement massive new regulations that will kill jobs and harm our economy.