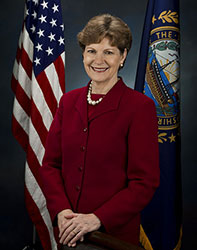 The first woman in U.S. history to be elected both a Governor and a United States Senator, Jeanne Shaheen has been committed to serving the citizens of New Hampshire and is known for her common-sense leadership, hard work and dedication to improving the lives of the middle class. She has served in the United States Senate since 2009 and is a member of the Senate Committees on Armed Services, Foreign Relations, Appropriations, and Small Business and Entrepreneurship.

Senator Shaheen has become a champion for families facing hardship. She led Senate efforts to pass a critical extension of unemployment benefits to help struggling families. Her state staff has made it a priority to help out-of-work families navigate the federal bureaucracy, including thousands of families facing foreclosure.

To strengthen the economy in the long term, Senator Shaheen is committed to addressing the federal government’s long-term deficits. In the Senate, energy efficiency has remained a priority for Shaheen and she has introduced a bipartisan debt-reduction plan, and has introduced bills to reform our budget process, and to phase out unnecessary subsidies for U.S. sugar growers and for gold and silver mining. She cosponsored measures to cut government spending on vehicles by 20 percent and to eliminate unneeded tax breaks for major oil companies and ethanol production.

As a long-standing advocate for energy efficiency, Shaheen created programs while Governor that saved New Hampshire families and businesses over $1 billion through energy efficiency. In the Senate, Shaheen introduced bipartisan legislation that would create a national energy efficiency strategy to foster job creation, save businesses and consumers money and reduce pollution. She was successful in passing several provisions of her energy efficiency plan that will help businesses create jobs and consumers reduce energy costs. According to a study by the American Council for an Energy-Efficient Economy (ACEEE) Shaheen-Portman is estimated to create more than 190,000 jobs, save consumers $16.2 billion a year and cut CO2 emissions and other air pollutants by the equivalent of taking 22 million cars off the road - all by 2030.

As a member of the Armed Services Committee, Shaheen has also continued the work she began as Governor to protect jobs at the Portsmouth Naval Shipyard, Pease International Tradeport and New Hampshire’s defense-related companies. She has worked to ensure that policies supporting our active-duty troops are accessible to our National Guard forces and their families as well. As a member of the committee, Shaheen is in a strong position to advocate for military families and programs that are important to New Hampshire and the nation - including the Portsmouth Naval Shipyard and Pease Air National Guard Base.

Shaheen also serves on the Senate Appropriations Committee, where she is the Ranking Member of the Subcommittee on Commerce, Justice, Science and Related Agencies. After balancing a budget as a mother, small business owner, and governor, Senator Shaheen understands that every dollar we spend must deliver results. She is committed to fiscal responsibility and knows that public officials have a fundamental duty to make sure taxpayer money is used effectively and efficiently.

Shaheen served as Governor of New Hampshire from 1997 to 2003. During her time in the statehouse, she helped create nearly 67,000 new jobs while keeping New Hampshire’s tax burden the lowest in the country. (Learn more about Jeanne Shaheen’s three terms as Governor.)

Between her time as Governor and election to the U.S. Senate, Shaheen served as the Director of Harvard University’s Institute of Politics at the Kennedy School of Government.

Shaheen was born in Saint Charles, Missouri. Her father worked his way up to a management position in a shoe company and her mother worked as a secretary in their local church. After attending public schools, Shaheen received a bachelor’s degree from Shippensburg University in Pennsylvania and a master’s degree from the University of Mississippi. She and her husband, Bill, live in Madbury and have three daughters, Stefany, Stacey and Molly, and seven grandchildren.

While there is no average day in the Senate, you can get a better idea of what Senator Shaheen does when she is in Washington and New Hampshire by reading “INTERN CORNER” a special section on Facebook written by the interns in Senator Shaheen’s office.